have often described Magic as a game of two-drops.

Ever since a couple of uppity Ironclaw Orcs decided they could tussle with Necropotence's ponderous Order of the Ebon Hand, or even sneak past the odd Erhnam Djinn, what a player has done (or could stop) on the second turn has been a deciding factor in that player's—and that deck's—success. In a world that once consisted of Orggs, Serra Angels, and Shivan Dragons all played in the same deck, the two-drop redefined how Constructed Magic was played.... You could no longer sit there and do nothing for four turns and expect to be able to win.

In recent years, particular Magic formats (especially Standard formats) have become more and more narrowly defined by the two-drops of the day, and those particular two-drops have done more and more, especially considering their meager mana costs; R&D has deployed Grizzly Bears updates like Wild Mongrel that get all of a single block's mechanics rolling, plus end up being important mile markers in Standard—and even Extended—for years (or at least "year") past their initial Block Constructed windows.

Not long after Wild Mongrel, we had the centerpiece of the monstrous Affinity deck, Arcbound Ravager, absolutely the only two-drop good enough to supplant Wild Mongrel (which itself had only recently pushed out River Boa) as the best offensive two-drop ever. Like Wild Mongrel, Arcbound Ravager made its block's mechanics fire like pistons in the Mach Five... But unlike the Odyssey block version, it got to keep its boons and boosts more or less forever (rather than letting go after only a single turn).

Quite surprisingly, last summer, the unthinkable happened and we got Tarmogoyf, almost certainly better than both Wild Mongrel and Arcbound Ravager... certainly more flexible, a two-drop with all the size of a turn-four or -five Arcbound Ravager... but with none of the Fairy Godmother's requirement of sacrifice. Quite possibly the best two-drop of them all, Tarmogoyf has been a staple of almost every Constructed format since its first appearance as an available threat, a finisher in control, an automatic four-of in beatdown, a sideboard card in black-blue, even the red-headed stepchild of the odd Extended Affinity deck.

Most recently Gaddock Teeg showed us yet another format-defining two-drop. While not as massively played as Wild Mongrel or Tarmogoyf, Gaddock Teeg remains an important limiting factor for any format where he is legal to show up, a spoiler for Dread Return, the stop sign that protects the swarm from Wrath of God, a worthy inheritor to the meddling legacy of Chris Pikula.

All the while, Magic formats have been peppered with Meddling Mages, Gaea's Skyfolk, Tallowisps, Dark Confidants, and Wren's Run Vanquishers... all different looks at the mighty two-drop, effective and important team members providing disruption, evasion, tutoring, card advantage, and tempo even when not the absolute best play on that second turn.

Now with Eventide we have yet another different look at the two-drop. This time it is even bigger than Watchwolf and Scab-Clan Mauler... while being strangely reminiscent of Rudolph the Red-Nosed Reindeer.

I mean, what kind of two-drop can you not play on turn two? 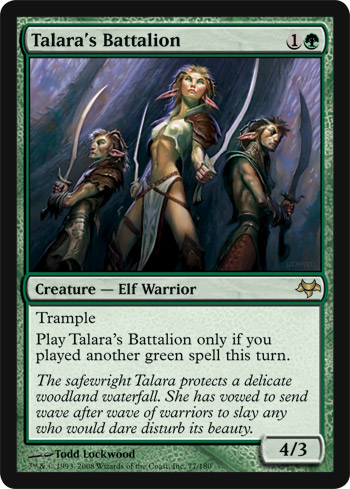 So what do you get for your two mana?

Talara's Battalion is bigger than what we would already currently consider a great deal for two mana. It out-classes Spectral Bears, Mogg Flunkies, Watchwolf, Scab-Clan Mauler, Keldon Marauders, and Wren's Run Vanquisher up front, a 4/3 creature for (typically) the cost of a 2/1 or 2/2.

In addition, Talara's Battalion has trample. Often overlooked, trample can be a big deal in a bigger creature. In this case, Talara's Battalion is larger up front than other creatures that are in its general weight class, and is discounted by one to two mana. So when it crashes in, should Talara's Battalion get blocked for a chump or trade, it can typically expect to sneak in a point or points of trample damage.

Lastly, Talara's Battalion is an Elf Warrior, making it eligible for any Imperious Perfect or Obsidian Battle-Axe shenanigans you want to build into your sixty.

In a uniquely green way, Talara's Battalion might actually encourage players to go old school Boon, transforming Giant Growth into a Dark Ritual. Think about it: All things held equal, Talara's Battalion is worth more than two mana; the best 3/3 threats in green for two mana are pretty aggressively costed, and the Battalion is 33% bigger on the front side than either; it fundamentally shaves two full turns off the clock to 20 life. So how would the Giant Growth model work? You run out a guy on the second turn (let's say the ever popular Wren's Run Vanquisher) and predictably attack with it on the third turn. You decide to go big Ball Lightning ups, and point a Giant Growth at your red zoning Vanquisher. Not only do you get to do 6 points, but you've already fulfilled the condition you need in order to play this new threat! In this way, you can convert an efficient packet of damage into a unique kind of mana acceleration.

Of course, there are some free ways to play Talara's Battalion, such as dumping a Nourishing Shoal... but that seems to be a little much to pay just to get a 4/3 body into play on the cheap; of the various possibilities for pushing this card down, I see dropping free spells as being pretty remote.

Talara's Battalion is not the most consistent threat in all of Dominaria. Not only can it not be played on the second turn, but it is a simply atrocious topdeck when you're running on empty. What happens when you don't have another green spell to play? Can you think of anything more embarrassing than pulling a second Battalion? Talk about having gummed-up works! You will be stuck until such time that you can run something out so that you can run this one out. There are certainly lots of obvious reasons why Talara's Battalion looks limited on its face... But we play cards with disadvantages attached all the time because their best performances are just so good.

In a set of linear sets, the disadvantage printed on Talara's Battalion may actually inform us of the best place where it can be played. If our goal is to make sure that we have green cards to fuel it, in order to make best use of Talara's Battalion... maybe we should only run green cards! While this creature can probably contribute in Black-Green Elves, green-red aggressive decks, or maybe even green-white due to its sheer size, we can minimize the downside if we try to apply it to mono-green. Unlike a lot of decks that try to mete out just one or two gigantic attackers in order to minimize the loss of card advantage should the opponent successfully sweep, today's mono-green decks spread as many monsters onto the board as they can (and already run the aforementioned Bramblewood Paragon) in an effort to get the biggest and fastest Overrun kill. Speaking of which... playing Garruk Wildspeaker, using Garruk to untap two lands, then finishing the turn with Talara's Battalion thanks to those two lands is perfect on both counts, paying off Talara and suspending the Overrun.

The last time I, personally, had the opportunity to play a four-power two-drop, it was Flesh Reaver, another "terrible" creature if ever there was one. But it was so big, so awesome on the board, that it got multiple PTQ wins on the same last day of the same Extended PTQ season, mashing past Wall of Roots and racing Steel Golem all tournament. The up-side of Flesh Reaver was so high that we looked past the disadvantage to play it in a deck that could take advantage of the card's natural size and speed.

Similarly, you can look at a card like Kavu Predator and see nothing but question marks. I guess it is a 2/2 for two, you might think... but what is this about gaining life? It is not until a card like Grove of the Burnwillows appears and we see how the strange clause on the Predator can be used to our advantage that the true potential of the card is revealed.

In a sense, Talara's Battalion is reminiscent of another four-power trampler: Arrogant Wurm. Arrogant Wurm was basically a Durkwood Boars going the wrong way, no way good enough for Constructed deck, but when paired with Wild Mongrel, Aquamoeba, and Merfolk Looter, Arrogant Wurm was so good as a three-mana spell that it was worth the downside of sometimes lollygagging as a Fangren Hunter... and in fact, Arrogant Wurm was heavily played in every appropriate deck from its first appearance on up to, if not the present day, the most recent instances of tournament Madness builds; Billy Moreno once told me that Arrogant Wurm was better on three than Psychatog in his PT finals Mad Tog 2020 deck!

All together, these elements, contextualizations, and memories seem to imply that to make Talara's Battalion good—or potentially great—we just have to position it in a deck that can make use of its unique mix of costs and incentives. Just like you don't play Arrogant Wurm in an Affinity deck or Arcbound Ravager in a Storm Combo deck, maybe Talara's Battalion's best destiny is simply to push mono-green attack decks to the next level of Overrun overload. Look back at the history of Mogg Flunkies and Erg Raiders, every Scab-Clan Mauler and Keldon Marauders. Sometimes the biggest two-drops come bundled with compromises... but they end up defining the careers of future Hall of Famers, laying down the framework for tomorrow's next great design theory, winning Pro Tours, or just beating the snot out of people who don't respect them enough, initially.