f you read Card of the Day you know by now that I enjoy delving into Gatherer to find you interesting facts about cards. And if you read Arcanas (like you are right now!) you know that we like to show off our beautiful art. And in both venues, we share bits of worldbuilding information. So for today's Arcana, let's do all three!

We'll start with the art of Spirit of the Labyrinth. Here is the art description:

Action: Show a spirit of the Labyrinth. She is sitting on a white marble throne that is carved in labyrinthine patterns. There are maze motifs all about and her costuming, patterns on her skin, are matching the pattern on the throne. 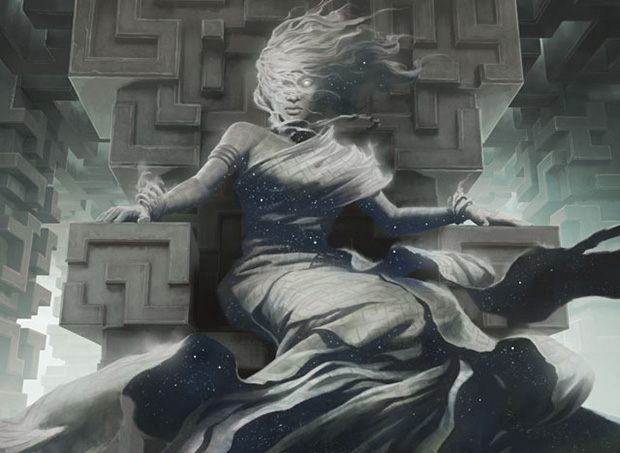 Spirit of the Labyrinth | Art by Jason Chan

Now, how about those Gatherer tidbits?

The Dekatia Academy, as mentioned in Spirit of the Labyrinth's flavor text, is kind of a big deal in Meletis (one of the three major poleis of Theros), and as such has been mentioned in Uncharted Realms (our weekly storytelling column):

And if you'd like to know more about it, the "Planeswalker's Guide to Theros, Part 2," has you covered.

But as a special bonus to you, reader of this Arcana, the creative team gave me permission to share a little more information about the Dekatia, taken from the Theros World Guide:

The Dekatia, the legendary academy at Meletis. There are many centers of learning in Meletis, but the most elite academy for philosophers and mages is the Dekatia. After receiving basic education elsewhere, the wisest and most promising thinkers and mages spend ten arduous years training at the Dekatia, apprenticing to master priests, thaumaturges, and military heroes. Those who make it through their apprenticeship are considered some of the wisest and bravest heroes in the land.

There's a lot we can learn about the game and its worlds by looking a little deeper into a single card. I hope you've enjoyed today's in-depth look into one from Born of the Gods!