Is There Any Doubt?

there was any doubt about the dominant deck in Mirrodin Block, this past week's Grand Prix New Jersey may have just eradicated it. As faithful sharks trying to sharpen your dorsal fins, I'm sure you all followed the New Jersey coverage here on magicthegathering.com. But if you missed it, you can go read up on the event coverage blow by blow in the Tournament Center.

For the convenience of our discussion, I will list the Top 8 deck lists here:

You saw that right. Of the Top 8 finishers, five of them were playing Ravager Affinity with Aether Vial. Even if broad Affinity had previously cemented itself as the top deck in Mirrodin Block, the correct build was still up in the air. For example, though Osyp Lebedowicz won GP Orlando with Vial Affinity, that same Top 8 featured a Paradise Mantle based Affinity deck in the hands of Osyp's fellow PT Champion, Billy "Baby Huey" Jensen. If you recognize the awesome power of Ravager Affinity but want to break from the pack somewhat, you can try a deck like Baby's, from the GP Orlando Top 8 decks page:

When an Aether Vial player faces off against a Paradise Mantle player, the cliché is that the Vial player's deck is pretty predictable (just look at the listings from New Jersey's Top 8, where the decks are very similar), whereas the Mantle player can be casting pretty much anything. Even though Vial ended up dominating New Jersey, many notable players such as PT San Diego Top 8 competitor Mark Herberholz strapped on Paradise Mantles to increase both the flexibility and speed of their decks. The Mantle version is "a quarter turn faster" according to some pundits due to both its zero mana contribution to the Affinity mechanic and its ability to help support main deck Sharapnel Blast by providing red mana. That said, it was Vial Affinity that dominated the most recent -- and arguably most competitive -- Mirrodin Block Grand Prix.

The Aether Vial decks in the Top 8 of the largest North American Grand Prix to date can be split into three camps. The first is Ty Dobbertin's deck. Dobbertin's modifications to the core that Frank Karsten put on the map and Osyp Lebedowicz carried to victory are pretty minor, for the most part shuffling around cards that were played in the sideboard, such as Shrapnel Blast, and playing the fourth Great Furnace, which is pretty common. Dobbertin's version seems consistent and powerful, as well as being capable of stealing the first game with an unexpected Shrapnel Blast.

The most numerically dominant faction, of course, is that represented by National Champs Jeroen Remie and Eugene Harvey and former New Jersey State Champion Adam Horvath. The story says that PT Champions Kai Budde, Jelger Wiergsma, and Jeroen Remie worked with Team CMU-TOGIT for this Grand Prix; these Europeans were coming to the country anyway in anticipation of other tournament events, and decided to hit town early to run GP NJ.

This union was clearly a strong one, and produced a defensible break in the format. Their major change to the Vial Affinity deck -- the replacement of Darksteel Citadel with Tree of Tales main deck -- seems minor, but its implications are profound. First of all, this version of Affinity no longer has to devote a huge amount of sideboard space to Tree of Tales to bring in the green package of Oxidize and Viridian Shaman. Secondly, this change is a commentary on the environment itself: it says that this Affinity deck no longer needs Darksteel Citadel backing up Glimmervoid, that it doesn't expect the opponent to go after lands. Either that means that CMU-TOGIT and its European allies thought that the average player was getting better, or that more players were playing Affinity (which doesn't typically have main deck artifact destruction), or both. Last, and significantly, there was room in the side for Moriok Rigger, a powerful non-artifact threat that rewards an Affinity player in any number of situations (against dedicated artifact hate, against opposing Arcbound Ravagers, in concert with one's own Arcbound Ravagers), and additionally cannot be destroyed by the typical anti-Affinity options of Oxidize, Tel-Jilad Justice, or, especially later in the game, even Electrostatic Bolt.

Brian Kibler went one better and started Moriok Rigger. To this shark's mind, Kibler's list is the most interesting, but for its sideboard. Instead of going with the green plan of the other four Vial Affinity decks in the Top 8, Kibler went with Relic Barrier, a reprint from Legends that both helps his Affinity and can play many roles. Relic Barrier is Rishadan Port and Master Decoy; it defends consistently against opposing Cranial Platings, and, unlike traditional removal cards, can slide from threat to threat as the turn says a different artifact is now the most dangerous.

So is there any doubt? Even among the clearly dominant deck, individual decisions are still up for grabs... And that's not even considering the other three decks to make Top 8.

The most unusual deck in the Top 8 was clearly Jan Holland's Cog Control. Holland's cards flow into one another nicely... He can dig up a Bauble, Spellbomb, or Engineered Explosives ("X" can be "0") with a Trinket Mage. After grabbing the card he needs, Holland can renew its usage turn after turn with Auriok Salvagers. He can hate out Affinity with main deck March of the Machines and back that defense up with Pulse of the Fields and Purge. Though not as explosive as Affinity, Holland's deck may boast the most sustained power of any archetype in the current environment. 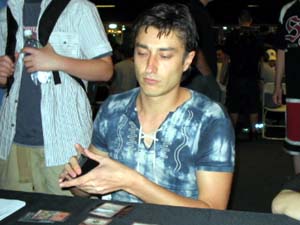 The breakout deck of the tournament, of course, was a new version of Tooth and Nail. Alexandre Peset continued a blazing rookie season and Jeff Garza backed up his Top 8 performance in Orlando with a first place win. The main innovation here is a simple one: the addition of Electrostatic Bolt. Though typically thought of as a card for Affinity, Electrostatic Bolt gives Tooth and Nail a considerable boost against the deck that stole the PT Kobe title from it back in February. While Tooth and Nail is exceptionally powerful, traditional versions have almost no game against Slith Firewalker. Slith Firewalker comes down before Tooth and Nail's defensive drops, gets out of hand quickly, and does a ton of damage to set up Big Red's considerable burn suite. But with Electrostatic Bolt, Tooth and Nail can contain the Firewalker and buy enough time to cast its game winning sorcery. By some accounts, the main deck matchup against Big Red went from 20% to 60% with the minor addition of a few red instants.

So is there any doubt?

Even with Vial Affinity dominating five of the eight spots in the elimination rounds, and three of the Top 4, there has to be a little doubt regarding the best deck in Mirrodin Block. Had Jeff Garza finished second to Kibler, there might not be even a shred remaining, but the fact that Garza tore through so many artifact decks in such capable hands says that maybe Tooth and Nail represents a glimmer of hope in a format that is typically looking for a Glimmervoid to cast its game-winning Disciple of the Vault.

The Philosophy of Fire

I got a number of inquiries after last week's mention of The Philosophy of Fire. Briefly, it is a method of playing red spells that was first described to me by my Wednesday tag team partner here on magicthegathering.com, Adrian Sullivan, half a decade ago. Rather than counting cards in relation to other cards (as with the “card advantage” of a single cycled Krosan Tusker representing two cards), the Philosophy of Fire counts cards in relation to damage in aggregate; if you consider a Shock as the baseline at two damage, you only really need a total of ten cards to win the game by burning the opponent directly. Other theorists have since run with Adrian's idea, and it has become an important topic of recent, and one whose scope eclipses the space that I can devote to it here. Noted Internet columnist and PT Tokyo winner Zvi Mowshowitz wrote a reaction to the Philosophy of Fire that you can read here. (Special thanks to Brainburst.com for making this previously subscription-only article available to the public for us to link to).