There is No Eye in Team

to this old house of cards! As you probably all know, Future Sight is almost upon us. At the time of this writing (Spring, 1974), the complete spoiler, sortable or not, is not yet available. Since I can't see into the future, I figured I'd do the next best thing and consult those who (probably) can. I'm talking about giant floating eyeballs. Incognito, oxymoronic planeswalkers. Watchers. You know, creatures and players with extraordinary vision.

The question then is: How can I build some decks with future sight without actually using Future Sight?

Sliver of the Mind's Eye 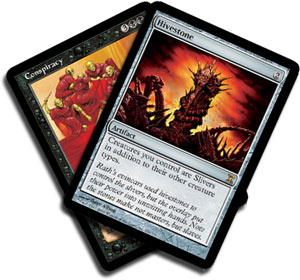 The answer, of course, was staring me square in the face, and it took an email from Ryan B. to make me slouch a little less and take notice. You see, Ryan was having some fun with the Evil Eyes of Magic. Hailing from Orms-by-Gore, a sort of Stratford-upon-Avon for the monocular set, and the great wetlands of Urborg, the Evil Eyes don't play well with others (and probably run with scissors). When you've got a non-Mistform Ultimus Eye on the table, all of your non-Eye creatures can't attack. Which is kind of a bummer, let's be honest. At this point, you have a few options. You can either play with no non-Eye creatures, or you can start messing with creature types. Ryan chose the latter, opting to use Conspiracy to turn all of his creatures into Eyes.

But that wasn't enough. Sure he got the Eyes to work as a team, but they didn't really change. They were still self-absorbed 3/6s and 6/3s that only really cared about me, myself, and Eyes. To remedy this, Ryan decided to pair them with the hive-minded Slivers, whose mentality is completely antithetical to that of the Evil Eyes. How? With the aid of a little Time Spiral artifact: Hivestone!

You'll want to play Conspiracy (choosing Eye) and Hivestone as closely together as possible, and in that order. Conspiracy will overwrite all existing creature types and make them "Eye," and the subsequent Hivestone will add the Sliver subtype, making all of your creatures Sliver Eyes. Played in reverse order, Hivestone would add the Sliver subtype, which would then be overwritten by Conspiracy. The reason you'll want to play them back-to-back is that a Conspiracy set to Eye will make your Slivers, how do you say, suboptimal. They'll be creatures with the Eye subtype, but they'll still give their abilities to other Slivers. Of course, you won't have any of those any more. You're basically left with a bunch of Grizzly Bears, Gray Ogres, and vanilla 2/2s for four and 3/3s for six, which thankfully aren't common enough to warrant a nickname yet.

However, if you just have a Hivestone in play, along with some Evil Eyes, your situation isn't quite so bad. Your Sliver still won't be able to attack, but your Evil Eyes will get all the Sliver bonuses. I highly recommend double striking with a hovering eyeball.

Just in case the whole Eye-Sliver cross-breeding thing doesn't work out, you can always use Basal Sliver to power up a Demonfire. You can make extra Slivers to sacrifice with Kher Keep, once you get either Hivestone or Conspiracy and Hivestone in play.

Future Sight definitely has some goodies for this deck, including Frenzy Sliver and the Slivercycling Homing Sliver.

The Future's so Bright, I Gotta Wear Urza's Shades

One thing you might not know about me is that I'm blind as a bat, myopic as a mole (or, in Magic terms, a creeper). Perhaps this explains my near-constant misidentification of the genders of Legends. My apologies go out to various champions of Kamigawa, as well as Tibor and Lumia (Would it have been so hard to go by Mr. Tibor and Ms. Lumia, or vice-versa?). The sorry state of my vision might also explain my occasional trouble reading some of Magic's friendlier cards, like Norin the Wary (I could've sworn that guy was more powerful) and Giant Solifuge (I could've sworn that guy was tougher). One card in particular was very difficult for me to read, or at least, get a read on: Sarpadian Empires, Vol. VII. I really enjoyed this volume. It was much better than volume VI, and it made a mockery of the prequels (which probably goes without saying).

The card itself seemed like fun, opening up a number of deckbuilding possibilities, mostly along tribal lines. You can choose to make white Citizens, blue Camarids, red Goblins, green Saprolings, or black Thrulls, but only one kind per book. That's a lot of options, but I couldn't really see using more than two of them in any given deck. Surely there had to be a good reason to want to make Citizens one game, Goblins the next, and
Camarids the game after that. Eventually, I stumbled upon the card that would give you such a reason: Spreading Plague. Whenever a creature comes into play, Spreading Plague destroys all creatures that share a colour with it (the creature, not Spreading Plague). Once you find out what colour of creature your opponent is playing,
you can start pumping out creatures of that colour with Sarpadian Empires, Vol. VII. It's like a repeatable Wrath of God! The all-coloured Transguild Courier and Crystal Shard (to bounce it) combine with Spreading Plague for an even more devastating effect. Add Kher Keep to the mix to further annoy those pesky red mages!

Another card that fits the deck (and the loose theme) is colour-manipulating Invasion rare Blind Seer. Apparently, this guy is actually Urza in disguise. This should not come as a surprise, since about half the artifacts in Magic history represent Urza's eyewear. Glasses of Urza, Sunglasses of Urza, Urza's Contact Lenses... The list goes on and on. Or stops right there. In any case, Blind Seer has a sort of sixth-sense when it comes to avoiding the Spreading Plague. You can use ol' Urza to thwart any funny stuff from your opponent, like trying to get away with playing creatures that don't share a colour.

To avoid losing too many of your own creatures to Spreading Plague, you can simply play with colourless creatures, which are almost always artifact creatures. I wanted to use something big and fun as a finisher, so I picked Bosh over Sundering Titan. Not only can Bosh chuck stray artifacts at your opponent's noggin (he really likes throwing books), and not only can he (hopefully) lead the Toronto Raptors to victory over the New Jersey Nets, but he also fits the theme. How? He's an EYE-ron Golem, of course. Er. Moving along. Here's the deck:

As Far as the Scry Can See

Not very long ago, in a galaxy far, far closer than you might expect, a helpful mage by the name of Redland Jack sent me an interesting decklist. The goal of the deck was to play Spellshift on one of his cantrips, "polymorphing" the little spell into a big one, the Sleight of Hand into a Storm Herd. He used a number of cards to set up the top of his library in order to make sure that the Spellshift shifted into the right spell. These included Sage of Epityr, Survivor of the Unseen, and Telling Time. Hmm, now that I think of it, those are all pretty thematic. Still, I wanted to so something a little different, something a little more futuristic. I wanted to use the Eyes of the Watcher, a card BDM previewed on this very site, exactly thirty years ago today! Who could've ever predicted that I'd be writing about it now?

To maximize Eyes of the Watcher, I filled the deck to its brim with instants and sorceries. Some of them are for digging early and getting countered by Spellshift late, like Opt, Serum Visions, and Telling Time. Others are there to make sure that you don't end up at 2 life by the time you fire off your Storm Herd, like Pulse of the Fields and Wrath of God. The Pulse is particularly nasty with Eyes of the Watcher, since you can keep replaying it as long as you have a lower life total than your opponent. Future Sight itself is a fine card in a deck that does a lot of scrying, whether it's with Serum Visions, Condescend, Eyes of the Watcher, or Coldsnap rare, Scrying Sheets (which doesn't actually have scry, but it works well with that particular keyword).

Lastly, I included a single copy of Eye of the Storm, because all the kids are putting an Eye in their Spellshift decks. For good reason, too. Once you get Spellshift on the Eye along with another spell, you can almost always play every spell in your deck. Just keep using Spellshift to counter one of the other copied spells. You'll dig up a fresh instant or sorcery to restart the loop.

I would've included some Sensei's Divining Tops in the deck, but I'm neither a masochist nor a sadist. Feel free to use 'em if you got 'em, because they'd definitely be effective.

3 Pulse of the Fields 2 Eyes of the Watcher

My first instinct was to use black in that deck, because it gives you Lose Hope and, more importantly, the deck-stacking of Insidious Dreams. I'm just not sure what you would want to Spellshift into. Red would also be a fine choice, with Magma Jet and perhaps Searing Wind as the Spellshift-able win condition.

Of course, there are plenty of new scrying cards in Future Sight which would fit neatly into the blue-white version of the deck. You could even adapt it for Standard play. Cryptic Annelid (a.k.a. Scryborg), Foresee, Mystic Speculation, and Judge Unworthy all seem like nice cards for a control deck. If only there was a substitute for Future Sight itself.

Until next time, see, eye told you so.