They’re Back, and Bigger Than Ever 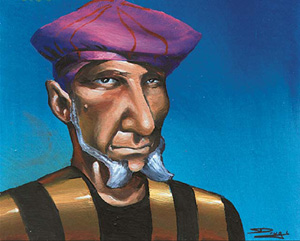 yes, the timeshifted cards. Old friends back in town. Well, as time passes we get to thinking about old pals and we come to realize that some of them were not as cool as we thought they were, and others turned out to be underappreciated back in the day.

When I look over all the timeshifted cards, my feelings swing from awe to “eew.” I cannot help but see the art first. It is how I looked at cards back in the old days, and it is how I tend to look at these. Of course, there have been many years in between where I looked at mechanics and such, but this return to the past has swept me up and rewound my perspective too.

I recall a meeting we had at Wizards when we gathered to look at a slide show of all the Time Spiral cards once the final touches were finished up. As we cycled through the timeshifted cards, the peanut gallery would often break into laughter or cheers of welcome for a favorite card from back in the beginning. But there was also one remark, (from a source who will remain unnamed,) that I did not expect. This person had been a strong proponent of nostalgia and the wide-open feel of early Magic art. The statement made, after about half the set had been seen, was something close to, “Wow, there used to be some really bad art.”

The funny thing about that statement is that, this person, and many of the rest of us, love the old Magic art. For years, this so-called “bad” art was inspiring us and captivating us. So what gives here? Was it bad or was it inspiring? My short answer is that it was both. The cool thing about the timeshifted cards is that we get to play with the bad old stuff and the good old stuff and all the new stuff all at the same time. It gives us the ability to look at it all together, in the now, instead of in the isolation of their own eras. It’s like having a football all-star game with Johnny Unitas, Barry Sanders, Steve Largent, Lawrence Taylor, Bronko Nagurski, Ray Lewis, and Charlie Frye all in one game. (OK that last one was wishful thinking.) We can stop talking about which cards might stack up well against others and actually see it. We can stop thinking about how we felt about cards way back when we took our Mr. Hero paychecks straight to Joe’s Comics and Cards Emporium.

I decided to withhold the name of the person who made this comment about the old Magic art because it’s not important who said it. But I cannot withhold my own name, since it’s right there at the top and bottom of this page. Everything I say has some inkling of an official word of this website and, in some regards, this company. Because of this, and other reasons, I will not (and probably should not), say which Magic art I think stinks up the place. I also think it would be pretty poor form for me, as a Magic artist, to use this forum to rail on my fellows. I know that the desire for definitive art talk is strong. This website’s bread and butter is the weighing of the good against the bad, and opining on which cards are the secret tech and which are bound to do you wrong. Unlike card designs, card art cannot be discussed in this way. No artist goes into an assignment thinking, “This art should be appreciated by most Limited players, but reviled by the Standard Constructed crowd.” And of course, no artist goes in trying to make a complete flop. But some cards are created to suck. On purpose. (All emails on this topic should go straight to Mark Rosewater.) This is why we can say Chimney Imp sucks. But I will not come out and say the art on Chimney Imp sucks. That would be really uncool of me to bag on Chris Moeller specifically.

I can tell you, however, non-specifically, that there is a foul effluvium steaming up from more than a couple pieces of timeshifted card art.

But enough of the negative. I also see in the timeshifted cards some absolute gems. It is from these that I got my inspiration for this article. (Well, these—and the overwhelmingly positive response we get when we show you the art in larger formats.) But first, a little aside.

Just recently I finished two pieces of art for Future Sight, the third set in the Time Spiral block. One of the two made me extremely proud, and still does. This is very rare—usually I start dissecting my own work within minutes of completion. The second one was completed, and then sat upon my desk for three days before I packaged it up and sent it in. For three days I considered whether or not it completely sucked. I was almost embarrassed to send it in to Jarvis. Then a strange thing happened. Nobody had anything at all to say about the painting that I loved, and Jarvis sent me a message just to pat me on the back for a job well done on the painting that I thought was a turd. The lesson here, folks, is that art is not a world of “good” and “bad.”

And that is what got me to change my mind about this article. I was going to roll out a cavalcade of all the ass-kicking timeshifted art in large format. Instead, I decided not to decide what is good and what is not and roll out a parade of a smattering of art I love, some I hate, and some I think is just solid stuff. This way, you can love the ones you love and plug your nose at the ones you think stink—all without the influence of the dork who writes this column.

The coolest thing about this is that some of this stuff is so old that it may have never been on magicthegathering.com at all, let alone all big and beautiful. In fact, the art from the first few Magic sets was all done at about 7 inches wide by 5 inches tall. The images you’ll see here could be, depending on the size of your monitor, original art size or larger! Anyhoo, enough art talk, let the art walk!