and two friends walk into a PTQ…

It is not the start of some bad joke. Rather it is my way of opening this article to let you know that the Team Limited season is getting underway. Team Limited is my all-time favorite Magic format and not just because it is the only format I have ever won money at on the Pro Tour (although it does give it quite the boost).

Wizards is trying to nudge the schedule of Pro Tours so that the seasons line up with the calendar year—in other words having Worlds close out the year in November or December as opposed to holding it in August with confusing labels like 2003-04 World Championships. In order to get that process moving along we have been graced with a second Team Limited Pro Tour—this one near the home office in Seattle—and the obligatory Qualifier season to accompany it. This means that if you have ever aspired to qualify for the Pro Tour you get one more crack to do so via the most accessible of all the PTQ seasons. 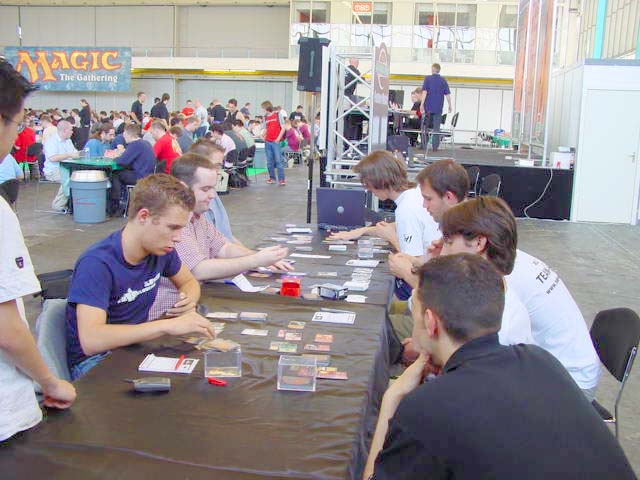 In the Team Limited format you play in three-person teams and your team’s performance is tracked by the combination of your three DCI numbers. The team PTQ season is not as long as most other seasons and there are fewer PTQs and Grand Prix than for individual seasons. Despite this it is still one of the easiest Pro Tours to qualify for. Unlike other Pro Tours where there are a fixed number of rating invitations handed out to the Top 50 players that are previously unqualified, the Team Pro Tours offer invitations based on a rating plateau of 1750. This means that every team that achieves a 1750 rating or better by the ratings published on May 26th, 2004 is automatically qualified for Pro Tour Seattle.

Because each team starts out with a fresh rating of 1600 whenever they play with a new combination of DCI numbers most matches are played for a full half the amount of the tournaments K value. Meaning if you play in a 32K tournament and your team is starting out at 1600 when you face another 1600 point team the winner of the match will earn 16 DCI rating points. If your next round opponent has a similar rating (and they should) you will be playing for 16 points again. Since you always play a team with a similar record most of your matches will be worth 16 points or close to it.

In addition to the PTQs there are also Grand Prix Trials to boost your rating. They are usually 24K but they still offer a healthy leg up for your rating. There is not much time left before the Grand Prix in Washington, DC and Bochum, Germany but if you can’t make a PTQ this weekend the Trials are the next best thing ratings-wise.

The two Grand Prix events are going to be the mother lode for ratings points with three different high level team events offered. In addition to the Trial and the Grand Prix itself there will be another PTQ on Sunday. I’m not sure how many matches a team needs to win in order to reach 1750 but I’m sure you can get most of the way there over the course of the weekend.

Remember the Team Sealed flights at the last couple of Prereleases? Keep your team rating in mind when the Fifth Dawn prereleases roll around. You should also put a word in your local store owner/tournament organizer about running Team events before the May 26th ratings run.

Each team is made up of three players that are labeled A, B, and C. When two teams are paired up against each other the players with corresponding letter designations face-off in traditional fashion. You need two of your three team members to win their matches in order for your team to win.

For Team Sealed your team will receive a card pool made up from two Tournament Packs of Mirrodin and four Darksteel booster packs. From those cards you need to make three forty-card minimum decks and sideboards. You must assign each and every card to one of your team members. All the cards you don’t use are your sideboards but they must be divvied up between the three players.

If you want to practice building decks and get an idea of what you will have to work with/be playing against you can go through the Grand Prix Columbus Day One feature matches. Each feature contains two complete decklist and sideboard. If you combine the cards from both players you will come up with the equivalent of a Team Sealed card pool.

I strongly encourage you to sit down with your teammates and attempt to build decks with a couple of these before you go to a PTQ. Team chemistry can be as important—if not more so—than individual play skills. I have seen many a seasoned Pro Team sink under the weight of one ego maniac who wanted all the good cards to go into his deck. There is no “I” in “team” and all that. How you divide up bomb rares, artifact and creature removal, and equipment can make or break your team’s chances before you even play a match. You may want all the good cards to go in your deck but when you get mana screwed and need your teammate to pull a game out to save your team’s chances you may feel differently. 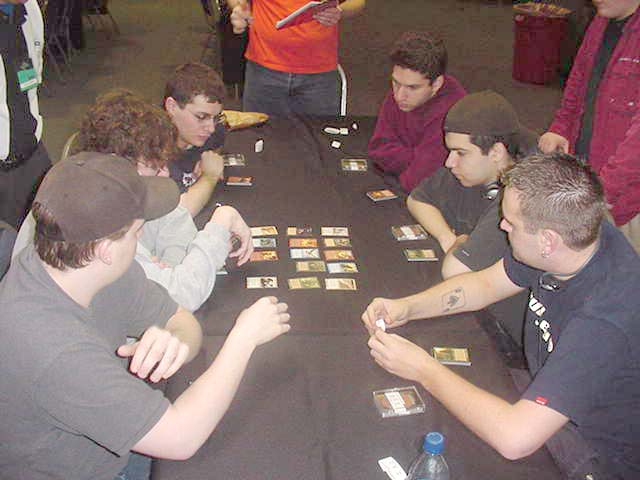 If you advance to the finals or Day Two of the Grand Prix you will suddenly find yourself playing Team Rochester Draft which is a completely different animal. In Team Rochester draft you sit around the table with your A and C players sitting diagonally across from their counterparts with the two B players staring down across the middle of the table. Each player is given two Mirrodin boosters and one Darksteel. The B player opens his/her pack and lays it out on the table. The team that opened gets to pick two cards before the opposing team gets the next three picks. Finally the third player on the opening team takes two cards and then the pick order changes and the opposing team get another three cards. Once the pack is depleted, the player to the left of the player who opened opens his/her pack and gets to pick only one card before the other team get three picks.

This continues around the table with the direction changing before the second set of Mirrodin packs and before the Darksteel packs. When all is said and done each player will have forty-five cards and full knowledge of what their opponent drafted. It is a tricky format but chock-full of strategy and gamesmanship. Each player builds a deck with the cards they individually drafted and faces off against the similarly lettered player on the opposing team.

Team Limited is a great opportunity to play Magic with your friends in a competitive environment. But if you can’t get you pals together to play don’t let that stop you. It is also a great opportunity to make new friends. There are almost always players looking to pick up a third player. You can use the forums on the Wizards site to look for teammates at a specific event and if you look at the page for Grand Prix DC you will find there is a forum set up specifically for players looking to form teams for the event.