Throwing it Back Red Style 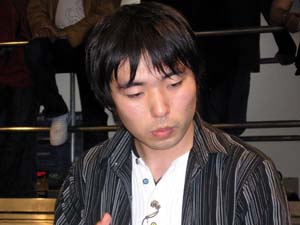 Shuhei Nakamura, PT Columbus '04oday we take for granted decks like the one Shuhei Nakamura used to make Top 8 at PT Columbus; mono-red beatdown decks with a ton of one-drops, a little utility, and a healthy amount of burn. But once upon a time, the principles that his deck were built upon were not only brand new, but actually scoffed at by most of Magic's Internet theorists. "It was just a lucky finish," said some. "I don't know how this deck wins," commented others. "Isn't it a bit outclassed?" asked most of the rest. But no matter what anyone said, a select group of faithful -- or perhaps those just a little ahead of the curve -- embraced a humble, even confusing, deck with entirely the wrong name, and helped change Magic forever.

It all started at a PTQ in Atlanta, during the first high point of Necropotence's long and decorated history. An odd looking deck with some atrocious synergies made us re-think how Magic is played, how we should put together decks, and when a game begins.

This deck was played by Paul Sligh to a second place finish in that PTQ, which explains the moniker "Sligh". In those days, second place would pick up a PT slot, so, along with a tiny bit of Internet hype, the name stuck. In reality, the deck (alternately called "Geeba" or "The Orcish Librarian Deck") was designed by Jay Schneider, a significant deck builder even today, whereas Sligh's namesake has been little seen or heard from in the past eight years.

If this deck looks... sub-optimal -- for example seeing Goblins of the Flarg alongside Dwarven Trader -- you must remember that during this first PTQ format, players were "Home-dicapped". Everyone had to play five cards minimum from each of the available card sets, including the much-maligned Homelands (hence the nickname). That is why you will find many old lists where Necropotence decks sideboard City of Brass and Recall or fast beatdown decks play Homelands lands that come into play tapped.

Even with its unfortunate limitations, the principles of this original deck changed how constructed Magic is played on a basic level, how players approach card selection in constructed decks so fundamentally that you might take its principles for granted today.

In the past, Magic decks started play around... turn four. The deck that won PT1 had a mana flashpoint at

for Wrath of God and didn't do much along the way. Its plan was totally confused, with far too many different ways to win and mana that is embarrassing from a modern standpoint. Maybe some decks started on turn two. The deck that came in second place did have a couple of Whirling Dervishes... and a couple of copies of Order of Leitbur. In the same deck. The idea that the beatdown should begin on turn ONE (excepting a Dark Ritual + Hypnotic Specter opening, of course) was totally foreign.

That original PT Top 8 had two U/W control decks, two G/W Erhnam Djinn/Armageddon decks, three crazily colored rogue decks, and the original mono-black Necropotence deck. Only one deck was one color, and it ended up being the most innovative of the bunch. In 1996, single color decks were the exception, not the rule.

Today, we don't see a lot of decks that play

two drops. We know that that is a recipe for disaster, or at least inconsistent openings. Today, competitive decks tend to tune their mana for consistent drops, not just pure card power.

Besides showing players that they could start the beatdown from the very first turn, the Sligh deck, as a single color design, emphasized consistency. Moreover, it scaled the number of cards chosen at particular converted mana costs based on consistent drops. While the original PT1 decks may have had clusters of pump knights, for the most part, they just played whatever cards seemed good, regardless of cost. Schneider's deck, on the other hand, sought to tap out every turn, filling in mana holes on turns one, two, three, and beyond. For a point of comparison, consider that one eventual Champion played a R/W deck at PT1 that included four copies of Orgg, Serra Angel, AND Shivan Dragon! Any of those creatures is probably better than Dwarven Lieutenant... but is any of them going to regularly do more damage in a game considering their relative speeds?

The concept of tiering one's drops based on playing a land and then tapping out came to be called the Mana Curve, and is a design principle that is used by every single viable tournament deck in today's constructed formats. Lose to a Lantern Kami, followed by a Leonin Skyhunter, then a Glorious Anthem? Thank Jay Schneider.

Did the Sligh deck give up card power, at least in relation to the decks of its era? It sure did. But because it started playing Magic earlier, Sligh could capitalize on a Wrath of God tap-out more effectively than its contemporaries. In addition, the low mana costs of the Sligh deck helped it break Strip Mine better than any other deck. While a G/W deck might be struggling to hit four mana for its Erhnam Djinn, Sligh could manage the opponent's lands, burn a blocker, and play out a 2/1 creature, knowing that a solid hit the next turn was inevitable.

Almost every player who has ever cracked a pack has probably tried to put together a burn deck, but Sligh was arguably the first tournament deck that looked to burn redundancy specifically. In the same way that it saw Dwarven Trader and Goblins of the Flarg as interchangeable, said that Ironclaw Orcs and Dwarven Lieutenant are about as good as one another by how they sat on the mana curve rather than reading their text boxes, the Sligh deck said "I know that Incinerate isn't quite as good as Lightning Bolt, but I'd rather be able to play with both than just choose the better one." In the halls of then-accepted Magic strategy, where the absolute best cards were almost universally chosen with an outlook to handle every kind of opponent, this was a maverick idea.

Last, and perhaps most interestingly, Sligh created a world where utility creatures were not only played, but celebrated. Cards like Swords to Plowshares held utility creatures back, but even before that premiere elimination spell rotated out of Standard, Sligh ran cards like Orcish Librarian ("the red Browse") and both Orcish Cannoneers and Orcish Artillery. While some players saw the synergy of those Orcs with Circle of Protection: Red or Spirit Link, Sligh just sort of said "all by themselves, these cards are just good against pump knights"... and they were. And they took down many an Order, many a Knight, and got pointed directly at plenty of players' faces too.

It is easy to see the influence of this important deck when we look at Nakamura's Columbus Top 8 deck.

With his many one-drops, the utility of his Grim Lavamancers, and the redundancy of his burn, we just say that Shuhei had better tools to work with than Jay did. But the legacy of Sligh is seen not only in the many Red Decks that have won major tournaments throughout the years -- the big wins from Dave Price, top finishes from Bob Maher, or the continuing reverence in the hands of Dan Paskins -- but in every beatdown deck dropping clocks on the first turn and every wily philosopher counting life points rather than cards in play.