Time for a Check-Up 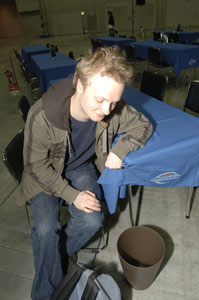 all! I'll apologize in advance if this article will turn out to be a bit shorter than usual, but unfortunately I got sick last weekend, when I had planned to write most of this piece. I might have actually chosen one of the worst days to get sick: Day 2 of Pro Tour–Yokohama. Bad timing indeed. I had to throw up all night and felt miserable in the morning, probably due to some virus or something I ate. I still decided to head back to the site and play Magic, because I could win a ton for playing on that day (I didn't expect to play my best game, but I was in a good position with a reasonable 6-2 record on Day 1, and I felt confident in my deck and experience). Most importantly, I am a fanatic; I didn't playtest for days and then flew all the way to Japan just to stay in bed! It was certainly a strange experience, playing with a bucket beside my feet all day and drugged with pain killers, but after eight more rounds I somehow ended up in tenth place. I'm still not sure how exactly I managed that in the state I was in, but I can't complain. After taking it easy on Sunday to recover, I fortunately feel much better again now. I would also like to thank everyone who looked after me on Saturday, even for little things like getting me some water got me through the day.

Time to talk some Magic again! I am planning to go over Time Spiral Block Constructed in detail starting next week. I will discuss the deck I played, the other major decks, some rogue builds, Future Sight additions, and the format as a whole. I had played loads of block games over the last few weeks—I am always a fan of Block Constructed—and I would love to share my knowledge in this column. Since the next Pro Tour Qualifier Season will be Time Spiral Block Constructed, I think that using this format as a major topic will be pretty useful for people who are tinkering with decks already.

As for now, I'll just quickly discuss what happened to White Weenie in the Pro Tour. Last week I showed a Magic Online 4x Premier Event where the Top 8 consisted of eight White Weenie decks. What was the amount of White Weenie decks in the Top 8 in Yokohama? Zero! The Pro Tour did not exhibit the same trend as Magic Online at all, mainly because the Pro Tour metagame had responded swiftly to this predicted sea of White Weenie. People had definitely tuned their decks against White Weenie, with maindeck Wildfire Emissary and Sulfur Elemental; even Fortune Thiefs were everywhere. White Weenie didn't even show up in the large numbers expected. This might also be due to the traditional control deck skew usually seen on the Pro Tour metagame. Most pros prefer to play control decks and therefore opted not to play White Weenie. Then again, I do not think that White Weenie should be discounted now. It's still a perfectly fine deck to enter (online) Time Spiral Block Constructed tournaments with. I would still consider a well-built version of White Weenie one of the best decks in the format. I know, for instance, that my fellow Netherlands residents Ruud Warmenhoven and Quentin Martin both played White Weenie to a 4-4 finish, which is not a discouraging record. Furthermore, if people start playing more of the green-red big mana decks from the Yokohama Top 8 (a pretty good matchup for White Weenie) or take out some White Weenie hate because they expect it less, then White Weenie is a smart pick. And also remember that there is a big difference between facing an average opponent playing blue-black Teferi Control with your White Weenie deck and facing Guillaume Wafo-Tapa. The blue-black Teferi Control players may have risen to the top in Yokohama, but the same does not have to hold for the Magic Online Premier Events.

It's time for the biweekly coverage again. In the following table I have listed the 20 most popular Standard decks as seen in the Magic Online Premier Event Top 8s of the last two weeks for which the data was available to me. Click on a deck to find a decklist and short explanation in my deck-o-pedia forum thread.

Dragonstorm remains the defining combo deck, and Red-Green Aggro has now clearly claimed the role of the best aggro deck. After those decks we have a ton of possible control variations, including Izzetron (which got a bit less popular but is still up there) and Solar Flare (which is getting more or less "rediscovered"). Dralnu du Louvre is definitely not as popular anymore as it has been. Pierre Canali told me in Yokohama about how they gave the deck (which Guillaume Wafo-Tapa was winning the Pro Tour with) the name "Dralnu at the swimming pool." They had a Dralnu in their original Block Constructed version of the deck, but it got cut eventually because it wasn't useful enough. Apparently, when someone is not around in France, it is common practice to say that "he was at the swimming pool," hence the resulting deck name. With the lasting decline of Dralnu du Louvre decks in Standard, perhaps we should rename the deck to "Dralnu at the swimming pool" as well then...

The format is getting a bit stale now, as it is clear what the decks to beat are. If you don't like to copy one of the top decks, then this is the perfect opportunity to go rogue! I got many emails on my article from two weeks ago where I showed a rogue deck, and I received many nice ideas. One of the cards that many people tried to break is Wildfire (a fantastic card that isn't in many decks right now), so today I have something new to show again.

The goal of this deck is to accelerate into a big fatty creature on turn three or four and then to play Wildfire to sweep the board. You'd be hard pressed to defeat a turn-four Spectral Force followed up by an unsuspended Greater Gargadon and Wildfire turn five.
Micah and Jason told me the following:

"Green has a lot of good complements to Wildfire in Harmonize and mana acceleration. Green also has Carven Caryatid, a creature that replaces itself with a card draw, staves off incoming aggro attacks, and survives Wildfire to be a nuisance to any one drop/two drop creature the opponent could muster post Wildfire. Green also has Spectral Force. There is [no] better card to plop down on the field right before a Wildfire.

The deck can beat the control decks with Detritivore in the sideboard. Dragonstorm is a bad matchup, though. After thinking of Muse Vessel, Jester's Scepter, and Chameleon Blur, the best answer for Dragonstorm has been proven to be Barbed Shocker. This sounds really silly, but it usually hits the board and nukes their hand (including but not limited to combo pieces and countermagic). Two on the field is bad times for Dragonstorm since they're most likely milling for up to 14 cards."

Thanks guys! I agree that the deck looks solidly construed and that Wildfire is still a very powerful card. The only sad thing is that it is too slow and not disruptive enough to beat the number one deck in the format, Dragonstorm. Crazy tech like Barbed Shocker might improve the matchup, but it still seems like a major problem that I don't have a simple solution for. Then again, the deck seems strong enough to compete against the rest of the field; certainly something to try out.

I also figured it would be nice to check in on the Extended format again. This is the Premier Event Top 8 metagame of the last three weeks, using the events that I got replays of.

Boros Deck Wins and Aggro Loam were the leading decks in the last three weeks, closely followed by TEPS Desire, Goblins, and GiftsTron variants. In other words, the top tier decks still consist of combo, beatdown, and control variations, so there is something for everyone. The major surprising metagame swing was in the beatdown department: Domain Zoo took a plunge, and Boros Deck Wins was a hit. I don't have a good explanation for that; I thought that Raphael Levy showed with his two Grand Prix wins that Domain Zoo is at least not inferior to Boros. But anyhow, this metagame swing won't make a big difference—at least not on how you should construct your own deck— as Boros Deck Wins and Domain Zoo are very similar in strategy.

There were two newcomer decks that caught my eye. First was the Enduring Ideal deck. It uses Invasion-block sac-lands (like Ancient Spring) and Lotus Bloom to get to seven mana quickly. Sometimes Seething Song or Pentad Prism help out as well. With four Burning Wishes, three Enduring Ideals (one in the sideboard) and some additional card drawing in the deck, you hope to find the namesake card quickly enough. When the epic spell resolves, you usually first go for Dovescape and then Solitary Confinement to ensure you won't die and that your opponent cannot disrupt you. Eventually you win with Form of the Dragon. There used to be decks like this with a Balancing Act theme interweaved around before, but I see no Balancing Acts in Enduring Ideal decks lately. I'd guess the deck is more focused now.

The other deck was Blue-Green Counterbalance Aggro. Somewhat similar to Kyle Sanchez's King in the Castle deck, it sports Birds and Elves, fast green beatdown creatures, and a Trinket Mage silver bullet disruption package. The new element is to include Counterbalance and Sensei's Divining Top as well. This is not a stunning innovation. Trinket Mage fetches the artifact that combos with Counterbalance, and that has been a driving force for many Extended decks before. It's just that I had not seen this in a blue-green deck yet, and when you start thinking of it, why wouldn't you just throw some Counterbalances in there?

I'll conclude today's article by directing you to some other spots on the Internet that might be fun to check out and/or that have some relevance to Magic Online.