Time Spiral features 301 cards, plus 121 special "timeshifted" reprint cards from Magic’s past, with randomly-inserted premium cards. All cards, including the timeshifted cards, are tournament legal. The set includes 121 commons, 80 uncommons, and 80 rares, plus the 121 timeshifted cards with their own rarity. It will be available in booster packs, theme decks, tournament packs, and Fat Packs. 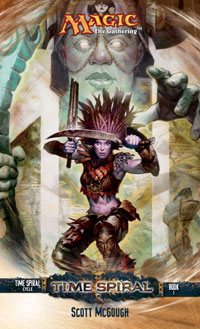 The planeswalker Teferi at last returns to his home plane only to find it devastated and barren. Time itself is fracturing, and it's up to Teferi and his companions to find a way to halt the collapse.

It won't be easy when his allies are poised to turn against him.

ominaria lies in ruins. Having survived more than a few cataclysms over the last few millennia, its shattered remains of forests and buildings punctuate a desolate landscape. But the damage inflicted on the plane at the center of the Multiverse is more than skin deep. Strange storms and shimmerings pass over the land, sometimes bringing with them flashes of Dominaria’s ancient past. It’s as though time itself has been shattered. Beings and places from across the plane’s long history blink into existence, often disappearing as quickly as they appeared.

Amidst the upheaval, Teferi senses something the others cannot: The connection between the land and its mana has been deeply damaged. Teferi realizes that in order for the land of Shiv to be phased back in, to reclaim its place on Dominaria, this damage will have to be repaired. Teferi senses the presence of another planeswalker on this desolated Dominaria: the forest advocate Freyalise. Despite her bitterness toward him as well as the natural enmity between them, Teferi knows that he must seek her help.

The meeting of the two planeswalkers is only the first small step in uncovering the nature of Dominaria’s sickness. Teferi, Jhoira, and their allies have embarked on a long journey that will take them from the heart of Skyshroud to the dark core of Urborg, and even onto the shattered shores of Tolaria. What they discover will change the Multiverse forever. 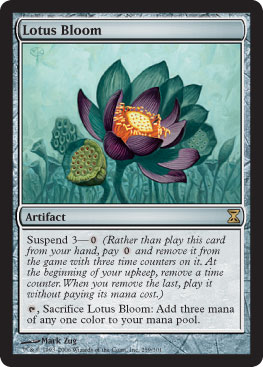