Time (Spiral) Is On My Side

I begin, I have just one warning for all you Magic players out there: your heads are about to explode. Seriously, R&D has really gone crazy on the Time Spiral block, both mechanically and creatively. I've been working with Magic creative for six years now, and during this memorable tenure, my jaw has dropped many times, but never like it has during these past few months. In the next three sets, Magic will do the unexpected: surprising old stuff will return in new forms, new things you thought couldn't be done will be done, and design rules will be broken all over the place in the wildest ways anyone could come up with. Fasten your seat belts, everyone; you're in for one heck of a ride! 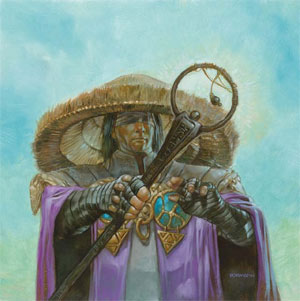 But all this is quite appropriate, given the state of Dominaria as the set opens. Yes, for the first time since the Scourge set, Magic returns to Dominaria, the plane where most storylines first germinated. We've traveled to many different planes in the past few years, but it's time to go back to the place where it all started. Time Spiral has something for everyone: new players will get a modern taste of Magic's creative history, while veterans can wax nostalgic about storylines gone by. And there are some neat mechanics and card powers too for those of you who care about that.

But first, let me refresh your memory about what happened the last time we were in Dominaria. The first major event that really shook the world was the explosive end to the Brother's War, chronicled in Antiquities. The blast of the Golgothian Sylex destroyed the forested island of Argoth, and plunged the world into an Ice Age that might've lasted forever, had it not been for the efforts of, among others, a long-lived archmage and a single planeswalker. After that came the accident on Tolaria. An experiment by the great planeswalker Urza went horribly wrong, causing an explosion that shattered the continuity of time itself. “Time streams” were created; in these, time moved at different rates than the rest of the world. Thousands of years later, the dreaded Yawgmoth overlaid his artificial plane of Rath atop Dominaria, instantly bringing his forces to his old home planet for a massive invasion. His Phyrexian army brought much destruction to the planet before their terrible master was felled by a blast from the powerful collection of artifacts known as the Legacy. Finally, a hundred years after the invasion's end, a cataclysmic burst of energy from the mysterious artifact known as the Mirari created Karona, a godlike being who was the living embodiment of all magic on Dominaria. 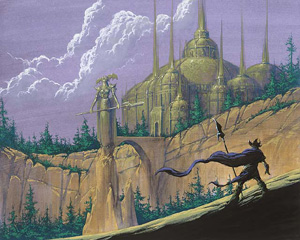 All of these events have been seen through the lens of the card game, and all are pretty serious. A world would be hard-pressed to survive even one of these globe-shaking events. But that many? Something has to give. More on that something later.

There's one more major event that I didn't mention already: the disappearance of entire continents. Faced with the Phyrexian invasion, the planeswalker Teferi decided to save his people instead of staying to fight, “phasing out” parts of Jamuraa and Shiv. Many players have wondered what happened to Teferi and his people, not to mention what happened to Dominaria after Kamahl's defeat of the false god Karona. Time Spiral answers both these questions, but those answers aren't all that pretty.

When Teferi returns to Dominaria, he finds an embattled, desolate world on the brink of ruin. It's been centuries since the events of Scourge, and although things did improve immediately after Karona's destruction, it's gone sharply downhill ever since. The connection between the land and mana has been badly damaged by the multiple cataclysms. This “mana drought” has decimated the population and desiccated most of the plants and animals. Civilizations and cities have given way to small enclaves of huddled, desperate survivors. Almost nothing thrives in this harsh landscape, where salt storms flay flesh from bone and destroy what few meager crops manage to grow. Never has daily life on Dominaria been quite this desperate.

Teferi begins to blame himself, and planeswalkers like him, for this sad turn of events, but he has little time for guilt. The fabric of space and time has also been seriously damaged. The damage first started with the Brother's War, and all the misfortunes since then, have made things worse. This instability spreads across many worlds and affects many planes, but it harms Dominaria the most. There, reality itself has shattered, creating time rifts that cause Dominaria's past to collapse into its present, haphazardly bringing people, places, objects, and monsters into being. It is the finishing stroke for a wounded and dying world, unless Teferi and his allies find a way to heal the damage before it's too late. 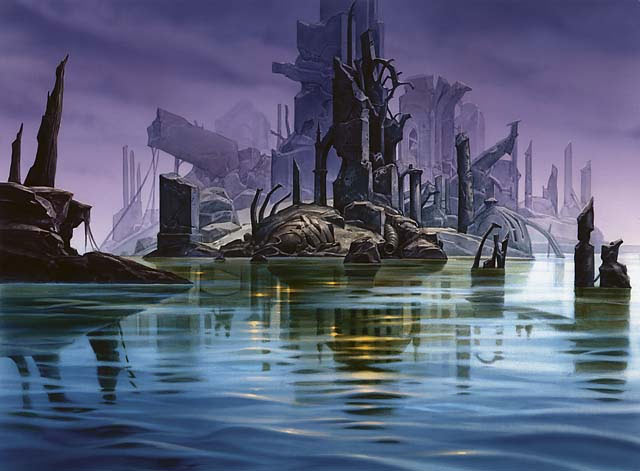 With his knowledge and power, there is still hope, but he can't do it alone. Teferi is joined by many familiar faces, such as his old friend Jhoira, and a few new allies, such Venser, a talented Urborg artificer who's managed to learn much about machines and Dominaria, despite his humble beginnings. They'll have to take very serious action if they want to set things right. Long-held creative paradigms familiar to most Magic players may have to change forever. But when the situation is this dire, extreme action needs to be taken. If not, the world that players have known and watched for so long is doomed to extinction. 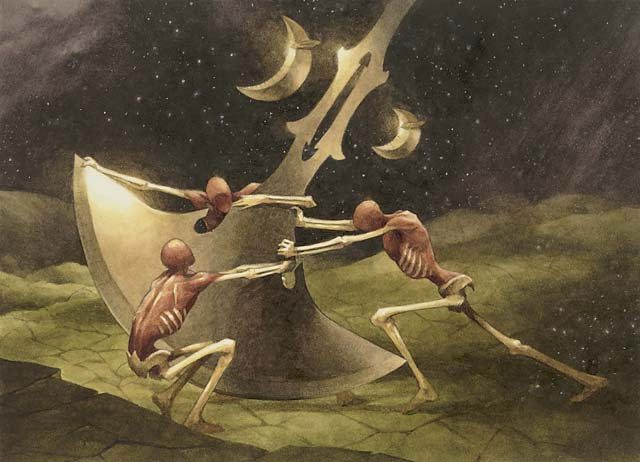 The state of Dominaria, and the events I've just described, made Time Spiral an exciting creative challenge. As you've probably guessed, this block will deal heavily with time, and this first set is a look into Dominaria's past. The time rifts have sucked up figures and things that have never before seen card form and transported them to the modern world, but that's not the only way the past will come to life. There will be other sorts of reminders as well. For example, Urborg still holds the ruins of Volrath's Stronghold and the City of Traitors. There, the il-Kor, the il-Vec, and the il-Dal still wander the shattered streets, although many have found some measure of redemption over the long centuries. But how have they changed since the last time we saw them during the Tempest block? Meanwhile, the last remnants of the Capashen family toil to uphold the ideals of the fallen Benalia. In the mountains, though the Keldon people have mostly been wiped out, their blood still lives on in Radha, a half-elf warrior who may carry Dominaria's last hope. Those of you who've played the game and kept up on the storylines these past few years will see plenty that you'll recognize in addition to new characters and locales.

On that note, it's time for the preview card! For obvious reasons, all of my preview cards in my magicthegathering.com career thus far have been legendary, and this time is no exception. There were a lot of big names, familiar names, I could've written about, but considering his role in this block, one character in particular was :

Appropriately enough, all three of the new keywords introduced in Time Spiral have something to do with time or timing. The one that needs the least explanation is displayed in Teferi's card: Flash, which is a keyword for a well-established ability in the game. Named for the Mirage card of yore, Flash simply means that you can play a spell any time you could play an instant. This ability has made superstars out of cards from Simian Grunts to Caller of the Claw, but a legend like Teferi demands a little more pizzazz. And he gets it, in spades.

Teferi was first mentioned on cards during Mirage. Even then, cards like Reality Ripple and Teferi's Imp hinted at his mastery over space and time. Then we saw him as a student during the Urza's Saga block, and bore witness to the temporally chaotic events on Tolaria that shaped his path as a wizard. Now, we see that love of time reflected in cardboard form. Teferi enables all your creatures to “beat the clock” and come out whenever you have the inclination and mana. This makes for all sorts of unpleasant surprises for opponents, like sudden blockers, or turning your creatures with “comes into play” effects (such as Nekrataal) into instants. But this card goes one step further, actually preventing your opponent from springing surprises of her own! No more pesky Giant Growths or burn spells ruining your carefully planned attack, and no more countering spells; with Teferi in play, time is definitely on your side. Be careful – he has more surprises in store for those of you who pick up the novel!

About this time in my storyline articles, I usually say things are about to get crazy. And it's always true. But this time, I really, really mean it, and not just in relation to the storyline. I predict gasps of astonishment and cries of “No way!” that can be heard from here to Tefemburu for the next three expansions. But with the shock will come great happiness, for with the insanity comes some really neat and innovative ideas. I look forward to seeing your reactions as it all unfolds over the next year, and to the material that this block will continue to inspire for years to come.

Until then, enjoy everything that the time rifts have to offer. Just don't be surprised at whatever comes out of the mists!