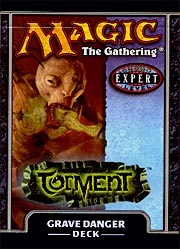 he Grave Danger deck dumps lots of cards into your graveyard. And though you'd expect an Odyssey-block graveyard deck to focus on threshold cards, this one doesn't. Instead it features powerful grave-eating monsters like Psychatog and Organ Grinder. Even if you reach threshold, you won't be there for long.

This deck really shines in a long game, but if your opponent starts applying pressure quickly, you'll need to do whatever it takes to survive. Play your creatures right away and don't be afraid to use their discard abilities - you'll make your creatures temporarily stronger and you'll fill your graveyard. With this deck, a full graveyard is a happy graveyard. Those Psychatogs and Organ Grinders will thank you for the meal. Chainer's Edict and Churning Eddy will help clear the way for your grave-eaters once you're ready to put them into action.

Throughout the game, take advantage of the deck's many graveyard-filling tricks. The turbo-powered Cephalid Vandal is great in a deck that depends on a full graveyard. False Memories opens up all sorts of possibilities, and it can be a suprise boost for your Psychatog. We wouldn't want to give away all the tricks, but here's one more: Use Cephalid Illusionist's ability on itself after blockers has been declared. It stops on opposing monster for a turn and puts three cards into your graveyard. You'll be attacking with a 12/13 Psychatog in no time.

If filling up your graveyard doesn't work out, switch to a straight beatdown strategy. Balshan Collaborator and Skywing Aven are crucial. If you can reduce the ground to a stalemate, these two fliers can punch through for a win.

To tune this deck, consider speeding it up and focusing even more on the graveyard theme. Take out some of the expensive spells, and increase the number of Cephalid Vandals and Compulsions. While you're at it, add a couple more Psychatogs. Once you commit to the graveyard theme, the next thing you'll commit will be your opponent. 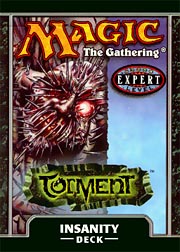 here's nothing quite like good old fashioned beatdown. The Insanity deck swarms your opponents with all kinds of beasties, and it has a few tricks to boot. Sure, thirteen of the deck's creatures cost one or two mana, but that doesn't mean that the deck has no heavy hitters. You also get some big tramplers and lots of ways to pump up your weenies when blockers appear.

Insanity differs from other beatdown decks because it makes discarding cards seem like a good idea. Centaur Veteran, Grotesque Hybrid, Krosan Archer, Putrid Imp, and Wild Mongrel are all "symbiotes" - you can discard cards to make them better for a turn. Nantuko Cultivator can get really big if you discard lands when it comes into play, and it replaces the cards you lost, too. Narcissism turns every one of your cards into a mini-Giant Growth.

You won't miss those cards you throw away. This deck softens the blow by including lots of cards with madness (Arrogant Wurm, Basking Rootwalla, and Strength of Lunacy) and flashback (Acorn Harvest and Sylvan Might). Chances are you'll be able to play the card you discarded anyway.

Spend your first few turns playing creatures like crazy. If possible, discard Basking Rootwalla to activate Putrid Imp's or Wild Mongrel's ability, then play the Rootwalla for free. In general, try to avoid paying full price for your madness cards. Instead, wait for the opportunity to help one of your creatures by discarding a card with madness, and play it at a discount.

When blockers start to hassle your army, use Muscle Burst, Sylvan Might, and Narcissism to burst through. You should be able to destroy most of your opponent's creatures in combat, so hang on to your Waste Aways until something really annoying hits the table.

If you like the Insanity deck's speed, you could take out some of the more expensive creatures, such as Grotesque Hybrid and Centaur Veteran, and replace them with cheaper ones, like Werebear. Diligent Farmhand would be a good choice, too, because it makes your Muscle Bursts stronger. You might also play some cheaper creature removal spells, such as Chainer's Edict. 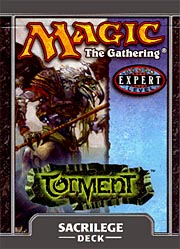 acrilege is a graveyard-based utility deck with many cards that compliment each other. For example, Buried Alive, Gravedigger and Ichorid have great synergy. Play Buried Alive to search for the creature card you need, then play Gravedigger to get that card into your hand so you can play it. If you don't draw Gravedigger, choose Ichorid and two other black creatures when you play Buried Alive. You'll get to return the Ichorid to play at least twice.

What's the best way to play this deck? It's not as complex as it might seem, because it's really just a creature deck at heart. You want to play creatures early and often. Play the Buried Alive/Gravedigger combo to search for the creatures you need right away. Then bide your time and try to maintain control of the game until of your big threats enters play: Angel of Retribution or Carrion Wurm. Then it's time to sound the death knell.

Sacrilege doesn't just reanimate creatures. You know the Torment set has more black cards than the norm. This deck uses creatures with protection from black and swampwalk to take advantage of that fact. You might also have noticed that all the other Torment theme decks contain black creatures and swamps. What a coincidence!

The Sacrilege deck has a tough time against fast decks. It has only a few removal spells, so play your Crippling Fatigue wisely. To make the deck better against beatdown decks, try adding some cheap creature removal, such as Chainer's Edict. And if you want more ways to get creatures into your graveyard early on, consider the Odyssey card Entomb. 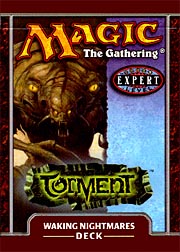 lack-red control never really feels like control. That's because while the deck deprives your opponents of their cards and lands, it also tries to deal as much damage as possible so your opponents will be out of the game before they can refresh their resources.

The Waking Nightmares deck blurs the line between control and beatdown even further. With any of its fifteen Nightmares - creatures that remove something from the game for as long as they're in play - you can eat away at your opponent's resources and beat them down with the same card.

As with any black-red control deck, it's important to get off to a quick start. Don't be afraid to mulligan if your opening hand isn't aggressive enough. In the early game, play your low cost creatures as soon as you can and start putting on the pressure.

In the midgame, your Nightmares should really torment your opponent. Faceless Butcher keeps creatures off the table, Petradon chokes off lands, and Mesmeric Fiend narrows the options in your opponent's hand. Use your red direct-damage spells to clear a path for your attackers.

If you find yourself in a drawn-out battle, break out Chainer, Dementia Master. Not only will it let you resurrect creatures from any graveyard, but it pumps up every Nightmare in play. Also, don't be afraid to aim your direct-damage spells at your opponent's life total if your ground assault has been neutralized.

One combo in Waking Nightmares is very tricky. With some help from the Odyssey set's Malevolent Awakening, your Nightmares can take things away for good.

How? When you play a Nightmare, such as Faceless Butcher, it comes into play ability goes on the stack. In response, you sacrifice the Butcher to play Malevolent Awakening's ability. Then the Butcher's leaves-play ability resolves first, but the Butcher hasn't removed a creature from the game yet. The leaves-play effect does nothing. So the comes-into-play effect removes a creature from the game that can never be brought back!