to the second week of Akroma Month! In case the 352 Akroma-based decks featured last week weren't enough, I'm here to bring you more of the same!

At least, that was the plan.

Unfortunately for the Akroma devotees in the audience, all of my notes have been destroyed. By the look of it, they were sliced to pieces by some kind of ninja-style weapon, glued back together, then turned to stone, then chopped up a second time. I'm not sure how that happened. Luckily, my readers came to my rescue.

Sky Swallower and the World of Tomorrow

There are a number of ways you can build a Sky Swallower deck. I've built a few of them already, using Sky Swallower to give away things you don't want (like Delusions of Mediocrity and Force of Nature), or to steal things you do (by way of Endless Whispers). Ben Bleiweiss added his own take on the card, by “donating” permanents with a symmetrical effect like Zur's Weirding and Night of Souls' Betrayal.

There is yet another way you can build the deck, and I alluded to it at the end of my article. It's the “play Sky Swallower and float mana” plan. First off, there's the brokenness of following Sky Swallower with either Balance, or Balancing Act, leaving you with an 8/8 flier and your opponent with a single creature populating an otherwise empty board. Another card I mentioned was Acidic Soil, which would punish your opponent for taking all of your lands away. Lower on the list of great Swallower followers (much, much lower) is the card that Andrew Lee and AJ Richardson decided to use. It's a card that even I wouldn't touch. Not with a ten-foot pole, or an eleven-foot pole, or even two ten-foot-poles lined up end-to-end.

Andrew was the first to suggest pairing Sky Swallower with Aura Barbs, but AJ sent me a nifty-looking decklist which worked “surprisingly well.” As AJ said:

To get the requisite mana, AJ filled the deck with land-enhancing enchantments like Utopia Sprawl, Fertile Ground, and Dawn's Reflection. I went a step further and included some Wild Growths. This allowed me to play a lower-than-usual land count while making the deck as enchantment-dense as possible. All of the enchantments turn into cantrips with Enchantress's Presence on the table, so AJ used a full set of that card and I included a pair of Drift of Phantasms to act as Presences five and six. The Drifts can also be used to find Aura Barbs (when you want to go for the kill), and Copy Enchantment (when you need extra “removal” or want to double up on your Presences).

Faith's Fetters and Psychic Overload are your catch-all answers to problem permanents. Fetters can either play its usual role of Pacifism/Sacred Nectar, or it can answer cards like Oblivion Stone. Psychic Overload's effect can be negated by your opponent if he or she can discard two artifacts, but unless your opponent is playing a Mirrodin-heavy decks, this will rarely be possible. If you expect to face a lot of fast creature decks, you might want to replace these cards with something like Ghostly Prison.

Just in case the Aura Barbs plan doesn't seem like it will work out, AJ added Steely Resolve to the deck to further Plan B: Suicide Sky Swallower. This might not be a great plan, but it certainly can be effective. Besides, as AJ says, “how many times do you get to set any 'choose a creature type' card to Leviathan?”

This is the kind of deck that can handle a bunch of Naturalizes (there are way too many targets for your opponents to be able to keep you down for long), but you will get destroyed by people maindecking Primeval Light, Akroma's Vengeance, or Aura Shards.

By now, most of you have probably seen the Kami of False Hope + Proclamation of Rebirth combo. Once you hit six mana, you can use the Kami to prevent all combat damage on your opponent's turn and then use the Proclamation's Forecast ability to return it to play during your upkeep, effectively shutting down your opponent's combat phase entirely. I used to play with Spore Frog and Verdant Succession (along with Battlefield Scrounger to put the sacrificed Frogs back into the library), so this combo held great appeal for me. As I've said before, two-card combos are fun, but they need decks to fit into. The very persistent Mason Gordon (a fellow Canadian) sent me a fun-looking list that doubled up on ways to “Fog” every turn by including Shirei, Shizo's Caretaker. Since so many of the one-mana creatures you will want to return with Proclamation of Rebirth also have one power, Shirei fits right in. There are a lot of options for this deck, including other Rusalkas, Festering Goblin, Order of the Stars, and others. Mason decided to use creatures that could sacrifice themselves or otherwise put themselves in the graveyard. Creatures like Plagued Rusalka and Bile Urchin. Both the Black and White Ghost-Lit creatures have one power and cost one mana, so you can do fun things like Channel them for their one-shot effects, then return them to play with Proclamation of Rebirth and start using them every turn.

The deck is designed to stall as long as possible with life-gain and repeated Foggings (somehow, “Holy Day-ings” just doesn't sound as good, the Colour Pie be darned.) until you can make Mortivore huge or get the Bile Urchin + Shirei engine going. Bathe in Light is there to protect the Legend or allow you to go in for the alpha-strike by giving Mortivore protection from the relevant colour.

I made some minor changes to Mason's deck, upping the Soul Warden and Bile Urchin count to four each, and trimming one each of the Ghost-Lit creatures, one Shirei, and a pair of Bathe in Lights. The only major change I made was to add a set of Stinkweed Imps. They can't be reanimated with Proclamation of Rebirth, but their Dredge ability can be used to help fill up the graveyard with Proclamation targets. Mortivore is just as happy to see a full graveyard, and with the ability to put creatures in your graveyard almost at will, you should have one. Since the Imps have a power of one, they work well with Shirei. More importantly, they provide another answer to the ubiquitous Silhana Ledgewalker + Moldervine Cloak combo that crushed me a few games in a row. Here's a modified version of Mason's deck:

The possibility of Earthquake returning to the Core Set after a two-set absence had me thinking. What if there was a card like Earthquake that could deal twenty damage to each creature in play and twenty to your opponent, leaving you untouched? What if I told you that this Earthquake would only cost five measly mana? And it's in Standard? Impossible, you say? I thought so, too. That is, until Sergei L. Sagataev and iammars let me in on a little two-card secret: Kindle the Carnage and Ragged Veins.

Kindle the Carnage's damage capabilities are limited only by the cumulative converted-mana cost of the cards in your hand. By filling your deck with high-priced spells like the Myojin, and ways to find them, you can very easily get twenty-mana worth of cards in your hand. For each damage dealt to the creature it's enchanting, Ragged Veins causes that creature's controller to lose one life. Twenty damage to the creature will result in the loss of twenty life for opponent. In order to ensure that you can assemble the combo, while keeping enough cards in hand to make the Vein Kindling lethal, iammars included full sets of Howling Mine, Diabolic Tutor, Infernal Tutor, and Dimir Machinations (which can be Transmuted for Kindle the Carnage, or hard-cast to set up your next draws). Infernal Tutor is especially good in the deck, allowing you to buff up your hand with extra high-mana spells, backup copies of the combo pieces, or even extra mana sources.

Since both pieces of the combo are so cheap, with the right draw you can kill your opponent as early as turn 3. That's Ragged Veins on turn 2, and Kindle the Carnage the following turn. Sometimes it can be tricky to get Ragged Veins to stick. Against decks with creatures that can sacrifice themselves and others (creatures like Plagued Rusalka, Thoughtpicker Witch, and Nantuko Husk), you might have to cast a defensive Kindle the Carnage before you go for the Veins. Against decks that have no creatures at all, you will have to find one of your Forbidden Orchards and give them a creature that way.

If you want to experience the straight-up weirdness of casting a Diabolic Tutor for Ragged frickin' Veins, then I strongly recommend trying out this deck.

1 Boseiju, Who Shelters All
60 Cards

Both Sergei and iammars had Warp World in the deck for additional wackiness, but I ended up cutting them for a set of Rakdos Signets. With so many Sorceries in the deck, you'd rarely come out ahead by casting Warp World, while the Signets (and the Rakdos Carnariums I also added) make casting some of your high-priced spells a realistic proposition. 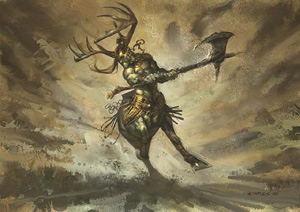 The recent addition of Standard Tribal Wars to the list of MTGO formats has everyone on the planet super-excited. I know how hyped-up magicthegathering.com alum Jay Moldenhauer-Salazar is about the new format and his enthusiasm is infectious. When he's not windmill-slamming Akromas like a Dutch wrestler, Jay is gathering up all the Lizards, Skeletons, and Beasts he can find and making fun Tribal Wars decks out of them. I'm also going to hop on this particular bandwagon and for the next several weeks, I'm going to include a decklist which can be used for Standard Tribal Wars. Some tribes are better than others, naturally, so I can't claim that these decks will be able to compete with some of the powerhouse Tribes like Spirits, which boast ridiculous bombs like Ghost Council of Orzhova and tournament-caliber decks that are easily adapted to Tribal Wars.

Instead, I'm going to start with one of the lesser Tribes, which just so happens to have another tournament staple among its members: Burning-Tree Shaman. Shamans? Nope. I'm talking about Centaurs. With just five members, the Centaur tribe is a small but close-knit group. Most of these half-men, half-horses are pretty straightforward beatdown specialists. The odd half-man out is Dowsing Shaman, who becomes a real killing machine when you have a deck full of enchantment removal. That is, removal in the form of Enchantments (Seal of Fire, Riot Spikes, and Galvanic Arc). The last two can serve double-duty as Centaur-boosters (obviously, don't put Riot Spikes on Centaur Safeguard), while Seal of Fire is useful to enable the Bloodthirst of Ghor-Clan Savage.

One card that I didn't test, but which seems like it would be good in the deck, is O-Naginata, since all five Centaurs will have a power of three most of the time.

Until next time, have fun tribally!