s, Johnnies and those of indeterminate orientation! Welcome to Tribal Week! For those of you keeping track of such things, this is technically the second Tribal Week we've had here at magicthegathering.com. The first one occurred nearly five years ago, during Onslaught Block. I had been calling this week Tribal Week 2: The Exhausting of the Puns, but I was rescued by the Pun Gods at the eleventh hour and given the title you see at the top of the page. Its last-minute arrival was a huge relief to this frustrated wordsmith, even though it makes no sense whatsoever.

It's no secret that I'm a big fan of tribal decks. I've been building decks for Standard Tribal Wars on a regular basis for a year and a half, and almost every deck I've built in last five weeks has had some tribal element. I have a feeling that I'll be building some more tribal decks after this week is through. It's just a hunch. 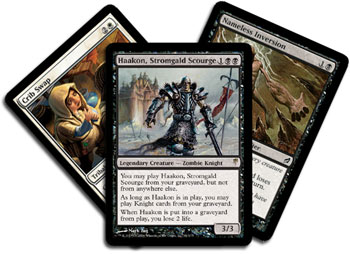 Who would have thought that one of the biggest winners in the Lorwyn tribal sweepstakes would be a card from Coldsnap? As a reader named Kevin wrote: "Did you know Crib Swap, Nameless Inversion, and all the other changelings are also Knights? And you remember who cares about Knights: Haakon, Stromgald Scourge!" Wow, that is quite ridiculous. The changeling cards have all creature types, one of which is "Knight." Note that Haakon allows you to play Knight cards from your graveyard and not just Knight creature cards. This is what allows your changelings (creatures and Tribal spells) to be played from graveyard when you control Haakon, turning him into a cross between a Trained Armodon and Yawgmoth's Will. This combo was also brought to my attention by Jesse M., Efrén R., Landman, and Mikael J.

Not content with pointing out the combo, Mikael went a step further and sent me a deck that exploited these interactions. It was black and white for Nameless Inversion and Crib Swap, but it also had blue for Wings of Velis Vel. While I'm definitely excited by the prospect of machine-gunning my opponent's creatures with unending Nameless Inversion recursion, I'd be just as jazzed to turn my team of weenies into a fleet of 4/4 flying changelings and swing for the win. Among the weenies Mikael was using were a pair of Haakon-enablers, Looter il-Kor and Stronghold Rats, to which I added Oona's Prowler, Stromgald Crusader, and a single Shapesharer (which I keep reading as Sheepshearer for some reason). As a changeling, Shapesharer is a Knight. Its ability to copy other creatures allows you to ride the coattails of your opponent's best guy (if it's not legendary) or kill it (if it is).

I made some other modifications to Mikael's deck, mostly to reduce the amount of white in the deck to make the mana easier. Right now, white's only in there for the Crib Swaps and a pair of late-game "Knights" (Mirror Entity and Changeling Hero). Knight of Meadowgrain is obviously fantastic, but the double white is probably unrealistic in a deck that wants to play Haakon and/or Looter il-Kor as soon as possible.

The deck is pretty straightforward: evasive creatures, some "pump" spells, and a bottomless well of removal.

A Matter of Life and Deathrender

As Devin Low mentioned in his column last Friday, Goblins sure love to die. They're eager to give up their lives for a point of damage or two, or to have their faces vaulted, and, frankly, we're eager to have them do it. Having moved largely into black, modern day Goblins have a penchant for necromancy and won't stay dead for very long.

By sheer coincidence, one of the bomb-iest pieces of equipment ever printed in Lorwyn—Deathrender—combines wonderfully with all of these zone-changing Gobbos. This is a card that has got a lot of people talking, and by talking, I mean emailing me combos. The same Kevin as before wrote: "I will assume you've already seen the combo of Deathrender + Mogg Fanatic + Enduring Renewal = Infinite Damage."

Purveyor of futuristic cutlery SporkMaster5000 wrote in to say of Deathrender: "A creature goes to the graveyard and another comes into play? That reeks of an engine." I'm smelling the same thing. The engine consists of Deathrender, a sacrifice outlet (Altar of Dementia, Ashnod's Altar, Phyrexian Altar, but not Altar of Shadows or Baku Altar, for example), and some way to ensure an endless stream of creatures. Sporkmaster5K suggested any of the following: Endless Cockroaches, Shivan Phoenix, Weatherseed Treefolk, Zodiac Dragon, Firestorm Phoenix, Ringskipper (if you have something really expensive on top of your library), two Gravediggers (one equipped with Deathrender and one in your hand), or two Myr Retrievers (one equipped and one in your graveyard). In every case, you will end up with a creature in your hand whenever you sacrifice the dude with the Deathrender.

Donald James picks up where SporkMaster5000 left off. He writes: "I'd just like to say that Deathrender is very cool and makes Goblins go infinite with Marsh Flitter, Deathrender and two Warren Pilferers (at least one in hand)." Now all you need is a way to, uh, actually win the game. Since the combo he outlined is jam-packed with Goblins, Donald suggested Boggart Shenanigans as the kill card. It acts as a sort of Disciple of the Facevault, pinging your opponent for one each time your Pilferers hit the bin. (For the record, I love the name Warren Pilferers, although I can't decide whether it's more befitting of a Goblin, a shady accountant, or an NFL linebacker.)

Putting it all together in a deck:

The sacrifice outlets consist of Facevaulter, Marsh Flitter, Siege-Gang Commander, and Greater Gargadon. They all have little advantages. Marsh Flitter can sacrifice for free all day long, but the effect is redundant after the first time. You will need Boggart Shenanigans (or, possibly, Knucklebone Witch) to turn the engine into a win. Facevaulter and Siege-Gang Commander require mana for the sacrifice, but they don't necessarily require help to win you the game. Greater Gargadon only enables a limited number of sacrifices, but has the advantage of being a worthwhile fatty to cheat into play with Deathrender.

Mogg Fanatic, Mogg War Marshal, Boggart Harbinger, and Wort, Boggart Auntie are all great "glue" guys. Bogardan Hellkite, meanwhile, is another powerful monster to put into play when your Deathrendered creature bites it.

The Elementals of Style

It's a pretty straightforward process, really. Once you figure out how to get those pesky Birds out of there, the difficulty lies in choosing the right mix of Elementals. Luckily, I was spared this task by a pair of industrious Elementalists who happen to read this column. The Elemental apple of their Johnny eyes was Ceaseless Searblades, a creature that should probably go into business with Shapesharer selling sea shells by the sea shore.

In the forums for my article last week, eaterofgnomes shared a pair of nifty Ceaseless Searblades combos. The first used Mirror Entity (a sneaky Elemental) and some stack trickiness to make your Searblades arbitrarily powerful. You have to activate Mirror Entity paying 0, let Ceaseless Searblades' triggered ability resolve, and then activate the Mirror Entity, again paying 0. You end up with a very powerful Elemental and a series of Mirror Entity activations itching to turn all of your guys into 0/0s. You don't want this to happen, of course, but you can't go into your combat step with all of this junk on the stack, either. What you have to do is dodge the need for the combat step altogether by using Brion Stoutarm to "fling" your arbitrarily powerful Elemental.

The other combo was Ceaseless Searblades + Outrider en-Kor + some way to turn Outrider en-Kor into an Elemental. Eaterofgnomes suggested Blades of Velis Vel or Shields of Velis Vel. McDugan and Robby B. (by email) brought up the fact that Runed Stalactite could also fill this role. Robby also sent along a deck that employed all of these combos, as well as a few others.

The deck is a tribal hybrid: Elementals and Rebels (with a tiny Rigger splash). The Elementals are comprised of the usual suspects—Flamekin Harbinger, Soulbright Flamekin (Ceaseless Searblades is woefully under-trampled), and Nova Chaser—as well as a few unusual ones—Flamekin Brawler, Changeling Berserker, Mirror Entity. The Brawlers go well with Soulbright Flamekin and give Ceaseless Searblades a sort of firebreathing-by-proxy. The Rebel contingent is made up of Outrider en-Kor, Amrou Scout (which fetches the Outrider, as well as Mirror Entity, other copies of itself, or Defiant Vanguard). The Vanguard fetches those cards as well as the Changeling Berserker, whose champion ability, Robby notes, recalls the utility of Whitemane Lion when you can search it out as an instant with a Rebel searcher.

Runed Stalactite is deceptively useful common that I predict will be a workhorse in weird decks for a long, long time (in the manner of Freed from the Real). Its main role in this deck is to turn your Outrider en-Kor into an Elemental, but it can also be used to turn Brion Stoutarm into a Rigger so he'll have haste if you also control Steamflogger Boss. Nova Chaser also makes an excellent Rigger, fighting alongside the Boss. The 10/2 is also a fine choice of fling-ee for Mr. Stoutarm. This is an especially good plan if you can champion a Harbinger. That way, when you fling your Nova Chaser, you'll get your Harbinger back and be able to go find another Nova Chaser. That's a cool 20 damage right there. Here's a modified version of the deck Robby sent me:

Until next time, enjoy this tribal counsel.

Missed the Prerelease, or just hungry for more? Check out Lorwyn Release Events October 12-14 to play with Lorwyn cards as soon as they go on sale.