The Truth About English Nationals... 2005 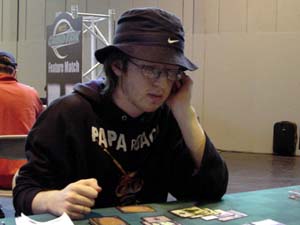 Richard Moore, at GP Birmingham '04 Nationals actually took place the week before US Nationals -- the first weekend of the month -- but there has been precious little coverage of that event. The Top 8 decks, as listed by TheGamesClub.org:

4 Ninja of the Deep Hours 4 Frogmite

1 Charge Across the Araba 4 Raise the Alarm

1 Charge Across the Araba
50 Cards

4 Leonin Skyhunter 1 Charge Across the Araba

4 Plow Under 3 Beacon of Creation

Conventional wisdom -- at least given the first couple of National Championships, and certainly results from US Regionals -- was that Tooth and Nail was the unconditional best deck in Standard. In Italy, we saw Rats make an unexpected run, and Blue began its charge back to the top of the metagame at French Nationals... but Tooth and Nail nevertheless won both tournaments. But despite being a popular choice, there was only one Tooth and Nail deck in the Top 8. It was outnumbered by White Weenie two-to-one!

With only one Tooth and Nail deck in the Top 8, English Nationals had room for all kinds of interesting decks. Dan Paskins was last seen in the Top 8 of English Nationals in 1999, when he piloted the original Red Deck Wins to a second place finish, losing to eventual Champion Mark Wraith playing -- you guessed it -- Red Deck Wins himself. It shouldn't be surprising to see Dan once again in the thick of it in his home country... or seeing him with small Red creatures and burn spells. Dan's deck is very aggressive... in lieu of the many land destruction spells played by some earlier versions of Red beatdown in this format, Paskins goes for additional damage in the form of main-deck Zo-Zu the Punisher, Genju of the Spires, and the now-ubiquitous Sword of Fire and Ice. Paskins borrows Culling Scales from the Kuroda-style Red Deck, a superb weapon against decks like White Weenie, but adds Shatter for opponents like UrzaTron Blue. With Shatter, Paskins's deck can profitably break Culling Scales against a deck with Sensei's Divining Top. Typically Culling Scales is used in conjunction with the Top, as Champions of Kamigawa's favorite artifact can help keep Culling Scales around after it has finished decimating the opponent's creatures. However, when the opponent has Sensei's Divining Top in his deck, it can be difficult to take down cards like Circle of Protection: Red that really bother the Red Deck. Now when Culling Scales targets Sensei's Divining Top and the opponent inevitably taps the one drop artifact to "save it" and draw a card... Dan can respond with Shatter, taking down the slippery manipulator.

An aggressive Red Deck is essentially a foregone conclusion for any Top 8 in the current Standard -- except US Nationals, that is -- but what about Neil Rigby's deck? When was the last time we saw a real, live, U/W Control deck? With his main-deck Worship + Pristine Angel combination, Rigby echoes one of the defining elements of White Weenie... But the even stronger White Weenie element may be Damping Matrix.

Damping Matrix is good in White Weenie because it has little interaction with the White Deck itself... but helps the deck to ruin the days of every player commanding Arc-Slogger, Kiki-Jiki, Mindslaver, and Umezawa's Jitte in the room. It has been said that White Weenie is the natural deck to use the Damping Matrix because, although the card ruins every other deck in the field, White Weenie doesn't even notice it in play. Well, the Matrix is just as kind to Rigby's deck. Literally the only interaction in his list is with Talisman of Progress, and... Nope, never mind; Damping Matrix doesn't foil mana abilities.

In any case this version of U/W control is also interesting because it has no Wrath of God or Wrath of God proxy. That card seems an automatic inclusion in U/W control decks over the years... but I guess its interaction is not great with a low creature count when creatures with no recursion are needed to win the game; in any case, the Wrath role is filled between Blinding Angel and the aforementioned Matrix.

As for the English National Team itself... this team was highly influential on US Nationals, especially via its first and third place decks. Sam Gomersall helped to cement UrzaTron Blue in the metagame with his finish, and last week we spent a bit of time talking about how effective the deck is in the field. It is interesting to see how the deck evolved from "very good" to "best" over the course of one week... To my mind, the addition of Solemn Simulacrum is the most important change, with the more powerful -- but certainly more ponderous -- board control card Oblivion Stone relegated to the long box; Oblivion Stone is considerably worse in a deck that relies on Chrome Mox and Talisman of Dominance for mana.

Still fundamentally similar to the decks that excelled at US Nationals, the other main difference is Steel Wall rather than Sun Droplet in Sam's sideboard. Sun Droplet, being the card that defined the DeRosa v. Patnik matchup one week later, would have been an appropriate choice for English Nationals. Basically Steel Wall is the better card to stop an aggressive Red Deck's best draw (opening turn Slith Firewalker on the play), where Sun Droplet is often too slow. Conversely, Steel Wall is useless against Lantern Kami, Suntail Hawk, and Leonin Skyhunter -- the core offense of the modern White Weenie deck -- whereas Sun Droplet is very good there. Two of them are backbreaking.

Lacking Sun Droplets, Sam lost to eventual Champion Richard Moore's White Weenie. Moore's deck is not surprisingly very similar to Mike Patnik's deck from US Nationals (the other way around, really). The main difference is that Moore has Savannah Lions main and Worship in the side where Michael has Worship in the main and Savannah Lions nowhere to be found. Interestingly, Savannah Lions might be very helpful in the current metagame to foil UrzaTron Blue. The match-up is generally considered to be in White Weenie's favor due to the combination of quick beatdown and Damping Matrix. To beat Sun Droplet -- and conveniently intersecting the paucity of Steel Walls -- Savannah Lions can emphasize the quick beatdown aspect more efficiently than Suntail Hawk or its Kamigawa Spirt analogue. A lone Savannah Lions can match points with a lone Sun Droplet and push White Weenie to overload damage more quickly than the one power one-drops.

I am glad to see Erayo Ninja Affinity as the third member of the English National Team. For those of you who haven't seen the synergies, Mark Knight's deck seeks to set up a turn of four cheap spells in order to set up a flipped Erayo's Essence. While having your first spell per turn countered isn't insurmountable -- certainly not in this day of Boseiju, Who Shelters All or multiple threat casts -- it does create an undeniable advantage... especially given the offense that the Ninja Affinity deck can generate. Knight's deck has a deceptively strong attack suite, borrowing many of the stalwarts of the classic -- and deservedly defunct -- Ravager Affinity deck, and updating it with Umezawa's Jitte. Ninja of the Deep Hours is of course a great combination with Ornithopter or Arcbound Worker, both of which can be attacking on the second turn.

The one card that is really unique is Genesis Chamber. Favored by one Osyp "Peppermint Von Courderouy" Lebedowicz about a year ago as a foil to mass removal in his Affinity deck, Genesis Chamber's symmetry is easily broken. Look at the various decks in the metagame... Which is going to run with the threat deployment speed of the Eryao Affinity deck? Is it the deck with creatures so clunky they can't be cast? What about the deck that only has six men? Or the one with only four? Sure, there are decks like White Weenie that can match Erayo Affinity man for man, but hey, that's why we have sideboards.

Now I know that you were probably hoping to know what would be good in Standard with the loss of Bribery and Plow Under in favor of Ninth Edition... But I haven't got the results yet, either. I'll leave you with this, though. Between the three decks that made the English National Team, two of which are base blue, there are just a total of three Hibernations that are not legal in the new Standard. While that doesn't say anything about decks with the returning Wildfire, or Llanowar Elves, or especially Hypnotic Specter, it does imply that some of the decks that have been successful in the past can make the transition intact.

Here's to hoping your opponent never has the Magma Jet for your Erayo's Essence flip on the stack... or your second turn Jushi Apprentice... or your Hound of Konda, I suppose.