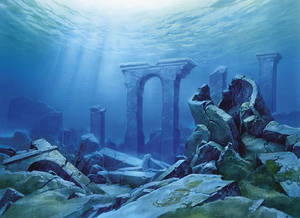 has been three long years since we last did sorcerous battle in Magic's home world, Dominaria. The Onslaught block was our last visit home. Now, with Time Spiral, we not only go home to visit Mother Dominaria, but we also have reunions planned with all sorts of friends from three to thirteen years ago. When it was decided that Time Spiral would be a nostalgic set, everyone's first feeling was one of homecoming, of the warm welcome of home cooking, family, and friends. Even Uncle Istvan would be there. But that warmth ended up being more like a relentless dry heat, and the stuff you smell cooking is your own exposed skin. Friends and family are battered, scattered, and tattered—if they're lucky enough to have survived! What sort of homecoming is this? How am I supposed to feel warm and fuzzy when all the nostalgia is wrapped in protective rags and shielding itself from the salt winds?

This was a question swirling around the Wizards office from the moment that the style guide was finished and people could see the world in which their old friends would be living. I think the somber tone of the set bummed some folks out. It was not the party that many had hoped for.

There was a time when I felt the same way. But now, in hindsight, I think it was absolutely the right move. For Magic Creative to mean anything, it has to stay true to its storylines and maintain its integrity. While Time Spiral is absolutely a homecoming party for card design, Creative had to stick to its guns and deliver the Dominarian story as it actually is – not how our foofy emotions wanted it to be. Brady Dommermuth and Jeremy Cranford each took a lot of heat for depicting post-apocalyptic Dominaria so…er…well.

The Creative team was given a set in which very little new material was needed. In essence, we did not have to “create” much of anything. We had to do a massive amount of research on old continuity and storylines to make sure we were not contradicting anything or stepping on any toes. We're all pretty sure that there are some sore toes in the set. With 13 years of history and thousands and thousands of pages of historical text, we were bound to miss a thing or two somewhere. Anyway, without much new stuff upon which to apply our creative energies, we instead chose to sink our teeth into depicting the shattered state of Dominaria as well as we could. As I said before, some folks might think it has been done too well.

Just recently, I had a thought that made me even more sure that it was the right decision to show Dominaria as a bleak wasteland rather than a Tolarian Academy Class Reunion. This thought can be summed up just by listing the names of some of the Magic sets that we looked to when seeking out nostalgia:

These names do not exactly evoke images of Mom and the old leather La-Z-Boy. That's some pretty strong stuff right there. Sure, I left out lightweights like Visions and Homelands – but the weight of Magic's Dominarian past has absolutely been war-torn and bleak. Given that, we'd have to make it harsh in order to hit the nostalgia on the head. In order to evoke warm and fuzzy feelings, we'd have to make it cold and prickly. Whether that works for you or not largely depends on how much stock you put in Magic flavor. If you care about the multiverse's shattered time/space fabric, then you'll appreciate it. If it matters to you that Urza and Mishra battled each other and blew up the world, you'll be able to feel the fuzziness. If “Apocalypse” was not just the name of the set but also the ginormous catastrophe that happened in the story, then you'll find the bleak and blasted state of Dominaria as warm and inviting as sitting down in the old leather La-Z-Boy, sipping a bowl of hot soup from your favorite Evel Knievel bowl, and watching the episode of CHiPs where Ponch teaches the local kids karate.

Let's take a look at how the Wasteland Dominaria theme plays out on Time Spiral cards. It can be seen in card names, flavor text, and art. The theme spills over into the Time Spiral novel as well, but we're going to stick to the cardboard for today.

Let's have a quick run-down of card names that help illustrate the present sad state of the plane. Card names are not the greatest place to find the flavor of post-apocalyptic Dominaria. This is the case because they are the greatest place to find the nostalgia of Dominaria of the past. Once we nailed nostalgic names wherever we could, we did our best to dip the rest into the post-apocalyptic flavor pot.

You don't have to dig too deep into the art to see the effects of a toxic, parched landscape. Just for fun, and to set the mood, let's take a leisurely stroll across the five land types. 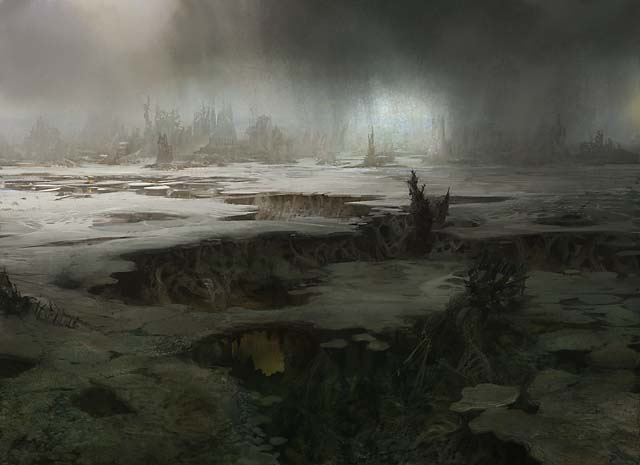 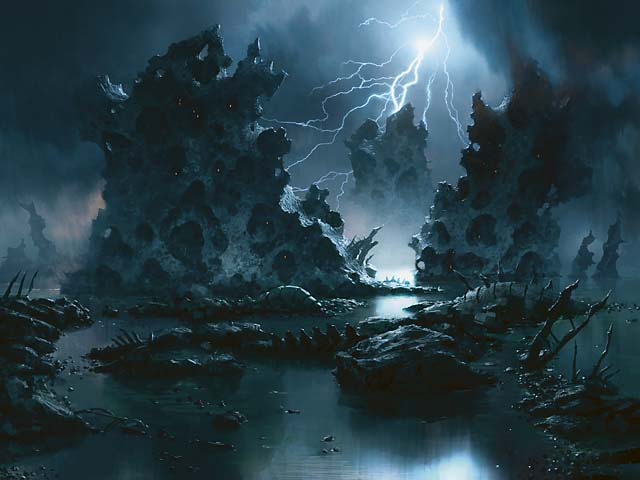 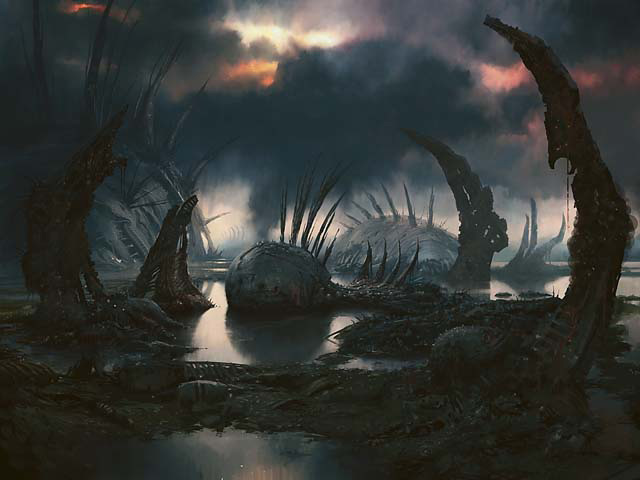 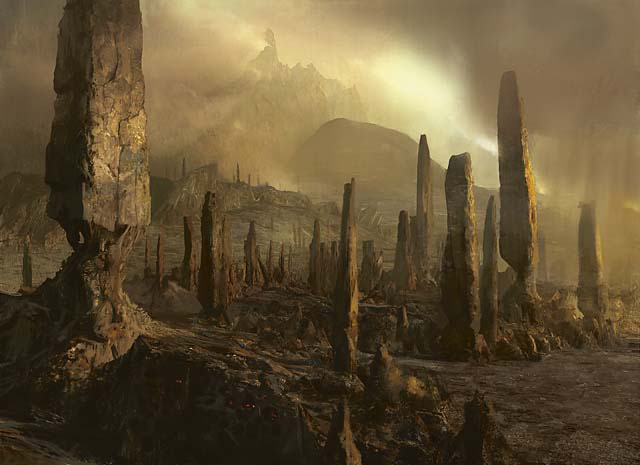 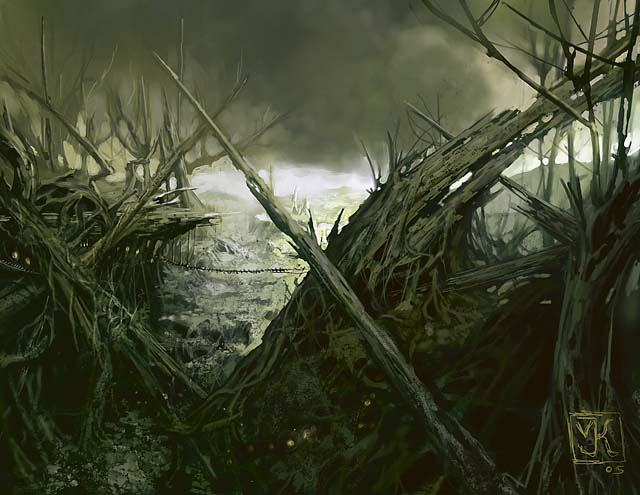 Wow, that was definitely not leisurely. We needed to employ spellcraft just to make the air breathable, and protective goggles to shield our delicate eyes from its acidity. You know, Dominaria has seen some pretty dark days, but I think these may be her darkest.

The one image that really hits home how bad things really are is that of the forest. Where's the green? Well, that happens to be a big theme in Time Spiral. This is why there are Greenseekers – druids whose sole purpose is to comb the plane for any remaining vestiges of verdure. The greenest they end up finding, though, is a whole lot of fungus. Odd fungus. Toxic fungus – the sort that can live through even the most unnatural conditions. There is a glimmer of hope, though, and it lies in Skyshroud. This small protected woodland is kept alive and (barely) green by the planeswalker Freyalise. You can see this theme on cards in the fact that only Yavimaya Dryad (wow, do I wish we could say zero cards), only one card in the set has a leaf in the art. Rebbeca Guay just couldn't help herself. Anyway, let's have a look at some Green card art to see how the color that normally gives us bourgeoning greenery and explosions of emerald growth instead gives us the world as a husk, hollowed out by disasters both natural and supernatural. 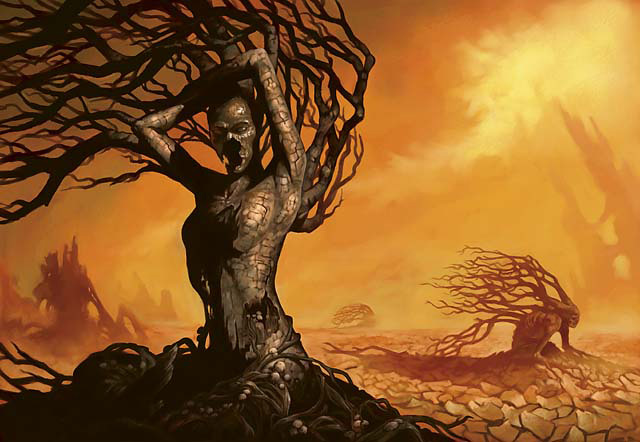 This is an awesome depiction of the present state of Green: bent, leafless, and withered, buckling under the punishing sun. 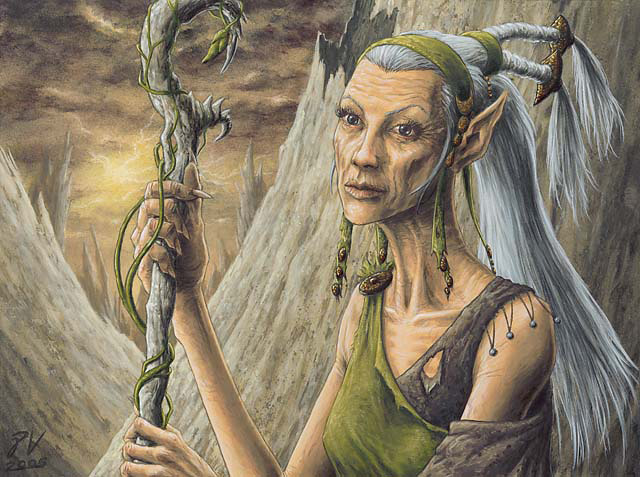 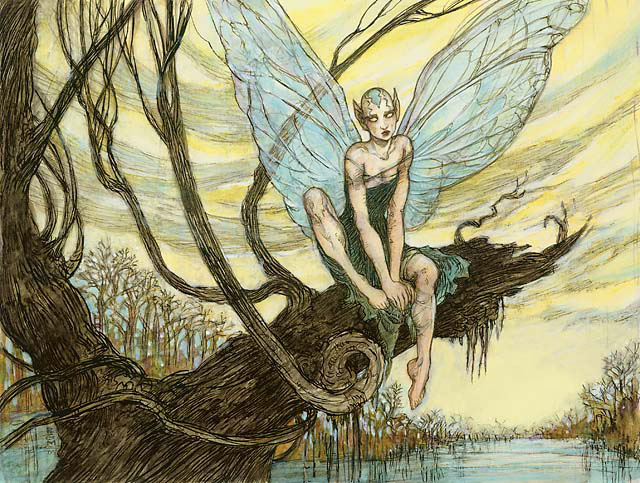 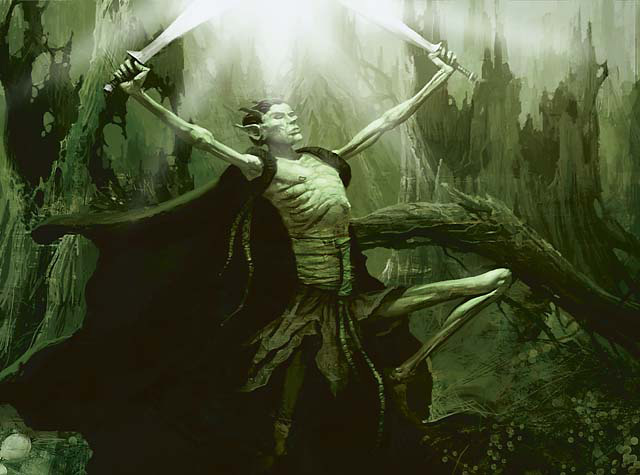 Thrill of the Hunt art by Stephen Tappin

If this is how the hunters look, imagine what the weaklings look like. 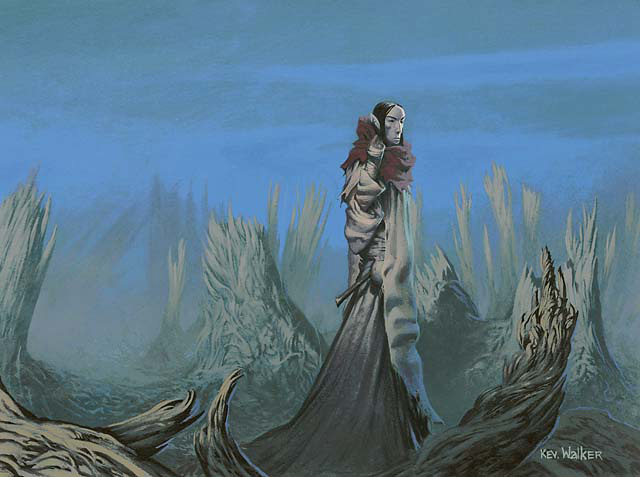 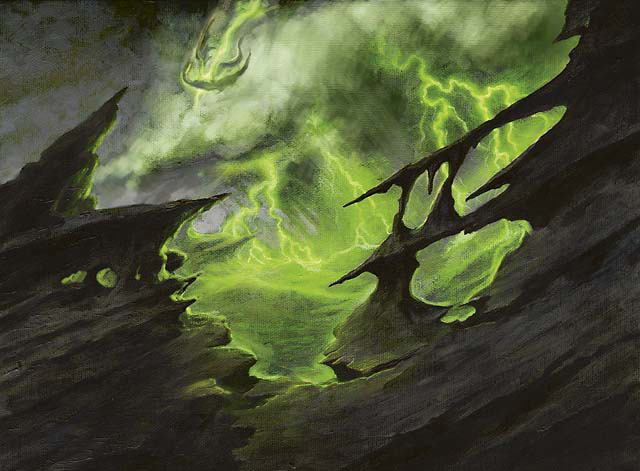 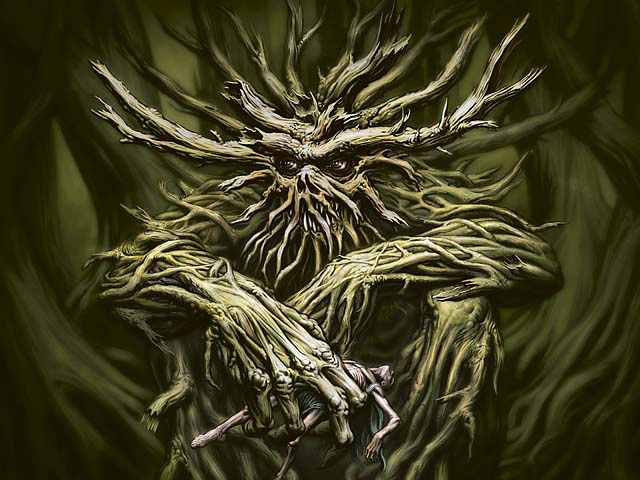 This sort of feel is not limited to Green cards, it's just that the images are so much more potent in contrast to how Green cards usually look. You can see similar desolation on Icatian Crier, Think Twice, and Cyclopean Giant.

Cyclopean Giant gives us a good segue into flavor text, another place where we can see first-hand how wretched and unforgiving the land has become. Starting with the giant, I'll list the cards, with their flavor text, that support the theme of Wasteland Dominaria.

A tomb-eye may remain shut for centuries. It opens when it sees a world as twisted and hollow as the wretch beneath its lid.

Just a small touch of magic can harness the debilitating power of Urborg's poisonous winds.

They traverse the mana-starved wastes in search of richer lands.

Good luck with that.

This soil knows well the taste of the dead. Give it the hunger for a living meal, and it can become a deadly ally.” —Ezrith, druid of the Dark Hours

Time rifts bring tunneling beasts of old into the hard, dry earth of the present. Most die there, trapped, but the mightiest burst through the surface.

Centuries of temporal strife had stripped Dominaria of its natural defenses, but nature fought back with armies constructed of little more than grime and sunlight.

“The surface of the land is blanched with salt, but the soil beneath is reddened with death—a fertile ground for necromancy.” —Lim-Dûl the Necromancer

The Keldons used the toxic vents in the cracked earth to bolster their home's defenses.

“We have a proud history of self-sacrifice. But it is easy, in these bleak times, to find one among us who is eager to die for any cause.” —Tavalus, acolyte of Korlis

“Each place we see is as ruined and lifeless as the last. So here we stay, because this ruin is ours.”

The parched earth still shielded those few souls with the heart to call it home.

I ended with the last two because they punctuate the fact that, to some, even this bleak landscape can feel like home. To the Raptors and the Dryads, Dominaria is warm and homey no matter what her condition is.