Wallpaper of the Week: Alluring Siren

he Magic 2010 Prerelease is just around the corner! Unless you're reading this on the weekend, in which case it's happening right now! This doesn't really have much to do with this cool wallpaper, but we just thought we'd mention it. Anyway, here's Alluring Siren by Chippy. Enjoy!

And be sure to scroll down for the final installment of Core Set Survivor! 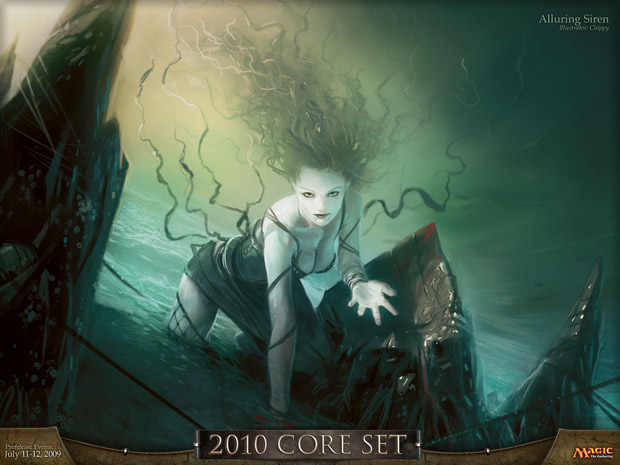 There are exactly sixteen cards that have been in every core set from Alpha to Tenth Edition. When Magic 2010 comes out, only eight cards will have been in every core set. Over the weeks before the Magic 2010 prerelease, we've been counting them down in this special Arcana sub-feature, giving you an "IN" or "OUT" on one card a day. And it all comes down to this. Two cards remain. Rod of Ruin and Scathe Zombies. One will be in, and one will be out.

Reveal the fate of the final two!

Reveal the fate of the final two. Rod of Ruin is IN! And Scathe Zombies is OUT of Magic 2010!

Thanks for playing Core Set Survivor!