Wallpaper of the Week: Knight Exemplar 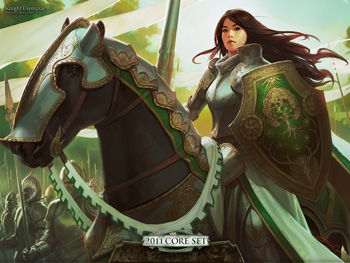 See past Wallpapers of the Week

WHITE is the color of sharing. One word in your list makes a new common noun if you replace its second letter with the second letter of the one above it. Name that noun.

Left Side: PRAYERS ("PLAYERS" from line 15, combined with the "R" in "TRANSFORMATIVE" from line 14)

BLUE is the color of knowledge. You have two words whose letters score 1 point each in Scrabble. Take the word between them and scramble it into a word ending in E. Name that word.

Left Side: LEVERAGE ("GAVELEER" from line 8)

Right Side: CONSTRUE ("COUNTERS" from line 20)

RED is the color of destruction. The first letters of all eight prime-numbered words can be rearranged to make what explosives enthusiasts love. Name the rearranged word.

GREEN is the color of life. If you read several consecutive even-numbered letters in one column, you'll find a plural noun for some Magic creatures. Name those creatures.

BLACK is the color of darkness. Reading diagonally upward starting with one word's first letter is a substance that is often black. Name that substance.

Left Side: COFFEE (starting with the first letter of line 21)

Right Side: TAR (starting with the first letter of line 10)