War of the Spark: Forsaken 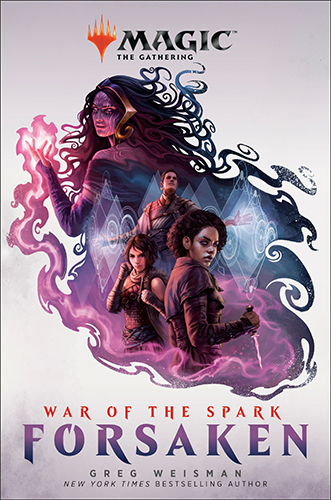 The war is over and Nicol Bolas has been defeated, but the story goes on. In War of the Spark: Forsaken, the next thrilling Magic: The Gathering adventure, uncertainty reigns. In the new novel written by Greg Weisman, learn more about what comes next for the heroes of the Multiverse.

Ravnica's Guilds Seek Vengeance – Nicol Bolas may be gone, but as the guilds of Ravnica look to rebuild their great city, someone must pay. The list is simple, three names long: Dovin Baan, Tezzeret, and Liliana Vess. Driven by anger and grief, just how far will the guilds go to exact revenge?

Lilianna Vess's Future – Truly free of her debts for the first time, Lilianna Vess should feel liberated. Instead Liliana flees from those she once called allies and friends. As enemies close in and her survival is at risk, the question that truly beguiles her is "Who is Lilianna Vess, really?"

Kaya Conflicted – The unlikely leader of the Orzhov Syndicate has been tasked with bringing Liliana Vess to justice by any means necessary. The mercurial ghost-assassin finds herself caught between the Ravnican guilds and her newfound duty to the Gatewatch.

The Future of the Gatewatch – As the team says their final goodbyes to the fallen Gideon Jura, Jace, Chandra, and others struggle with questions about their place in the Multiverse.

New Insights into Characters – Tracking down fugitives who don't want to be found requires help. As Vraska, Ral Zarek, and Kaya seek their prey, it leads to exciting revelations about intriguing characters like Teyo Verada, the Wanderer, and more. Even Rat, the gateless girl few can see, may not be everything she seems

War of the Spark: Forsaken will be released November 12, 2019 and is available for preorder now!