ye-roll. Come on. The Warrior creature type is the dull one.

What? Are you kidding me?

Warrior's the type that gets slapped on when the creature merits a class (i.e., when it's a sentient humanoid that's doing an obvious job), but doesn't have any clear role other than fighting, right?

No. You do not "slap on" the Warrior type.

Of course you do. You have a goblin, it's got a spear or something, it has power and toughness—it's a Warrior.

The Warrior type is much more than that, Mr. Hypothetical Italics Naysayer Person. It's the type that embodies the central conflict of Magic laid bare in its most raw and elemental form—war.

Wouldn't it be the Wizard type that embodies the central confl— 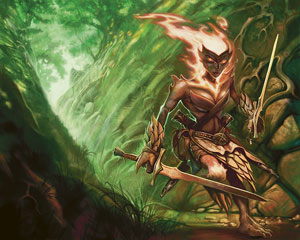 Buzz off—it's Warrior Week, okay? Wizards already had their week in the sun. And yes, it's a game about powerful dueling wizards, but Warriors leave the spellcasting to others and get down to basics. They're about sweat and blood and leaving the edge of your axe just a little less sharp so it'll bring maximum hurt. They're about Bennettian facesmashery. They're about getting in your enemy's face and expressing your disagreement with his values personally and with extreme immediacy, in a way that makes him understand your point of view through hitting.

Look, you're a planeswalker, right? And you're squaring up against another such spell-hurling, creature-summoning traveler of the multiverse. What do you pull out of your holster to bring the pain? Some random monster might be good for raw damage capacity. Certainly summoning a baloth to do your bidding is a strong move in any test of wills. Summoning a wizard might, yes, get some tricky things done. But summon a warrior and I guarantee you're getting your point across, and fast. Warriors Korlash, heir to Blackblade, Viashino Sandstalker, and Ambassador Oak.

The other main fighting class in Magic (and in Morningtide) is Soldier, an altogether more organized and ordered fighting force than the Warrior class—which Warriors see as working in their favor. The fierce spirit of the Warrior could never be contained in a uniform. Orders, as they see it, are for sheep—the best leadership comes from a Warrior's own heart. A lot of this flavor, like just about everything else in Magic, comes down to the color pie.

Because the five colors of Magic clash in terms of their values and principles (and even in whether values and principles are good things to have), Warriors appear in greater density in some colors than in others. Which color has the most? Which the least? Look, I'm not going to just tell you. You're going to guess, and I'm going to judge your knowledge of the color pie and your attunement with the way of the Warrior. Using my highly developed interbrowser psionics abilities. Yeah.

Okay, arrange the colors in order of the number of mono-color Warrior creatures that appear in them, least Warriors first. (If you're somewhere that you can get to your Magic cards, you can select a card of each color and arrange them that way.) 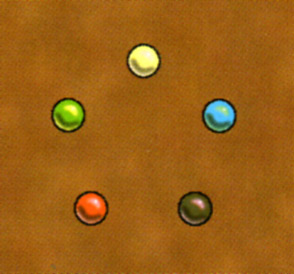 Okay, as of Morningtide, which color has with the creature type Warrior?

Moving on. What color has ?

Okay, now it's down to two. Which order? Which color has the most Warriors, and which has ?

There are also 22 multicolor Warriors, and one artifact creature in Hollow Warrior. The Legends set had a lot of gold creatures printed with the now-defunct creature type Legend, and in the Grand Creature Type Update a lot of them became Human Warriors.

And Morningtide brings us the only noncreature Warrior in Obsidian Battle-Axe. You may not have known this, but Lorwyn has a bit of volcanic activity at its far outskirts—check out the Morningtide novel by Cory Herndon and Scott McGough for more detail on that. When the mountains' pyroclastic flow sizzles its way into parts of the Merrow Lanes river system, you can be sure that the merrows' silver tongues complain eloquently about the damage to their habitat. But giants enjoy mining the obsidian that results, and turn it into weaponry infused with their natural Warrior spirit.

One of the best parts of my job is reading the email and forum posts generated from this column. The emails can be particularly eloquent, and I wish more of them could be shared with you guys. To that end, I'm introducing a new feature of Taste the Magic—the Letter of the Week. Click the email icon at the bottom of the article to write in, and you might get your letter printed in TTM.

In last Wednesday's column, I requested the help of orbitoplanar topologists to help me figure out an odd planar model of Lorwyn. While the orbitoplanar topology profession currently suffers from a tragic lack of existence (sort of like interbrowser psionics), I got quite a few creative emails from impressively qualified and smart people. Friend of the column Aaron Q., a college senior in physics, creative writing, and interactive digital media (!), truly gets into the spirit when he writes,

[...]Upon a short study of how one could path a sun traveling in a path that only dips below a horizon on a plane of non-standard shape, I discovered that a Möbius strip would not do. The sun could not path is such a way as to allow all sides of the strip to receive light at the same time, that and the required twist would cause an awkward gravitational field anomaly, which could easily be resolved by placing Glen Elendra there. [Ha! – DB] The gravitational flux itself would lend a hand to the transportation magic of the faeries traveling to and from their rings. Regardless, such a planar design would be incongruent with the current flavor, though such a thought should not be shed completely. I do think a topology similar to an Umbilic Torus or figure-8 Klein Bottle could work.

Regardless, the topography of Lorwyn could be none of these things due to the flavorful restrains of never-ending daylight across the entire plane, barring, of course, multiple suns. Seeing as Lorwyn, presumably, only has one sun, the option of a one sided flat plane becomes obvious. The shape can be whatever you like, square, rectangle, circle, storybook, whatever.

This is where I would reference an attached diagram that I created, painstakingly, in Publisher (the lack of Illustrator on this machine is a great loss), but I couldn't find a way to attach said diagram. So we will have to live with the most vivid descriptions I can come up with.

Let's choose a surface, a circle let's say, and on this circle is Lorwyn, all the trees, and Treefolk, the mountains, and the Giants, the rivers and waterways, and the Merrow, all living on this idyllic circular plane. The plane needs depth, so let's stretch the circle into a cylindrical shape. We need the depth to give the plane gravity, or else, when we add the sun, all the cute little Kithkin will get sucked off into a fiery death, and that isn't very Lorwyn, a bit more Event Horizon really. Now, if we wanted to, we could design the bottom surface to create equal gravitational pull on all parts of the plane, but a cylinder will do for our purposes. Now we add a stationary star, some distance away from, and a little above our plane. Just for fun, let's start the plane spinning, along its central axis, coming straight up out of the plane, perpendicular to the ground. Now the sun will appear to travel in a circle as viewed from Lorwyn. We can picture this circle by drawing a line from the center of the sun, to the center point in the plane, the "light line," and raising a Wall of Glare up from the edge of the plane, and mark where the Light Line and the Wall of Glare intersect. Now, if we were to put a pendulum, like that of a grandfather clock, onto the bottom of the plane, and set it into motion. The plane now tilts. If it tilted so far as to have the Light Line almost hit the edge of the horizon... We would have a path that would look like a basic wave around the plane, coming close to the horizon, and then pulling up into the sky before coming back down again. We now have the Orbitoplanar Topography of Lorwyn. I hope that I explained it well enough! If you have any questions, drop me a line. [...]

Thanks Aaron! An enormous Vorthosian pendulum, swinging a cylindrical plane back and forth to cause the sun to appear to arc back and forth across the sky. Genius—of the slightly mad sort. I daresay Aaron has a little Izzet blood in him.

Don’t miss your chance to attend a Morningtide Launch Party near you this weekend. Special "Midnight Madness" locations in North America will begin selling Morningtide at 12:01 a.m. on the set’s release date: this Friday, February 1, and events will continue throughout the weekend at participating stores. Besides getting your first chance to buy packs of Morningtide, you’ll also be able to play in Sealed Deck events and win cool prizes. And don’t forget, Morningtide is legal in Constructed on its release date!