We Are the Champions, My Friend

ome call the world of Kamigawa “the Land of a Thousand Stories.” But all those stories will end in tragedy if the kami get their way. Champions of Kamigawa will introduce you to this new plane, and to its very serious troubles. From bloodthirsty ogres to scheming scholars to the minor problem of gods attacking their worshippers, there’s certainly enough happening for a thousand stories – maybe even more.

Loosely based on Japanese myths and folklore, Kamigawa is a chance to really put today’s Creative vision to the test. Although there is a central story told in the novels, the set’s many legendary creatures give artists and flavor text writers the opportunity to start any one of a number of stories that branch off, or have nothing to do with, the core tale. Of course, some of these stories have already been told through the official Champions website, but many more have been left for you, the player, to seek and imagine. As far as we’re concerned, this is a good thing, because that means we’ve given you a rich world and interesting characters that aren’t limited to just acting within a single story.

Speaking of the world, let’s take a little peek into this plane. The time: long before Mirrodin was a gleam in its creator’s eye. The place: the world of Kamigawa, a land deeply rooted in tradition and spirituality. For longer than anyone can remember, they have honored the kami, powerful spirits that inhabit and drive everything, from the wind to light to growth itself. Knowing that the kami created and control everything that is and will be, the people treated these spirits as gods. The physical and the spiritual lived in harmony for ages.

But that harmony was unexpectedly shattered the day a group of kami manifested themselves to attack a village called Reito. Its entire population was slaughtered, and the Kami War began, pitting godlike spirits against their very mortal worshippers. Of course, everything is stacked against the mortal world, but the high stakes they face just might be the edge they need to win. Yet how can they, when they don’t even know why the war even started in the first place? For years, the kami showed little interest in communicating or negotiating; what could have angered them so? Someone had to find out, and quickly, before the kami wiped out mortal civilization.

The set, and the story, focuses on one area where the peril was greatest. It was ruled by Lord Konda, whose family led much of Kamigawa for generations. From the halls of Eiganjo Castle, he commands a huge samurai army, led by General Takeno, one of the most trusted and well-known warriors in the land. But even his authority and power were long unable to stop the carnage. Although Eiganjo Castle remained untouched by kami attack, Takeno’s armies were ineffective at best in dealing with the kami threat at large. Many fine soldiers died defending the daimyo’s lands.

The kitsune, fox-people loosely allied with Konda, have always lent both martial and spiritual power to the lords of Eiganjo. Stoic, yet with a notable mischievous streak, kitsune made both wise clerics and skilled fighters. Living amongst the susuki-grass fields surrounding Eiganjo, they had simple lives compared to the pampered and perfumed nobles of the castle, but this suited them just fine. They were among the most concerned about the origin of the kami’s anger, and devoted much energy to finding out why the blood of their youth was being spilled.

The Kamitaki Falls, part of one of the world’s greatest rivers, was also the home of Kamigawa’s most learned scholars. Human wizards built the Minamo School above and in front of the mighty falls, creating an isolated place where the most talented and promising mages could learn the arcane arts and study in Kamigawa’s largest library. But that’s not all the falls had to offer. In the clouds above was a city inhabited by the Soratami, nicknamed “moonfolk” by those on the ground. They were a mysterious race, elegant and wise, preferring to keep to themselves in their cloud cities, and pursuing their own mysterious agenda. Only something as serious as the Kami War could have brought them down from their lofty home.

Takenuma Swamp was a festering pit of dishonor, home to all sorts of depraved beings. Ochimusha, samurai who dishonored themselves through selfishness or cowardice, often had nowhere to go but Takenuma. The rat-like nezumi supported themselves through dark magic, mercenary work, or theft. But the darkest of Takenuma’s inhabitants were its ogres. Unlike the rest of Kamigawa, who had mostly abandoned the kami since the war started, the ogres still worship the oni, twisted demon kami who controlled forces like evil and death. Wherever ogres walked, blood flowed freely as they strove to satisfy the hideous whims of their oni masters.

Hidden within the peaks of the Sokenzan Mountains were many distinct mortal factions. The akki goblins, roly-poly, hard-shelled little things who delight in deadly pranks, sustained themselves through hunting and robbing the victims of said deadly pranks. The human bandits led by powerful warlord Godo also roamed Sokenzan looking for victims, human and kami alike. A wizard named Kumano was the most powerful of yamabushi, wandering shamans whose magic and combat skills were particularly effective against kami. In fact, he was rumored to hold the secret to destroying the kami once and for all. But if he did know it, he shared it with no one. Then there is Shinka Keep, inhabited by ogres who worshipped red-aligned oni. Hidetsugu, the master of Shinka, worked night and day to increase his power. There were also ogres who refused to swear themselves to oni, but they were shunned exiles in both Sokenzan and Takenuma.

The Jukai Forest was a vast, dense place filled with many hidden secrets. Apart from white’s clerics, Jukai’s inhabitants had the closest relationship and the deepest worship of the kami in all Kamigawa, which means that the war struck them especially hard. The human monks, led by the elderly Dosan, lived their lives in peace, seeking enlightenment in the isolation of the forest. But even here, the kami came, forcing monks who once trained their bodies only as a path to enlightenment to use their skills in battle. The snake-like orochi were all but unknown to the rest of Kamigawa, having reached out to the Jukai monks only decades before the Reito massacre. However, they too felt the sting of kami anger, and some hotheaded youths started to question the truce between orochi and human. After all, must not the humans have been responsible for the kami’s outrage…?

The central story of the block is the main way readers and players will discover the answers to some of the key questions about the Kami War. It follows Toshiro Umezawa, a young descendant of one of Kamigawa’s most honored families. But he is the black sheep of the Umezawa clan, an ochimusha scoundrel, mercenary, and thief who cares about nothing but himself. But the Kami War will force him to care, if only to ensure his own survival. Michiko Konda, daughter of the great lord, will provide a less selfish motivation as the two of them struggle on their own paths to the truth. Will either of them find what they’re looking for? Does the mortal world have a prayer against the very force that created them? That’s a question for the novels to reveal.

As for myself, my job is to reveal a storyline-related card. I’ve never had as many choices as I do with Champions of Kamigawa, but here’s one that is perfect for the role. 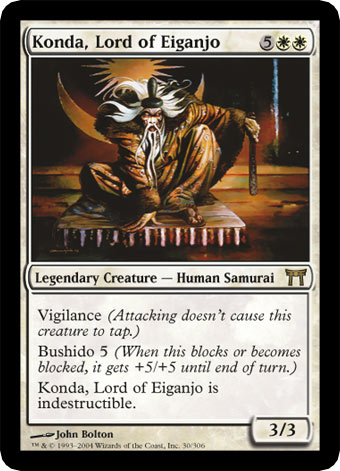 Before coming into power, Konda was no slouch on the battlefield himself, and his card reflects that. He was a powerful practitioner of bushido, which joins the ranks of flanking, provoke, and other pure combat keyword abilities. Unblocked, he’s a beefy 3/3. But once he gets involved fighting another creature, his stats skyrocket, as bushido gives creatures a bonus if they block or are blocked by another creature. Most creatures with bushido get bonuses of +1/+1 or +2/+2, but Konda, powerful figure that he is, gets +5/+5! No matter what the set, there are very few creatures that can stand up to an 8/8 attacker or blocker. Plus, he’s got vigilance, a new keyword for an old ability: not tapping when attacking. This means that Konda can attack each turn and still hang back to be an 8/8 blocker. With Konda’s power over the rest of Kamigawa, and his commitment to protect it, this is very appropriate.

As if he weren’t powerful enough, he’s also indestructible, a mechanic making a triumphant return from Darksteel. So not only is he a 3/3 or 8/8 attacker that can also block, he’s also pretty much unkillable! Has there ever been a creature more suited for the front lines, or as the crown jewel of an offensively based white deck? Story-wise, the indestructibility reflects his… Huh, wait a minute. What DOES it reflect? How can a mere human, even the lord of Eiganjo, be indestructible? What the heck is going on here? Hmmm. I have a feeling we’ll find out, and sooner than we think.

(By the way, note Konda’s creature type. Champions of Kamigawa is the start of a whole new era in legendary permanents, in more ways than one. But I’ll let the R&D guys explain all that to you.)

Not since the Legends set has there been so many unique characters and potential stories to work with. I have a feeling that Champions of Kamigawa will be talked about for a long time to come, over both cards and creative elements. So immerse yourself in Kamigawa, and enjoy the world… As long as it lasts, anyway.