This Week in Magic History: February 14-20 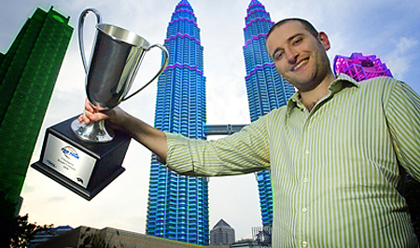 The whispers started early on Friday at Pro Tour–Kuala Lumpur…did you see who's 5-1? The rumblings continued through the middle three drafts…. he hasn't lost a match since round 3! The wave was at full force by the end of Saturday… he's in the Top 8! Finally on Sunday, the echoes woke up completely and Hall of Famer Jon Finkel reclaimed his rightful place atop the Magic world.

Jonny Magic steamrolled the field with overall record of 16-1-1, powering through the Top 8 in typical Finkel fashion. One of the fastest minds in the history of the Pro Tour, Finkel matched that mental acuity with a blitzkrieg pace that overwhelmed his opponents. First fell Guillaume Wafo-Tapa in the quarters, then Marcio Carvalho in the semifinals, and finally Mario Pascoli in the finals en route to Finkel's third Pro Tour title (and record 12th Top 8 appearance).