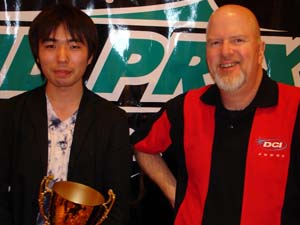 his week in 2006, Shuhei Nakamura is the Grand Prix–St. Louis Champion. For the last six rounds on Sunday, the three-time Pro Tour Top 8 competitor was deeply unhappy with his deck that had none of the degenerate redundancy of the other decks everyone around him seemed to be sporting. He contented himself with a pair of Heidar, Rimewind Masters and a pair of Blizzard Specters. He was too busy paying attention to his snow mana to get duplicates of his other cards.

The big story coming into the Top 8 was Kenji Tsumura questing for his third straight Limited Grand Prix title. With all the pressure and attention on Kenji, Shuhei quietly dispatched his first two opponents before squaring off with Zac Hill's degenerate Surging Sentinels deck in the finals. Zac had derailed Kenji in the semifinals but he could not withstand the hand-stripping fury of Blizzard Specter in the final game or the pro-white of a jump knight in the first one. In between, Zac got off a degenerate surge of soldiers on turn three but it was the only time they stood for inspection in the whole Top 8.