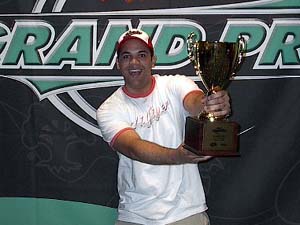 heystarted with 502, cut to 64 for Day 2, but in the end, there was only one Osyp Lebedowicz. Osyp piloted his Vial Affinity deck to an early qualification for the top 8 and then dispatched a U/G Tooth deck in the quarters, beat up on a Big Red deck in the semis before facing Michael Kuhman in the finals, a rematch of an earlier round between Big Red and Affinity that Osyp dominated.

Unfortunately for Kuhman, Osyp nailed the same result in the finals, swiping a quick turn 4 win in game 1, and then rolling with Kuhman's removal in game 2 before eventually finishing things with a pair of Atogs and Cranial Plating. Osyp's victory gave him a Block Constructed Grand Prix title to match the Block Pro Tour trophy already on his mantle.

Aside from Osyp's victory, the big stories on the weekend were the four amateurs placing in the Top 8 (including American JSS champion Jeff Garza), and the utter dominance of Big Red and Affinity decks over the rest of the decks in the metagame, though in the end it was Affinity piloted by New Jersey's favorite Ukrainian that took home the top prize.