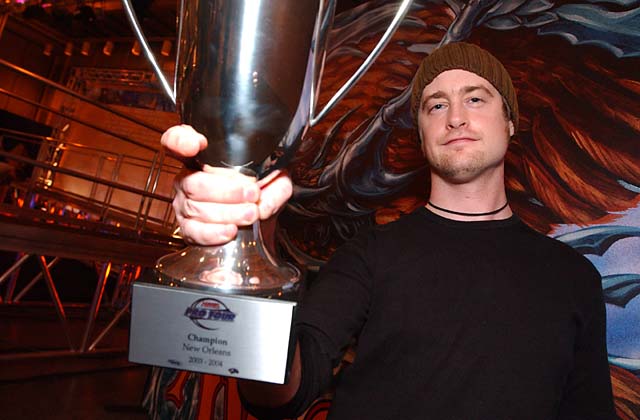 Armed with the mighty Punisher concoction "George W. Bosh", a Tinker deck that exploits the power of Goblin Welder, Rickard Österberg sailed over a sea of mono-blue Tinker decks, Gob-Vantage, and Severance/Charbelcher in New Orleans.

In the quarters he faced Eugene Harvey, piloting the CMU-TOGIT "So Big Tinks". Chalice of the Void had been hosing people all weekend, and it continued to work its magic against Österberg. They went the full five games, with Österberg killing Harvey with a hasty Platinum Angel. Harvey's Upheaval was useless. In the semis, he showed his deck's power against Yann Hamon and the french Severance/Charbelcher deck "The Clock". It was a slaughter in three games.

On the other side of the bracket, Tomohiro Yokosuka's Psychatog deck couldn't handle Nassif's Clock, and Nassif swept. Masashi Oiso kept hope alive for Japan, defeating Hans Joachim Höh in four. He then took on Nassif, and it all came down to one Brainstorm. Nassif's deck served up Tinker he needed, and advanced to the finals.

The finals were another tight contest, but the star of the weekend, Mindslaver, was not to be denied. Nassif conceded before Österberg could steal his third consecutive turn. Congratulations to Rickard Österberg, Pro Tour - New Orleans Champion!