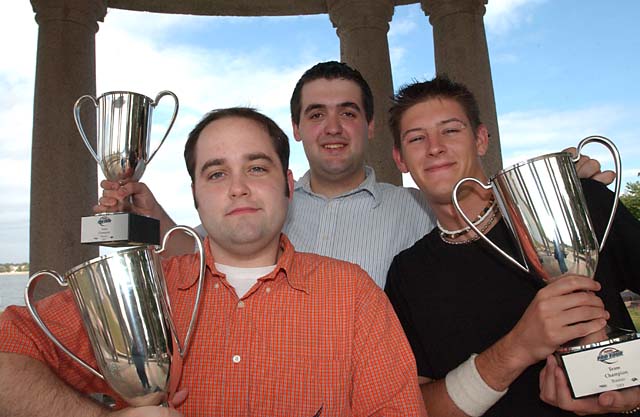 On this week six years ago, The Brockafellars became the 2003 Pro Tour–Boston champions! Armed only with their inborn talents and vast experience in Limited they edged out the Sealed deck portion with a 4-2 perfomance. Round seven was their first-ever Onslaught Block Team Rochester, but when you're William Jensen, Brock Parker and Matt Linde, though, you can get away with forgoing practice drafts.

In the other bracket, the dark horse Original Slackers (Lovre Crnobori, Jake Smith, and Rickard Osterberg) were facing the mighty Zabutan Nemonaut (Mike Turian, Gary Wise, and Eugene Harvey). Everyone assumed that the the Nemonaut would crush, but when Gary Wise's "lock" match got stolen from him thanks to mana flood, suddenly the tables were turned. Soon it was the Norwegians drafting against the Brockafellars.

It did not go well for the Norwegians. Though Jensen described himself as an underdog, the other two matches were solidly in their favor. And then Huey took his match in two games. It was definitely The Brockafellars day. Congratulations to The Brockafellars, 2003 Pro Tour–Boston Champions!