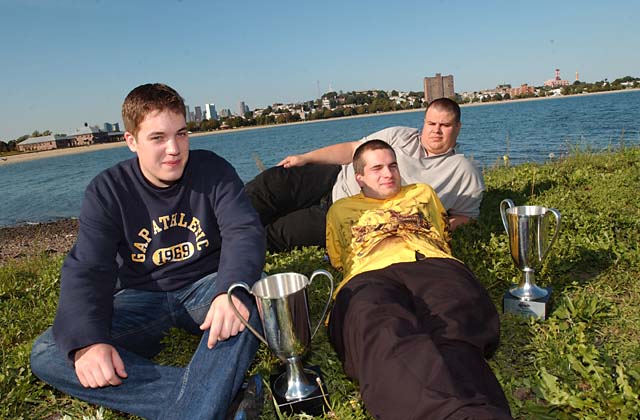 Deep down inside, no one was surprised. After an undefeated Day 2, Phoenix Foundation (Kai Budde, Dirk Baberowski, and Marco Blume) reaffirmed their dominance of the Team Rochester Format. The previous year, they'd took the tournament by storm, and after claiming the Team Masters they were just accepted as the best in the business. Lifetime undefeated isn't just a fancy turn of phrase.

This time around they faced Slay Pillage Gerard (Jonathan Sonne, Scott McCord, and Gerard Fabiano) in the semis, and after Baberowski upset his match 2-0 Budde took Game 3 of his match against Fabiano to advance to the final round. There they met 2020 (Steven Wolfman, David Rood, and Elijah Pollock), the Top 4's Cinderella story. They had just bested Courtney's Boys (Gary Wise, Neil Reeves, and Bob Maher) in a huge upset, entering the final draft eager, but knowing that they were the justified underdogs. The results confirmed that suspicion. Though Steve Wolfman was able to dispatch Baberowski quickly, Budde and Blume were not to be denied. David Rood had the honor of being taken down by Kai in the deciding match.

The repeat performance further elevated Kai to a mammoth six Pro Tour wins and raised his teammate Baberowski has three to his name, putting him above Jon Finkel and Tommi Hovi. Blume's two wins tied him for third place. Not only were Phoenix Foundation the undisputed masters of Team Rochester, they became the top three players in terms of Pro Tour wins! How ridiculous! No wonder two out of the three of them are in the Pro Tour Hall of Fame! Congratulations to Phoenix Foundation, Pro Tour–Boston Champions!