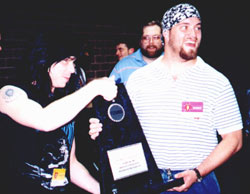 been a little busy, but I hear there were a couple of Grand Prix this last weekend, one in Columbus, Ohio; and one in Birmingham, England. Let's get straight to the decklists:

The Fall 2004 Magic set, formerly codenamed "Earth" has had a change of codename; it will now be referred to in internal documents as "Dungeons." It will kick off a block devoted to classical medieval fantasy themes, which will culminate in the third set, scheduled to be released in Summer 2005, codenamed "Dragons." Magic brand and R&D are especially excited about the middle set, which they have been referring to as "&".

"This is the first set ever to have a codename that's a single punctuation mark," enthused Mark Rosewater. "That's trivia gold! I'm going to be ask people to name the set with the shortest codename for years."

At the same time the codenames were changed, "Dungeons" was given its official name: Spellfire. The combination of Magic: The Gathering and Dungeons & Dragons will provide synergy by thinking outside the box and allow Wizards of the Coast to take the initiative in leveraging its scalable core values into an explosion of streamlined buzzwords which will take the marketing world by storm. Or something like that, anyway."

Of course, rules and terminology of the game had to be adjusted slightly in order to fully immerse “Spellfire” players in a D&D experience. For example, players will roll a D20 to determine initiative at the beginning of each combat step. Also, in addition to buying new cards, players will be expected to occasionally purchase entirely new rulebooks.

Among the new game mechanics to be introduced in Spellfire is the “Saving Throw” which will occasionally allow a player to halve the damage they would take from a spell. A mechanic which will be welcomed by Pro Tour players is the sliding life total mechanic; players in Premier tournaments will get to start with a life total equal to the number of Pro Points they currently have instead of just 20.

Wizards of the Coast Sold to German Consortium 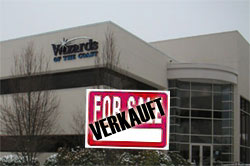 In a move that shocked industry insiders (by which I mean "people on message boards"), Hasbro has just announced that it will be selling the Wizards of the Coast business to a small company from Germany. Although Wizards of the Coast continues to be tremendously profitable, the offer was simply too much money to ignore.

The German Company has only three employees, counting its President/CEO, Kai Budde. "We at Phoenix Foundation have been pursuing this goal for some time. The introduction of the Team format allowed Dirk Baberowski, Marco Blume, and myself to leverage our skills and put together enough cash to initiate a hostile takeover. Hasbro didn't want to lose their whole company, so they had no choice other than to sell us WotC."

The new owners haven't announced any new policies yet, although it's anticipated that they will roll back the rules banning employees from playing on the Pro Tour.

This was an easy one: Giant Trap Door Spider is an anagram for the man who created Magic, Sir Ronpert da Togipad, the noted Italian explorer, who invented the game on his historic seventeenth-century trip around the Cape of Good Hope.

How many Arcbound Workers does it take to screw in a lightbulb? 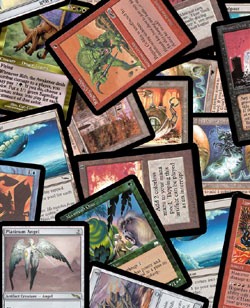 "I had out three swamps. two plains, a forest, six islands, a Rith, the Awakener, a Sol Ring, a tapped Time Vault, and six 1/1 Insect tokens. It was my opponent's turn, and he had out four Cloudposts, two Urza's Mines, an Urza's Tower, four Urza's Power Plants, twelve forests, twenty mountains, a Mwonvuli Ooze, and a Raging Goblin he'd cast Animate Dead on.

"I had a Silhouette in my hand and my opponent had a Hammer of Bogardan in his graveyard. He looked carefully at the board situation -- did I mention that he also had a Steel Wall, but that I had a Juggernaut? And also, it was a multiplayer game, and the third person at the table had a bunch of land I don't remember, a Platinum Angel, two Uktabi Orangutans, a Llanowar Elves and a Fyndhorn Elves, plus a Humility out?

"Okay, so it was the guy with the Ooze's turn. And I forget exactly what happened, but I'm pretty sure it involved either The Cheese Stands Alone or Journey of Discovery, and I won.

Kai summoned an Accursed Centaur once.

Please e-mail me any Magic news, stories, tournament results, baseless slander, pictures of celebrities, exciting money-making offers, or anything else you think should appear in this column. You can contact me by sending an e-mail to ashv at kingsgames dot com.