What Nature Makes, Magic Can Modify

haven't personally attended a Launch Party (formerly Release tournaments) since Ravnica: City of Guilds (I finished second!), but I think that I am going to make a point of hitting the Eventide Launch Party in a few weeks. Why? The Launch Party promo card is an absolutely stupendous creature! I don't know anything about trading (and in fact we columnists don't even get a notice as to the commonality of the cards we preview), and I don't want to invoke that hallowed and diamond-encrusted name of Tarmogoyf at this stage of the summer prematurely... but this creature seems really awesome and versatile, potentially big but cheap to play. Like Tarmogoyf, I can see it going into all different kinds of decks and being a great contributor to them. The only problem? Magic is a game of increasingly awesome two-drops, and this card only costs one mana. 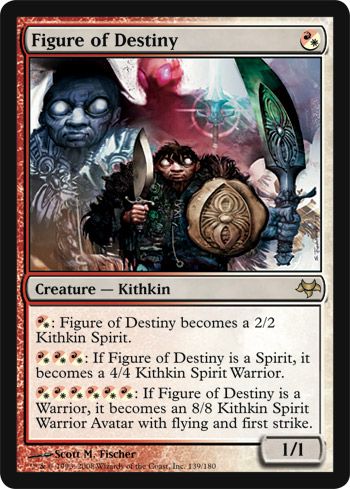 Did you catch how Figure of Destiny is almost a two-drop? While it is technically a one-drop, the first ability on that list is:

as a down payment, and an additional

Figure of Destiny fills a couple of different holes, helping to solidify the Swiss cheese of a beatdown deck's mix of requirements, two of them quite well. Since it is

for a 2/2 (more or less), Figure of Destiny is a passable Grizzly Bears. No one writes home for a Fresh Volunteers, but especially in a red deck, a generic 2/2 for two mana should be fine. (Never forget where you came from! The Sligh decks of old attacked with their Ironclaw Orcs with pride). At the same time, Figure of Destiny is technically a 1/1 Kithkin for

. It might not actually be a vanilla one-drop, but on the first turn, it can do an awfully good impression of one. Why does this matter?

Many of the best red decks in history have been founded on the principle that lots of one-drops lead to consistent early game draws, which can and will punish opponents with unstable mana bases and / or slow draws. Unstable mana bases? Has anyone seen the Rube Goldberg machines that make up a modern land mix (Standard or Block)? Figure of Destiny will deal 1 (or sometimes 2!) on turn two, with the promise of more—dramatically more—down the line.

David E. Price didn't win his Cursed Scroll Pro Tour until the spring of 1998, but he struck a tremendous blow for red decks in the summer of 1997, with a perfect 6-0 performance in the Standard portion of the United States National Championship. Of course he played the maximum number of Ball Lightnings, but Dave went one better than most aggressive players of the day, running a redundant pair of Viashino Sandstalkers as even more devastating haste on turn three before finishing it with quadrouple 4/4s for four.

Figure of Destiny allows you to do something similar—probably better actually—for three mana. Bam! Instant 4/4.

One of the ideas running through my head initially was to play Figure of Destiny on the first turn, then come crashing in on the second turn, discarding a Simian Spirit Guide, and going straight to Baloth Boulevard... But unfortunately, this ability requires a bit of a down payment. You typically have to go 2/2 before you can go 4/4 because Figure of Destiny will only become a Kithkin Spirit Warrior if it is first a Spirit (more on this later, though).

This is a very exciting card in a red deck, not just because of how it can perform in the Red Deck Wins curve framework, but because of how effectively it can serve as a mana sink. The whole Sensei's Divining Top school of burn decks was founded on the idea that the ability to regulate both mana and spells would lead red to new heights of success... Figure of Destiny might not have the range of an Arc-Slogger, but this new card gives you something useful to do with your mana, even when it looks like you are flooded. 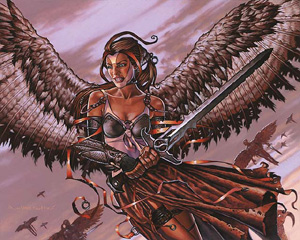 Eleven total mana might be a lot to ask, even for an 8/8 flying first striker, but don't forget that you can put a down payment on Figure of Destiny, pay for it over thirty years, like a low interest mortgage (your opponent will be anticipating the crash). You probably wouldn't want to pay seven for a flying, lifelinked, Erhnam Djinn under ordinary conditions, but the ability to pay for Exalted Angel over two or even more turns, three plus four, has allowed the card to be one of the standouts of Onslaught block, to the point that it sees Extended and even Legacy play.

Imagine yourself in a topdeck fight with five lands in play. You run out Figure of Destiny. Your opponent quickly considers his destiny. One down, 1/1; he draws and passes; you spend a second mana, then tap the rest to untap with a 4/4. Did you just topdeck a land? If you did, he had best have ripped a Terror; if not, the 4/4 is still pretty good!

Figure of Destiny is pretty awesome (obviously), but it is covered in text, and a lot of what is going on long-term with this card will be confusing.

This is probably obvious by this point in the article, but the transformational upgrades next to the various

symbols on this card are more or less permanent; they do not "wear off" at the end of turn.

What might not be as obvious is how some of the interactions work when everything isn't going according to scripted sequence. You can pay

with a 1/1 Kithkin in play... But nothing special will happen if Figure of Destiny is not (yet) a Spirit. On the other hand...

If you have a full biggie-sized 8/8 everything Avatar, you can pay

and downgrade to a 4/4 (Kithkin Spirit Warrior Avatars being Spirits as well as, you know, Kithkin, Warriors, and Avatars). What might not be obvious is that in either case, Figure of Destiny will retain both flying and first strike! Why would you want to downgrade? I don't know. Reprisal, maybe? It probably won't come up very often; just know that you can.

A card like this is obviously strong in the obvious ways, but a guy like me—hey—always looking to cheat. How do you get around having to pay that

in the middle before you can upgrade straight to 8/8? A few years ago there were versions of Counter-Rebels that featured this really cool card Unnatural Selection. Unnatural Selection worked a couple of different ways: the more obvious was that you could turn your opponent's creature into a Rebel and put it at the bottom of his deck with a Rebel Informer (a singleton you searched directly into play with Lin Sivvi, Defiant Hero). Under the old "legend rule," you could murder creatures if there was more than one copy in play by judicious application of the (then) creature type Legend (I never really understood why this worked, only that it did).

In a roundabout way, this leads me to two points:

1) Figure of Destiny doesn't care how it became a Spirit or a Warrior, only that it did. The typical way is of course to spend

so that you can spend

... But you could skip that step if you had Unnatural Selection in play; we don't actually have Unnatural Selection as an option in Standard or Block (and in Extended only until the rotation in October), but something like Blades of Velis Vel could definitely provide a shortcut.

2) This card is not not NOT legendary, not even the 8/8 version. I looked at it several times to make sure. A lot of the time cards like this are legendary so and so, legendary such and such... Not Figure of Destiny. This one is a plain old Kithkin (Spirit Warrior Avatar). Part of what will make this such an automatic four-of in so many decks is the ability to play four copies completely and utterly without fear. Mike Turian used to say Isamaru, Hound of Konda was so good you should always play four... but it was still annoying to rip a redundant copy, especially when the opponent was neutralizing your first one with annoying cards like Pillory of the Sleepless instead of playing hush puppy with a real removal spell.

I spent most of this article considering Figure of Destiny as a tool for the red deck, but it is obviously equally effective in White Weenie Kithkin. Figure of Destiny is a one drop / two drop, and can go large long in exactly the same ways. However in a White Weenie deck, it enjoys some additional benefits that aren't necessarily there from the other side of the Forest.

Now Figure of Destiny's abilities will typically overwrite other effects that determine its power and toughness. However, certain effects will still apply, especially after one of its

A troublesome Treefolk player might apply Lignify to your Figure of Destiny, ruining its day 0/4 style (and you will not be able to use one of its abilities to get out from under the Lignify, because it doesn't have them anymore). But on the other hand, a surprise Barkshell Blessing will take Figure of Destiny from 2/2 to 4/4, 4/4 to 6/6, or 8/8 to 10/10.

Counters will apply to Figure of Destiny like they would to any other kind of creature, regardless of when they were applied. Therefore, one of the innumerable -1/-1 counters we find in Shadowmoor can kill the 1/1 version if there is no

available... but on the other hand, the +1/+1 counter of a Rustic Clachan will remain effective regardless of when it was applied.

And like a good White Weenie creature, Figure of Destiny will enjoy the full effect of a card like Glorious Anthem.

So all in all, if you hadn't already decided that you were going to your local Eventide Launch Party, I trust that you have figured out to get in on the ground floor, before Figure of Destiny goes all Tarmogoyf on all of us. Red decks... White Weenie... Your trade binder... Any and all can benefit from this effective new tool.

Then again, if you really can't wait...

Eventide Prereleases are this weekend!

May you open Figure of Destiny and kick much local butt!