Whispers in the Dark

, everybody. Get your jaws nice and loose. Stretch 'em out, relax the muscles. And now… drop them! 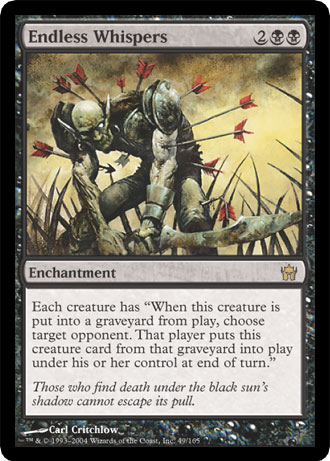 Egads! Hold on a sec… checks calendar… nope, it's not April 1st. This card is real.

If you're anything like me, you're thinking “uuuuuuhhhhhhhhhhrrrrrrrrrgggggggggg,” because your brain has just melted. There might be some drooling involved as well. Don't misunderstand: I'm not saying this card is broken. I'm saying it's crazy. The whole set is crazy. By now, you should have realized the truth about Fifth Dawn. Despite Mark Rosewater's descriptions of the design team members, the set was not actually created by them. They merely discovered the document containing the original card file. Who did create it? Well, have you heard of the Monastery of Hu'aung? The secluded mountaintop retreat populated by 73-year-old identical albino septuplets who all went insane while trying to break the world record for watching the most consecutive hours of reruns of The Brady Bunch? Well, they have a pet monkey…

Fifth Dawn is bonkers. You guys have merely scratched the surface. Wait till you see the set as a whole. But back to this thing: Endless Whispers. Every nontoken creature—every single nontoken creature—auto-Zombifies itself… under an enemy's control! Armies will keep getting bigger, and bigger, and bigger. Nothing stays dead. Everything changes control. As an additional cost to play Endless Whispers, remove your sanity from the game.

Clearly. Let's see how some combos rank on the Crazyometer: 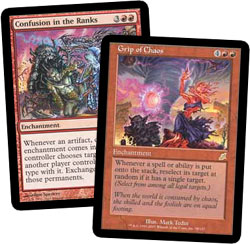 Endless Whispers + Confusion in the Ranks + Grip of Chaos in a 10-player free-for-all
Crazyometer score: Hi, my name is Mark Gottlieb.

What the…? I've got to get that thing fixed. Anyway, I'm no expert, but I wouldn't be shocked if this card is quickly ushered into the black wing of Anthony Alongi's Multiplayer Hall of Fame.

Use #2: Make your opponent reanimate Phage

Some of you figured this out the second you saw the card. That's because some of you look at every single card you find and ask “Is this the one that finally pulls off the Phage combo?” One of the recent Holy Grails of combo Magic has been finding the way to win the game by forcing your opponent to put Phage the Untouchable into play in some unorthodox manner. It was tried with Confusion in the Ranks and Animate Dead, but that didn't work. It was tried with Mind Theft, but that card was an April Fool's Day joke. Over the past two weeks, I've received a bunch of emails advising me to put a copy of Phage into my creatureless (and thus Bribery-proof) Magic Online Prismatic deck. “It's nice to have them play Bribery and miss,” they said, “but it's even better when the only creature for them to take is Phage—so they lose!” That doesn't work either, because the person playing Bribery can choose to not find a creature at all no matter how many creatures are actually in your deck. (Check out the glossary entry for “Search” in the Comp Rules.) Endless Whispers, however, is the card that achieves the dream.

You still have to hardcast Phage, and do it while Endless Whispers is in play. After that, you can pretty much do anything you want. The quick win is to sacrifice Phage immediately to Spawning Pit or Cabal Therapy or anything else. High Market! Marjhan! Thelonite Druid! Viscerid Drone! But more likely Spawning Pit or Cabal Therapy. The best part is that you don't necessarily need that third piece of the puzzle. Just attack with Phage. Your opponent can't leave it unblocked or he'll lose. He can't block and kill it or he'll lose. So he's got to chump-block Phage forever, and at the end of every turn, you get to bring the speed bump back into play on your side. How long can anyone keep that up? This tactic will be used by people who think making your opponent squirm is even better than making your opponent lose.

Use #3: Play with creatures your opponent doesn't want.

This is an extension of the Phage strategy. It's just not as immediate. Does your opponent really want that Lord of the Pit? I doubt it. Giving away the hungry, hungry Demon with Endless Whispers out is diabolical: Your opponent either gets savaged by the Lord's upkeep cost or feeds it, thus giving you a free creature a turn. Of course, while this is happening, you may be getting walloped for 7 a turn. How about Minion of Leshrac? Fun times. Even Nim Abomination can work wonders… because you also have Light of Day in play, right? Rust Elemental is fun. Eater of Days is even more fun, provided you can sacrifice it the same turn you play it. That goes double for Leveler: Play it, remove your library from the game, sacrifice it, your opponent gets it at the end of that turn, he removes his library from the game, then your turn ends. Uh-oh…

Use #4: Play a creatureless deck.

You want to take all your opponent's creatures after they die. Unfortunately, you're not as generous. In fact, you're a jerk. So you play no creatures at all. Give your opponent only bad options by pairing Endless Whispers with No Mercy. A board-sweeper like Mutilate, Wrath of God, or Decree of Pain becomes an Insurrection—a permanent Insurrection—with Whispers in play.

Use #5: Play with token creatures.

You want to take all your opponent's creatures after they die. Unfortunately, you're not as generous. In fact, you're a jerk. So you play with nothing but token creatures. They cease to exist after they hit the graveyard (and Endless Whispers specifically says it returns “creature cards” to play), so your opponent never gets your Beast Attack Beasts or Angelic Favor Angels.

The core of this deck comes from Ian Hitchcock, who wrote in suggesting Genesis Chamber-Cavern Harpy-Death Match wackiness. With the artifact and the enchantment in play and the creature in hand, you have an engine that says “

: Put a 1/1 Myr artifact creature token into play and give two target creatures -3/-3 until end of turn.” That's not exactly true. You can give one creature -6/-6 if you want. Use the Harpy's gating ability to bounce itself back to your hand so you can immediately replay it, and away we go! This seems like a fine place to stick Endless Whispers. Add in a couple of ways to sacrifice creatures and a few creatures your opponent doesn't want (good news: Accursed Centaur—the worst card in Onslaught?—fits both bills!) I never thought I'd have the opportunity to make Skulltap decks in two consecutive weeks.

Whispers of the Harpy

You want to take all your opponent's creatures after they die. Unfortunately, you're not as generous. In fact, you're a jerk. So you play with nothing but 0/0 creatures. After your Ivy Elemental, Phyrexian Marauder, or Rock Hydra dies, it'll pop up on your opponent's side as a 0/0 creature because he never got a chance to pay for X. It immediately dies again. Your opponent never gets a chance to take advantage of it. You'll get it back at the end of the next turn (trigger timing; trust me), but it will croak once more unless you have a global toughness booster like Spidersilk Armor or Mirari's Wake. However, since you're expecting this to happen, you very likely have one of those cards. Even better, rumor has it there might be some other 0/0 creatures in Fifth Dawn that work with this strategy… Stay tuned!

Until next week, whisper endlessly.
Mark