Who Is Your Other Half?

A long time ago, when I first started playing Magic, rarely were our games about who was the better player, and they almost never involved just two players. Each time my friends and I would get together, we would play some of our favorite multiplayer variants. Whether playing a chaos game where there were no teams, just loose alliances that changed quickly, or a team format where players could use their strengths to complement one another, the ultimate goal was to have fun. Magic was new to all of us, and there was a lot of territory to explore in the multiverse.

Later on, as I left my friends from youth and explored a different land here on Earth, I found a new type of play that once again opened many new possibilities. In college, the new friends I made who played Magic were much more focused on two-player matches and competitive play. Gone were the days of getting together with a bunch of players and having everyone competing for one prize. Rather, the games I was playing were much different and required many different skills and decks.

I continued my focus on tournament play, and I have never really been comfortable playing in multiplayer games since. I always liked the idea that the DCI had a defined set of rules that could dictate play and didn’t rely on a loose set of house rules that change with trends in the group. However, the DCI® has come up with a solution to this, and that solution is Two-Headed Giant.

Two Heads Are Better Than One

With the recent announcement that Wizards of the Coast is going to have a State Championship for Two-Headed Giant, I thought that I had better start looking for a partner. I started in the obvious place, with the guy who is always calling me to set up a Magic game.

Two-Headed Giant can be played as either a Constructed format or a Limited format. In a Constructed match, players can build decks that complement one another. By focusing on a fast aggressive strategy or a control strategy, players can use their decks to combine an attack. Another option is to use decks that combo off one another, using spells that normally one player may have difficulty playing early enough to defeat his or her opponent.

If the Champs event were going to be Constructed, Elliott is the player I would choose, no question. I play mostly Limited myself, but Elliott has the Internet wire for Constructed and always knows all the latest decks and what trends are out there. I have known Elliott for several years, and he is one of the people that I least want to be paired against in a tournament. Even though his Limited rating is really bad, he knows how to play and that is always a threat. But the Champs event is going to be Limited, and I know a little bit about building Limited decks, so I am going to have to look at some other players who have a little better Sealed Deck rating.

“Big Jim,” or Jimmy as I have been calling him since I dated his sister in high school, is a solid player who thinks and plays much the same way I do. The way he values cards in Limited is along the same lines as I do. However, this may end up being a problem in the long run. Since we both tend towards using the same play style, it is very possible that we are both going to want to use the same cards in our deck or play the same color combination. A good team should have members who complement one another, not players who try to perform the same roles.

Being able to anticipate what your teammate is going to do or what cards he or she might have in his or her hand is invaluable. Teaming up with a player that you know well is likely your best bet. However, making a rival a teammate may have its own repercussions. I have too much fun playing against Jimmy and trying to get into his head to make him a teammate yet. If I let him play on my side, my mind tricks might not work anymore.

Though not necessarily known as one of the best players in the area, Corey is a strong up and coming player. Corey is a very thoughtful player who is known for taking a long time to make decisions when the game gets to the critical stage where every move can be the difference between winning and losing. I sometimes find that the choices he makes during deckbuilding are somewhat questionable, but his choices during play are normally very solid. Since this is a team event, I would be able to make suggestions about what cards to play, so the deckbuilding issue may be irrelevant.

The last time I faced Corey in a sanctioned match was the final round of the Ninth Edition release event in Fairmont, WV. We were playing that match for first place. Recent improvements I have seen in his play make Corey seem like a great option for a Two-Headed Giant partner. 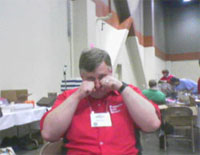 Mike Guptil is a Level 5 DCI judge, and no, I am not contemplating making him my teammate. There is a reason most judges judge, and I don’t want to find out the hard way if that is true for Mike. About this point in the teammate search, Mike reminds me that I will be the one running the 2006 West Virginia Two-Headed Giant tournament. After a little bit of crying, I have no option but to agree with him. Who could say no to that face? So, I think I have found my teammate. 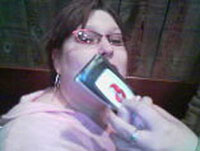 This is the only picture she would let me use for this. Bethann doesn’t actually play Magic, but she does know how to keep score. This is going to be a far more useful skill at this event. The scorekeeper sets the pace for the entire event. A good scorekeeper makes sure the event keeps moving and takes a lot of pressure off of the organizer and the judges. Bethann is definitely the best choice for a partner for this particular event.

Get Serious About Team Play

Now that the DCI is getting into the business of sanctioning a team format, it is about time that many of us start getting more serious about multiplayer formats. I know that as a judge, I still have a lot to learn about this format (hopefully before March 18). Also, as a player, this opens up a whole new field of play to participate in, and just maybe, it will bring back some of those memories from playing a chaos game around a friend’s kitchen table, where absolutely nothing was on the line but a little bit of fun.