sat in front of my computer for a good 45 minutes before deciding to write for today what I had planned to write about next week. I think once you're done reading it you'll understand why I drew such a blank. Sometimes, when you have corn stuck in your teeth, you just can't concentrate on clipping your fingernails. I have had a bit of info stuck in my craw like corn from Satan's cob, and today I am busting out the floss. 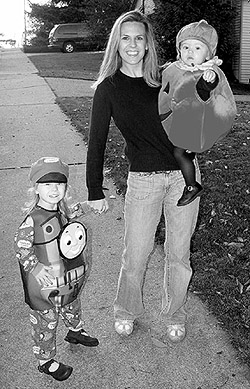 What would you do? How far would you go? How hard would you fight? These are the easy questions.

Try this one on for size:

Pretty tough, eh? Well, that's what I have been wrestling with for over a year. From November of 2004 to October of 2006 I was living the Magic fan's dream—working at Wizards of the Coast in R&D, rubbing elbows with all the colorful personalities, dipping my fingers in the big cauldron that eventually brews up our favorite game. It was everything I had hoped it would be. But one's purpose in life is not just how deeply one can wallow in one's own happiness (and I was wallowing, folks, the proverbial pig in slop). Sometimes decisions must be made that lead to the happiness of others. It's called taking one for the team.

My home peeps were not thriving out in the Northwest, in the land of coffee and drizzle. So it was with suffering in mind and soul that I left my dream job and many new friends to ferry my girls back to Ohio.

I miss stirring the cauldron. But most of all I miss the other wizards. 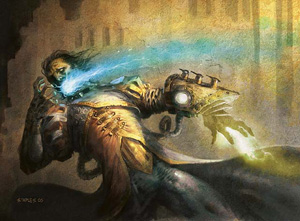 So about this corn in my teeth. Last July 28 was my last day as a Wizards employee. I continued working remotely, to finish up Future Sight, until the end of the following October. It was right about then when I got kicked in the gut with some hard, and very Azorius, news. Due to legal reasons too boring to explain, I was not allowed to do any work for Wizards for a period of 4 months (November through February.) It was bad enough to leave the job I loved so much, but to cut out cold turkey until the following year was a groin kick. No Magic art, no D&D art, no Magic names or flavor text, no magicthegathering.com.

No magicthegathering.com? But wait, Taste the Magic ran unabated through November to March... Yes it did, but not without grinding some noses. Once the Azorius laid down their law, it was pretty much a foregone conclusion that Taste the Magic would have to either end or get a new head chef. Nobody really wanted either of those things to happen. Taste the Magic had become a fixture at magicthegathering.com, and I still had so much Time Spiral, Planar Chaos, and Future Sight flavor to deliver. In the end, after fighting the good fight with the lawyers, Scott Johns agreed to take a chance on one of my harebrained ideas.

(I just wanted to take a moment to say how proud I am to have worked with Scott. He has been a champion of Taste the Magic and a great source of encouragement and empowerment. He is one of the biggest reasons why this web site is so mighty. Thanks Scott.)

So my crazy idea was to write all of the articles for October, November, December, January, and February all in the month of October, before my four-month blackout. It was an insane plan, but, as luck would have it, both Scott and I were Wizards without Bonded Fetch. The plan would require preplanning theme weeks up to five months in advance. It would require extra editing when my articles, written months earlier, bump into or double up on articles freshly penned by other writers. It would require some buffer articles to be written by other creative team members—so I did not end up hurling myself off a cliff in the madcap, jam-packed month of October. Then, of course, it would require the writing of sixteen Taste the Magic article in the amount of time I normally write just four! Let me tell you, after that October, a four-month respite was not only welcome but a prerequisite to the retention of what little sanity I still have. (I have since gotten myself a homunculus, but lo, it is too late.)

As it turned out, things went pretty smoothly. Sure, there were some TTM topics that ended up getting spoiled by other columns a week or two earlier. There were some issues during the four-month down time that I would have liked to address but couldn't. Other than that, it went okay. I feel like telling you about this now because I think you all deserve top quality content from TTM, and that was a time when circumstances may have kept me from delivering it. Also, there is another reason why I feel like pulling back the curtain. It was at that same time in early October that Scott Johns and I firmly wedged the piece of demoncorn in between my teeth. It was then that we decided when my run as your Taste the Magic host would end.

I am pulling the corn out. It has been very hard to concentrate on the articles of the now, to contribute to TTM's ongoing legacy in the future, knowing full well that I would not be a part of it. Now you know that next week will be my last week as your chef. I have absolutely no idea what I will write about next week, but, for some reason, I feel confident that something will avail itself to me in the next week.

One thing I learned about Wizards of the Coast, as if I had not mentioned this already, is that it is full of good, capable people. While I was there I saw people change jobs and switch responsibilities quite often. Since I have left, Magic jobs have been vacated, filled, and vacated and filled again. One might think that Magic would show the scars of these changes, that a hiccup would jostle the game, if only for a moment, when crucial personnel move onward or upward. But it doesn't. Magic is not Van Halen. There is no David Lee Roth at Wizards of the Coast that would turn Magic on its head if he left. Wizards is more like a Borg cube, full of talented and creative folks who can move to fill any post in order to keep the game dominating the galaxy without a hitch. The whole of the company has wizardcycling

My former job as Creative Writer / Names and Flavor Text Manager is just such a post. In an interesting turn of events, one of my last duties at Wizards was to find my own replacement. Many folks I talked to about this seemed to think it a cold and heartless thing for my bosses to expect me to do. "Hey Matt, why don't you go out and find the fellow who is going to take your dream job and your desk and your salary?" I did not see it like this. Wizards of the Coast is a different sort of company, and working on Magic is a different sort of job. It is less like a "job" where people "make" Magic, and more like a responsibility in which people are stewards, nurturing a tremendous, beloved pet. My bosses loved this pet, and they knew that I did too—so they trusted that I would be best equipped to find the person who could properly take care of little Scruffy.

As I combed the universe for potential replacements, I kept it in the back of my mind that this person would also take over the TTM kitchen. Scott Johns and I both felt it was important to turn TTM over to the new guy because that person would have a deeper exposure to the process of flavoring Magic than I would (given that I'd be 2000 miles away in wonderful Northeast Ohio.) As it turned out, in aforementioned Borg fashion, I did not have to look beyond the Darksteel walls of Wizards to find the guy. I paid my

and found a Wizard with just the right abilities. He distinguished himself not only through years of quality name and flavor text writing, his good showing on the name and flavor text tests we gave out to applicants, but also through one little flavor text submission he made while we were working on Ravnica. While most of the writers fight tooth and claw to get their submissions printed on cards, this guy caught my attention with a submission that looked something like: "Use the second one on the list, it's awesome." What this said to me is that this guy is not all about seeing his fingerprints on cards. He's not about the extra little cash spiff he'd get for an accepted submission. He cares about Scruffy. Something tells me he's going to care about you, too. 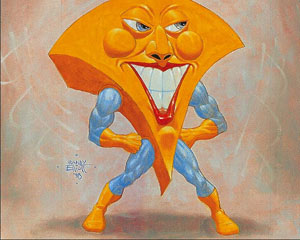 I think TTM is going to be better for paying its three mana and searching for this new guy. I would have liked to continue writing, but I have not been in the trenches for a year. I have not been in the meetings where creative philosophies are discussed, where big decisions are made, where policies are formed. Over the last year this column has served to keep the flavor of Magic in the front of minds, but has done so largely through my own rogue opinions and hermetic ramblings. For a while now I have not really been able to give you the sort of flavor-related goods that this column should be known for. (The good news is that all that good stuff is right around the corner.) While I am extremely proud of what I have written, and of the way TTM has raised the profile of art and story fans everywhere, I do feel that having an insider back at the helm will be good for all.

Ha! I just realized something I might write about next week: your new culinary Wizard. It just occurred to me that I have not mentioned his name. I guess I'll just let you mull it over 'til next week. You can gab about who you think it might be. At the very least, you can all pile on the few jokers out there who think the Sammy Hagar years were Van Halen's best. However you choose to spend the time between this sentence and TTM's next one, remember that I am very proud to have given you your inaugural spoonful of Taste the Magic, and that I will sorely miss writing for and hearing from all of you—even you, Mr. Drearypants.