When your opponent is clearly going to finish you off in a turn or two, do you concede, or stick it out?

Kelly Digges: My answer to this question—and, I suspect, a lot of other players'—depends a great deal on the context. At a late-night draft, with other players waiting to switch opponents and wanting to get to bed sooner rather than later, yeah, I'll concede when it's clear I can't win. In a competitive setting, I'd weigh the options; if there was any chance of me winning, or if I wanted my opponent to think there was a chance of me winning, or if I thought my opponent could still screw it up, I'd stay in. If it's clear to all involved that there's no card in the format that could get me out of my bind, I'd scoop.

Casual, though, is a whole different story, especially if it's multiplayer (and the so-called "strategic concession," or if it's just two people and nobody else is waiting to play. I don't know about you, but I don't play casual Magic with the primary goal of winning. If something awesome is going to happen, I don't want to miss it—or keep it from happening!—by scooping up my cards.

For example: In a recent one-on-one Planechase game, one of my co-workers hit the plane card jackpot. A couple of early acceleration planes shot him up to nine mana by turn three for a very early, very scary Darksteel Forge out of the artifact-centric "Metallic Dreams" deck. He then rolled to Sanctum of Serra, blew up my creatures when we left (but not his indestructible artifacts), and then, with an empty hand, planeswalked to the Academy at Tolaria West and drew seven cards. 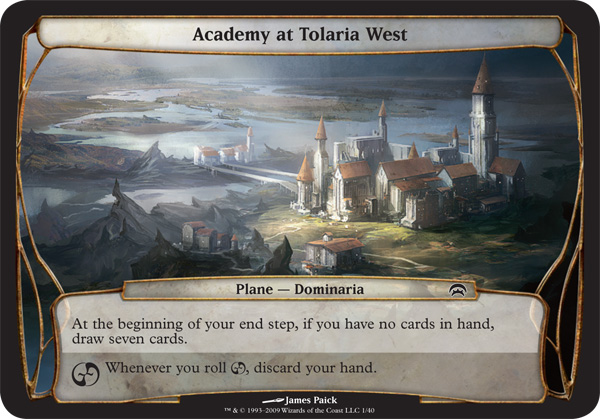 I myself, with the "Elemental Thunder" deck, had very little I could hope to do about all this. I was no longer playing to win, but to see how long I could hold out and what cool stuff was going to happen along the way. In the end, without any delaying or toying with me, he was able to attack me with an enormous army of indestructible artifacts. We happily tallied up an astonishing 86 damage in one turn, laughed about how ridiculous the game had been, and parted ways with a fun story to tell.

That's a lot more fun in my book than "I scoop."

When your opponent is clearly going to finish you off in a turn or two, do you concede, or stick it out? Click the Discuss link below to tell us your story and then see what everybody else has to say!