Kelly Digges: I've got to give props to Foresee for its freaky art, Goblin Balloon Brigade for being hilarious, Relentless Rats for relentlessly coming back yet again, and Platinum Angel for being Platinum Angel, but ultimately, my favorite returning card has got to be Fling. I couldn't tell you how many times I've Flung some gigantic creature at somebody's face for the win, but it is not a small number. 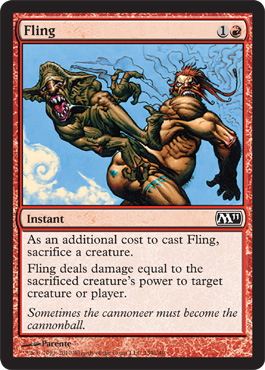 As for new cards, that's tougher, partly because M11 is full of really exciting new cards and partly because I really love new cards. All of the Titans are awesome, particularly Primeval Titan (and Grave Titan for a Zombie deck). Augury Owl is a tempting choice given my vendetta against Sage Owl. Leyline of Anticipation gives you an effect you want (flash for all your spells) exactly when you want it (before you cast any spells). Chandra's Outrage reads to me like a Char that puts the 2 damage where I want it. Then there's Garruk's Packleader, Ancient Hellkite, Temple Bell, Hoarding Dragon, Angelic Grand Arbiter Augustin IV, Demon of Death's Gate ... Is it the Prerelease yet?

For reasons I can't quite explain, though, the card that has hit me hardest is Phylactery Lich, masterfully previewed last week by Doug Beyer. 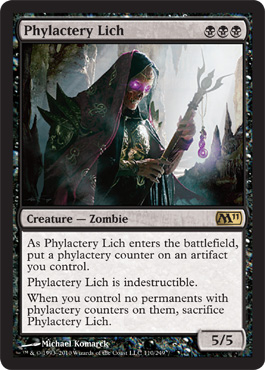 I don't know what it is. Maybe it's the top-line fantasy concept. Maybe it's the idea of a Phyrexia vs. the Coalition style mono-black artifact deck. Maybe—okay, probably—it's the indestructible 5/5 for

. Or maybe it's that tantalizing drawback that has me digging through my collection for Darksteel Pendants.

What's your favorite card in the Magic 2011 Visual Spoiler so far? Click the Discuss link below to tell us your story and then see what everybody else has to say!