What's your favorite token in Magic, and why?

Monty Ashley: It might not being the biggest creature ever (in fact, I'm fairly sure it's one of the smallest) but I have a great fondness for the Plant token from Worldwake. I don't care whether I use Avenger of Zendikar or Khalni Garden to get one; there's just something about having a Plant that makes me happy. 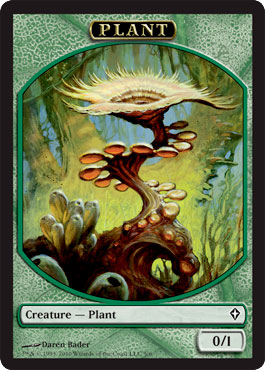 Here's why: many years ago, I lived with a cat named "Plant." It was my girlfriend's cat, and she named it after this Sesame Street cartoon she vaguely remembered in which a guy says "Wake up, Plant!" Then he tries several things to wake up his plant before remembering to pour water on it. I believe her goal was to wake Plant up by pouring water over her head, but that never actually happened. As far as I know.

Now, Plant was an active kitty. She was always pouncing on things and generally acting like a mighty hunter. And I got in the habit of shouting "Get 'em, Plant!" whenever she was on the trail of a particularly dangerous clump of dust. So you can imagine how delighted I was when I first played in a Zendikar / Worldwake draft and had the following game:

Incidentally, I should also mention that I'm also pretty fond of the adorable cartoon Plant tokens on Inkwell Looter. But they're still not as cute as Plant was.

What's your favorite token in Magic, and why? Click the Discuss link below to tell us your story and then see what everybody else has to say!