What's the weirdest situation in which you've discovered another Magic player?

Kelly Digges: I play Magic a lot when I'm out and about , so I've run into Magic players in plenty of unexpected places: restaurants, hotel lobbies, even passport control. But the weirdest encounter, believe it or not, actually took place at a Magic tournament.

Flash back to the 2006 U.S. Nationals in Atlanta, my first event working as the event coverage editor (the gig that soon afterward led to my current job as editor of Daily MTG). I arrived late in the evening of Day 1—as much time off as I could get, unfortunately—to find the rest of the coverage team in the hotel lobby. They'd managed to pull together an Ice Age / Alliances / Coldsnap draft, and were complaining loudly about the format while playing out their games. Playable creatures were at a premium—Hyalopterous Lemure is an easy first pick—and nearly everyone was playing more than a dozen of the 15 cards they'd picked up during the Coldsnap booster.

As you'd expect at an event like this, the lobby of the hotel was thick with Magic players. But, we learned, there was also a scrapbooking convention taking place on the same weekend in the same hotel. The scrapbookers and the Magic players in the hotel lobby were like oil and water: not easy to mix up.

The unexpected twist came when one of the scrapbookers—a genial woman in her 40s or 50s—saw the cards on the table, exclaimed "That's Magic!" and asked us if we were here for an event. Randy Buehler, future Pro Tour Hall of Famer and then director of Magic R&D, told her about the Nationals tournament, and she mentioned that her son plays Magic. He was in his 20s and had recently gone to Texas to play—probably for Regionals, given the timing. 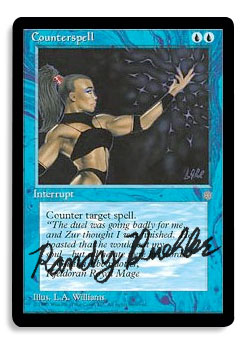 It was at this point that columnist and coverage reporter Brian David-Marshall leaned over and whispered to her exactly who she was talking to. She started to gush excitedly, and Randy, taking it all in good humor, started looking around for a card to sign for her, and BDM pulled through with a mint-condition Ice Age Counterspell, a Randy Buehler signature card that he just happened to have in a draft sideboard a decade after the set's release.

Randy signed the Counterspell, our coverage photographer Craig Gibson snapped a picture of our new friend with Randy on her camera, and she called her son and passed the phone to Randy.

So, the short version of my answer to the question isn't "at U.S. Nationals," but "on a scrapbooker's cell phone in a hotel lobby." Did not see that one coming!

What's the weirdest situation in which you've discovered another Magic player? Click the Discuss link below to tell us your story and then see what everybody else has to say!