Who's your favorite Planeswalker character, and why?

Dave Guskin: There are a number of Planeswalkers I like: Jace for his "think your way through your problems" mentality, Chandra for her devotion to freedom of action, Nicol Bolas for his incredibly long-term and eeeeevil plans. The character I appreciate the most, however, is Venser. 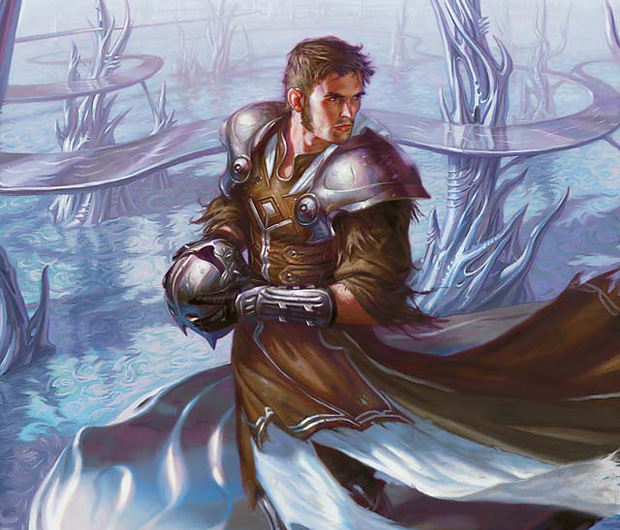 Venser shares my own color identity, white-blue, and is a teleporter, my favorite kind of superpower. He's always on a quest to improve the world and his own knowledge, and is devoted to the people he cares about despite his power. I guess I love Venser because he represents exactly the kind of Planeswalker I would want to be.

I love how the story of Venser plays out over many expansions. Venser is a native of Dominaria, Magic's first plane and always close to my heart (I started Magic in the days of Antiquities). His first incarnation, the card Venser, Shaper Savant from Future Sight, shows him well on his way to becoming one of the first of the new breed of Planeswalker... mortal, yes, but powerful and masters of their own destinies. He makes mistakes—Koth confronts him because his intellectual experiments could unleash horrors on the Multiverse and he doesn't realize it—but he learns from them. On Mirrodin, he was shown to us as a fully realized Planeswalker, searching for his mentor Karn. I love how the old and new are bridged via the Karn-Venser connection... which eventually culminates in the sacrifice Venser makes to save Karn from the Phyrexians. *single tear*

Sure, it's a dramatic story in a fantasy world, but it still tugs my heartstrings.

Who's your favorite Planeswalker character, and why? Click the Discuss link below to tell us your story and then see what everybody else has to say!