If you could hang out with any Magic character for an afternoon, who would it be and why?

Doug Beyer: I'd definitely choose a planeswalker. And my goal would definitely be to pick their brains, as I'd want to hear all about what they've seen and experienced while gallivanting around the Multiverse. Therefore you might think I'd go with someone like Sorin Markov or Nicol Bolas, someone who'd been around for a long time and had a vast store of knowledge. But aside from the threat of personal injury during our casual afternoon together (those guys look out for Number One, you know? and I am Number Something-Large to them), I'm not sure that the structures of their minds would be mortal-relatable enough for me to even grasp what they were telling me. I'd feel like a scratch-off contest winner having tea with Einstein. Or the other way around—they'd be so locked into their mindset from extreme longevity, so powerfully jaded from having seen squillions of lives and civilizations rise and fall, that they'd believe mostly in the power of age and death, and we'd spend the afternoon cursing our consciousness and quoting Schopenhauer. 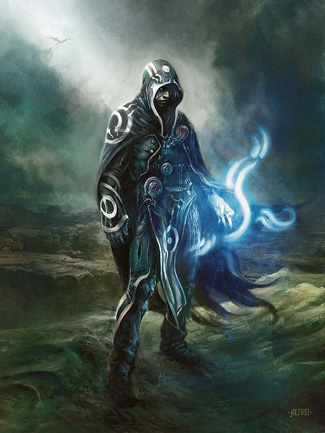 So, no, I wouldn't go with the old-schoolers. I'd go with one of the five M10 planeswalkers. I'd hang out with Jace Beleren.

Absolutely I'd like to pick the brains of Ajani, Liliana, Chandra, or Garruk. But Jace is the mind-mage. A conversation with him—assuming full mind-magic engaged—would be more than a good story; it'd be a life-altering experience. Mind-to-mind contact. Direct perception of the thoughts of another person. Not just a window onto a planeswalker's mind, not just a download of what it's like to travel beyond one's own world, but the complete dismantling of the barriers between two human beings. I've always wondered if it's the same inside somebody else's brain as it is in mine—that's a problem that has plagued philosophers and cognitive neuroscientists alike—and Jace has the power to answer that in the space of an afternoon.

It'd even be worth the awkward small talk afterward.

If you could hang out with any Magic character for an afternoon, who would it be and why? Click the Discuss link below to tell us your story and then see what everybody else has to say!