How do you store your cards?

Kelly Digges: While I don't have quite the fancy storage featured recently in Magic Arcana, I think I've got a pretty good setup. I keep my cards in 4,000-count card boxes (or "big white boxes," although they're not the biggest ones, and I suppose they could probably come in colors other than white) on a shelving unit bought specifically for that purpose: 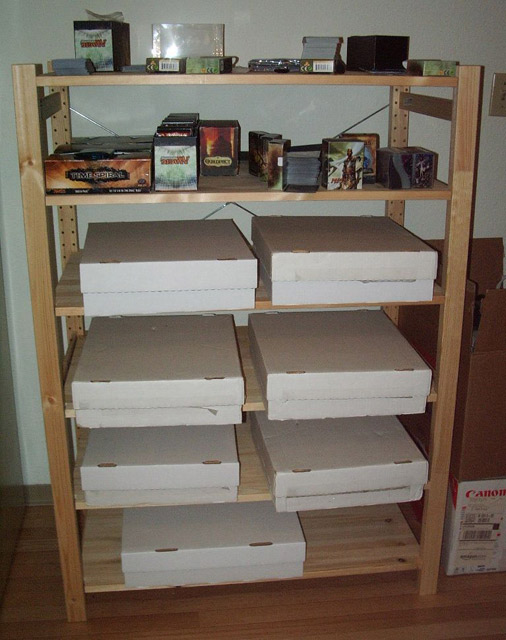 I've shown that image in my column, but I can talk a little bit more about my system, such as it is. The top shelf generally holds decks in progress—piles of cards that are going to become a deck, or the piles of cards left over after some other cards became a deck. It has also, like any flat surface, become a repository for stuff I don't know where to put, like sleeves. The next shelf down holds sealed packs, unused fat pack boxes, and finished decks that don't fit in my traveling case. The bottom shelf holds a 5,000-count box for basic land, which is way bigger than I needed—but unlike the 4k boxes, it has five rows.

The other three shelves, of course, are dedicated to those 4,000-count boxes, which you should be able to pick up at any hobby store—they're cheap. Within those card boxes, from left to right, front to back, cards are ordered by set (in chronological order with a few exceptions for core sets, Un-sets, etc.), then rarity (highest rarity in the front), then color within each rarity and alphabetical within each color. There are, of course, fun exceptions to these rules for "timeshifted" cards and such; generally, I go by the collector numbers.

Some people have asked why I separate out the rares; doesn't that just mean I have to look in three places instead of one when I'm looking for white cards from Lorwyn or whatever? Yes, it does—but bear in mind, for some sets, particularly Lorwyn, I have many, many copies of the commons and uncommons (which I keep around to give to those less fortunate, fold into Menger sponges, or whatever). My one or two copies of Militia's Pride and Mirror Entity would be sandwiched between stacks of Lairwatch Giants and Neck Snaps, and they'd actually be harder to find.

The shelves, which I've gotten a few questions about, are from IKEA, and they were very reasonably priced as shelving units go. They're modular; there are different heights available for the sides, and you buy whichever one you want and place as many shelves as you want wherever you want. Thus, the answer to the obvious problem that I am running out of space may not be to consolidate or relocate the top two shelves, but to get a new shelf and squish the spacing a little. Of course, that will only really work once ....

How do you store your cards? Click the Discuss link below to tell us your story and then see what everybody else has to say!