What card from the Visual Spoiler are you most hoping to open at the Prerelease?

Dave Guskin: Our company Prerelease happens in much the same format as Prereleases out in the world-at-large, including Mirran and Phyrexian faction packs, so I will of course be choosing to open Phyrexian packs—I'm an old school fan of the Great Work, and compleation of those outmoded Mirrans is close at hand. All will be one!

*cough* So yes, right, the question. The card I'll most be hoping to see in the back of my booster packs, from among the ones on the Visual Spoiler, is Bonehoard. I was in an early Scars playtest where there were Equipment with the Walkabout mechanic, which played great (not surprising!) and eventually evolved into living weapon in Mirrodin Besieged. Living weapon is a great way to shove more equipment into a deck without skimping on creature slots, and at the same time, it solves one perennial problem with power-boosting cards—what if you don't have any creatures around to boost? 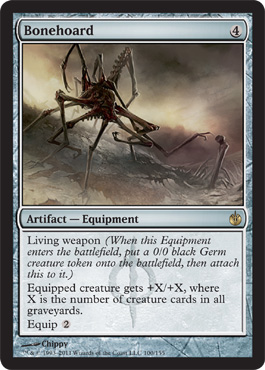 Bonehoard is the poster child for late-game smashings with those two points in mind—it's not only excellent in the late game when my opponent has killed off all of my stuff, but it is in fact POWERED by the very minions my opponent thought gone. My hope is to combine it with a number of sacrifice effects (Perilous Myr, Throne of Geth, and more!) to get extra value from all of that death. How very Phyrexian! (Mwa ha ha!)

What card from the Visual Spoiler are you most hoping to open at the Prerelease? Click the Discuss link below to tell us your story and then see what everybody else has to say!