From the R&D whiteboard: What's the hungriest creature in Magic?

Today we're trying something a little different. The above question first appeared on the infamous R&D whiteboard a few weeks ago. The resulting "discussion" looked like this: 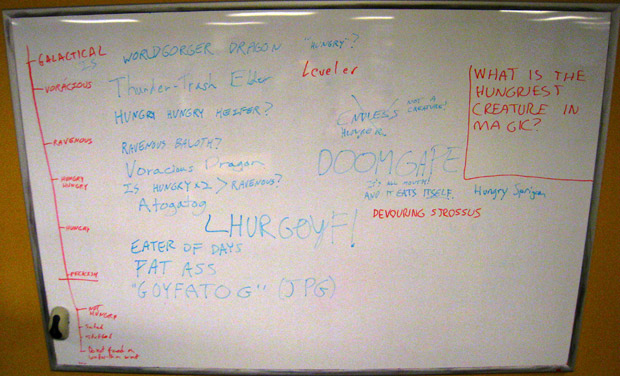 The bottom of the continuum on the left, by the way, reads "do not feed another wafer-thin mint."

And no, we don't know what a "Goyfatog" is, either.

Below, a few R&D members argue in favor of their chosen creature:

Monty Ashley: After careful consideration, I believe that things that are Ravenous Rats are hungrier than things that are merely Voracious Dragon or even Hungry Hungry Heifer. And of the "ravenous" cards, only one is a creature that's also defined by its hunger. I give you Ravenous Vampire, the hungriest creature in Magic.

Kelly Digges: Worldgorger Dragon almost got my vote, but it was pointed out that one can gorge without being hungry. In fact, once Worldgorger Dragon eats everything in sight, it's so stuffed it can't even keep it all down. So Doomgape is my answer, for the reasons listed on the whiteboard.

Mark Rosewater: Fat Ass: Its hunger is so great it makes any mage summoning it eat.

What's the hungriest creature in Magic? Click the Discuss link below to make your case and then see what everybody else has to say!