If you could go to any Magic character for advice, who would you go to, and why?

Kelly Digges: Tough call! For starters, I'd definitely go with a planeswalker—no offense to Magic's many brilliant and interesting legends, but planeswalkers have a perspective and breadth of experience that the plane-bound just can't match.

Of the known planeswalkers, three stand out as having the most of that valuable experience: Nicol Bolas, Planeswalker, Sorin Markov, and the artificial planeswalker Karn. But Bolas and Sorin, while both brilliant minds with thousands of years of experience behind them, are both a little too black-aligned to advise me in accordance with my values ... and Karn currently resides, half-corrupted, in his own private hell beneath the surface of Mirrodin, monitored by the Phyrexians for signs that he is ready to take his place as their new Father of Machines.

So that leaves the others—the merely mortal, with years rather than millennia of experience walking the planes. They've all got their virtues and their flaws, but if I have to pick one, I'm going to go with Elspeth Tirel. 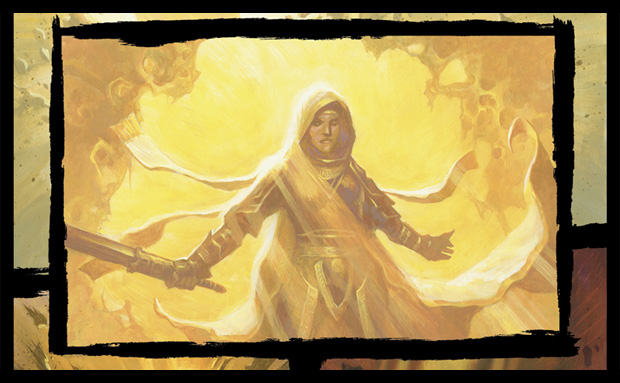 It's not that Elspeth hasn't made some questionable choices. On the contrary, it's the fact that she has made mistakes, let down people who were depending on her ... and learned from it. After seeing her own world overrun by Phyrexians and Bant subsumed in the Conflux, Elspeth was reluctant to fight for Mirrodin—reluctant to face her fear, to get involved in another war for another cause that might be doomed like the others. But in the webcomic Scarred, Part 2, a Vulshok woman confronts Elspeth with the need to act in the face of evil, and Elspeth gets the message. In Part 3, Elspeth faces her fears and saves the lives of her companions Koth and Venser.

That kind of courage in the face of a very personal fear is exactly the kind of quality I look for when I'm in need of advice.

If you could go to any Magic character for advice, who would you go to, and why? Click the Discuss link below to tell us your story and then see what everybody else has to say!