Suppose you were setting out on a week-long Magic cruise, as dozens of players did last weekend. What decks, packs, and cards would you bring, and why?

Kelly Digges: The first thing in my suitcase would be lots and lots of booster packs for drafting. If possible, I'd try to bring something on the order of two full boxes of Zendikar and a box of Worldwake, plus maybe some packs for one of my favorite two-player Winston draft formats, the bizarre Shadowmoor / Alara Reborn.

I'd also make sure to bring enough basic land to comfortably outfit an eight-player draft. There are few things worse than losing an entire draft to mana-screw, and while I'm sure there would be lands available on the boat, wouldn't I feel dumb if there weren't?

After that would be the decks—specifically, my box of 100-card EDH decks. My heavily Goblin-themed Wort, Boggart Auntie deck is fun times, as is my mono-green Multani, Maro-Sorcerer concoction (which mostly makes everyone draw cards). Rounding out the roster would be Sharuum the Hegemon (probably the most powerful), the stealy-riffic Nicol Bolas, and glass cannon Uril, the Miststalker—enough decks to outfit a full five-player table without taking up too much room. 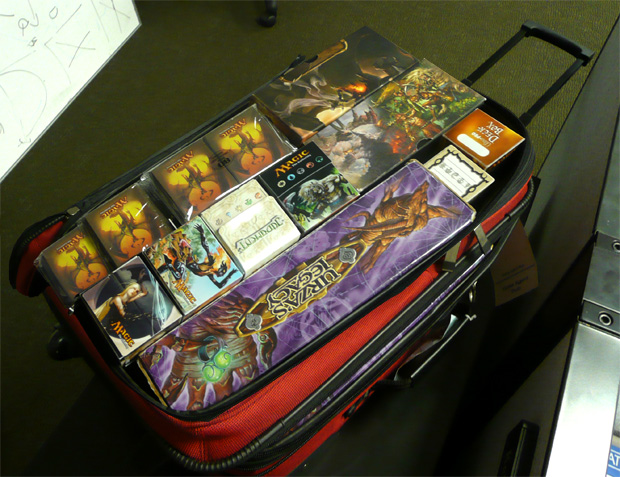 The only other absolute must-bring would be the Planechase planes and dice. There is just no better way to Timmy up a game of Magic than to start rolling that planar die.

Beyond that would be all the usual dice, beads, and tokens—and I might even remember to pack clothes.

Suppose you were setting out on a week-long Magic cruise. What decks, packs, and cards would you bring, and why? Click the Discuss link below to tell us your story and then see what everybody else has to say!