Who's your favorite commander?

Ken Nagle: My favorite commander is The Mimeoplasm, a legendary creature showcased in the "Devour for Power" Magic: The Gathering Commander deck. I've been wanting to make a "combine two creatures-into-one" Clone for about four years, and Mark Rosewater tried way back in Tempest with Dracoplasm. The Mimeoplasm (called "The Amalgamation" in design) went through many iterations to arrive at the printed version that both is fun and works rules-wise. During playtesting, The Mimeoplasm had many fans, even opponents being attacked by it! 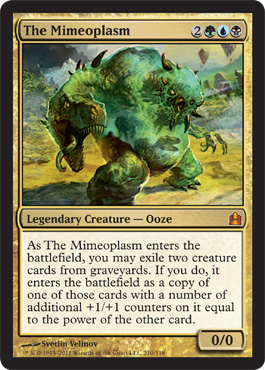 Here's just one potential creature The Mimeoplasm could become:

Here are just a few reasons why The Mimeoplasm is awesome:

Who's your favorite commander? Click the Discuss link below to tell us your story and then see what everybody else has to say!