Do you have any fun stories from this weekend's Prerelease events?

Kelly Digges: As a Limited fanatic and a Magic 2012 developer, I was really looking forward to M12 Limited. I had a blast at the Employee Prerelease, bashing people all day with an aggro bloodthirst curve that topped out at Volcanic Dragon, Carnage Wurm, and Warstorm Surge. (Casting Warstorm Surge with Volcanic Dragon in my hand made me a bit giddy.)

On Saturday, I headed out to Card Kingdom in Ballard with my wife Laura and Tom LaPille. Card Kingdom has a huge play space and an adjoining restaurant and bar called Café Mox, so we were actually able to play a number of our matches while eating delicious sandwiches and sipping the beverages of our choice.

Rules Manager Matt Tabak was also there, and when we didn't immediately find people to play against, we shuffled up our Employee Prerelease Sealed decks against each other. I had an early Scepter of Empires, which I'd been using to great effect to turn on my bloodthirst creatures and keep the pressure on. He then cast Crown of Empires, and we joked a bit about whether someone else had the throne.

Matt then cast his own Scepter of Empires. Tom LaPille had estimated the odds of opening all three Empires artifacts in your Sealed pool at a very-much-not-guaranteed 1:100, though, so I wasn't too worried. In fact, I'd gotten off to a good start and had Matt on a good clock via a bloodthirsty 5/5 Gorehorn Minotaurs.

Then he cast Throne of Empires.

He had the throne. He had the scepter. He had the crown. My fellow subjects, Matt Tabak is your new Rules Emperor. 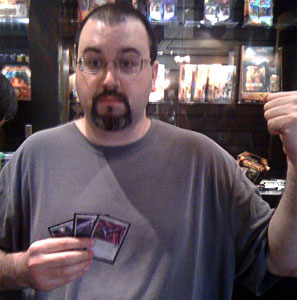 (I lost, obviously. The odds of beating the Emperor aren't much better than the odds of being one!)

Do you have any fun stories from this weekend's Prerelease events? Click the Discuss link below to tell us your story and then see what everybody else has to say!