What's the best trade you've ever made (trading Magic cards for Magic cards)? 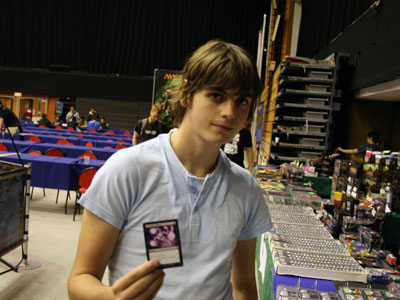 From Tim Willoughby, in the GP–Brighton coverage: At the start of the weekend, fellow coverage reporter Rich Hagon laid down a challenge to plucky Brit Matt Light. Starting with just a One with Nothing, he had to see what he could get. Matt was allowed to use the One with Nothing as a throw-in to a bigger trade, for something specific, but regardless, it needed to be a clear swap.

Within twenty minutes, that One with Nothing had become Garruk Wildspeaker. The full list of trades involved in getting it there were quite impressive—not least because they didn't particularly involve leaving anyone with a "bad trade."

Twenty minutes for a Garruk is pretty impressive. But what happens if you open a booster, and get a Garruk, but really want to be able to play Friday Night Magic? That one card alone won't help you much.

And so the real challenge was born. Taking a Warp World deck list from Jacob Van Lunen's Building on a Budget column, we challenged Matt to turn that lone planeswalker into a whole 60-card deck.

What Matt finished up with was far more than a stack of 60 cards. He had turned Nothing into something really quite special, and earned the title of GP–Brighton (Trading) Champion!

What's the best trade you've ever made (trading Magic cards for Magic cards)? Click the Discuss link below to tell us your story and then see what everybody else has to say. (And to read how Matt did it, check out the coverage!)