What's your favorite card in the Innistrad Card Image Gallery so far, and why?

Kelly Digges: What I love most about Innistrad is the way that so many of the cards tell stories—not across multiple cards, like we've done sometimes in the past, but with each card telling its own self-contained story. Case in point: my favorite card in the Gallery, Evil Twin. 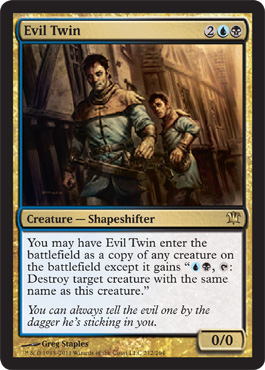 In Magic, doppelgangers and other Clone-type creatures can come off as pretty benevolent. Sure, they pack a punch when they're copying legendary creatures (poof!), but most of the time they're just this goofy, fun way to double up on your best creature, or match your opponents blow for blow.

In folklore, though? There's only one reason anything in folklore ever changes shape to look like you, and it's so it can murder you and take your place. At the very least, it's going to ruin your life by doing evil things and pinning the blame on you. Doppelgangers are Not Nice, and Magic's cuddly clones are only telling half the story. Don't get me wrong—it's a pretty awesome half, and I love a good Clone as much as the next player.

But Evil Twin tells the rest of the tale, and it's deliciously, delightfully gruesome.

What's your favorite card in the Innistrad Card Image Gallery so far, and why? Click the Discuss link below to tell us your story and then see what everybody else has to say!