What's the farthest you've ever traveled to play Magic?

When I was playing, I frequently traveled three hours north or two hours east from my hometown of Champaign, IL to play in Prereleases and Pro Tour Qualifiers—mostly because I love Sealed Deck—but it had never occurred to me to go farther. When I found out that StarCityGames, for which I'd recently started writing articles, was hosting Grand Prix–Richmond, I decided to take the plunge. 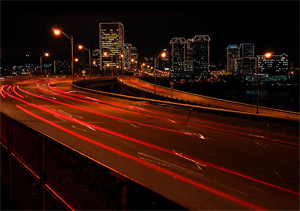 I found three great carpool buddies, and we piled into the car and made the trek. Some 800 miles and 14 hours of driving later, there I was in Richmond, watching pros play in the feature match area, chatting with other StarCity writers, and scraping to an absurd 3-1-2 record in the tournament. My only really memorable match involved a game loss for a misregistered deck (mine) followed by a mulligan to four (also mine) and then a quick, brutal defeat (shockingly, not mine). The real fun of the tournament, though, was meeting lots of other players and writers, and playing in—heck, just being at—an event that dwarfed every other tournament I'd ever been to.

As it turned out, that was the farthest I had the opportunity to travel to play Magic; I ended up working at Wizards before I could make the Pro Tour. (That totally could have happened somehow. For instance, everyone else at my local PTQ could have spontaneously combusted.)

As part of my job for Wizards, I've traveled to Pro Tours all over the world, but that trip to Richmond holds a special place in my heart. There's just something great about cramming in a little car, hashing out the latest strategies, navigating terrifying mountain passes in pitch darkness, and wondering together whether the next day will bring victory or defeat.

What's the farthest you've ever traveled to play Magic? Click the Discuss link below to tell us your story and then see what everybody else has to say!