If you became a planeswalker, what's the first Magic plane you'd visit, and why?

Jenna Helland: I'd go to Bant. Of course, castles and knights have been a fixture in my imagination since childhood. But I'd go for a different reason: to meet Elspeth, Knight-Errant. Elspeth is a reluctant planeswalker, and she's intrigued me since I first heard her story. Here's part of the description sent to artist Volkan Baga: 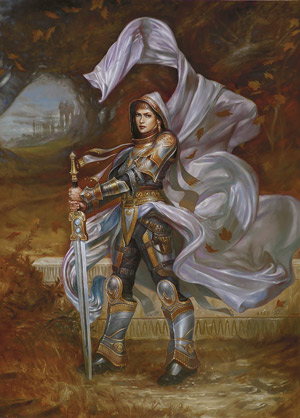 Elspeth is a capable fighter and champion of the nation of Valeron. Her past is a mystery to those around her. She became a squire to a Valeron knight at age 17, and was knighted at 20. But she is not from Bant, and she evades questions about her childhood. No one knows that she's planeswalker or that she was born in a place of horror and darkness. Her spark ignited when she was just 13 years old, and after fleeing her home plane, she never returned. In desperation, Elspeth sought a place she could call home. Then she found Bant. Elspeth's most notable trait as a planeswalker is that she doesn't want to be one anymore. She believes Bant is a true utopia, the best place she could ever make her home.

Elspeth's got it all: Baga's art is amazing, her abilities are incredible, and her story is rich with potential. Instead of losing herself in the infinite possibilities of the Multiverse, she found something worth dying to protect. For the moment, at least, she's at peace.

If you became a planeswalker, what's the first Magic plane you'd visit, and why? Click the Discuss link below to tell us your story and then see what everybody else has to say!