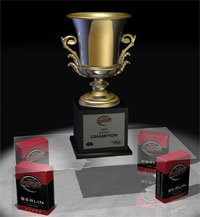 2003 marked the Tenth Anniversary of the Magic: The Gathering trading card game and the introduction of the Eighth Edition Core Set. As part of celebrating a decade of Magic, all cards from the Eighth Edition Core Set forward have a brand new card face. For this special Worlds tournament, Eighth Edition cards were allowed into the Standard Constructed format faster than normal, giving players a chance to use them for the first time in the biggest Magic event of the year.

We gathered four of the best decks from the 2003 World Championships held in Berlin, Germany. Each of these decks was constructed by a Pro Tour player for the Standard Constructed envrionment at the time, which included the Odyssey and Onslaught blocks and the brand-new Eighth Edition Core Set. Each deck features a 60 card main deck, 15 card sideboard, 12 proxy cards along with a decklist, and factsheet. These cards are gold bordered and feature the 2003 World Championship Deck backing.

ive Your Game A Solid Foundation

Play with four of the strongest decks in the world: The Magic: The Gathering 2003 World Championship Decks. Culled from the decks played by the best at the Worlds tournament in Berlin, these decks are a great way to improve your game and have fun doing so.

You can't go wrong with the top decks built by the world's top Magic players. Give your game a solid foundation: Get all four 2003 World Champ Decks today. 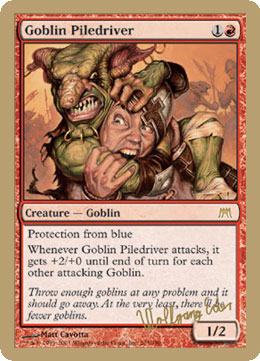 Catch every moment of the action at Worlds 2003 in Berlin with the Sideboard Online event coverage.