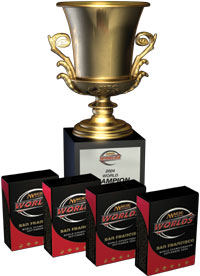 We gathered four of the best decks from the 2004 World Championships held in San Francisco, California. Each of these decks was constructed by a Pro Tour player for the Standard Constructed envrionment at the time, which included the Onslaught and Mirrodin blocks as well as the Eighth Edition Core Set. Each deck features a 60 card main deck, 15 card sideboard, 12 proxy cards along with a decklist, and factsheet. These cards are gold bordered and feature the 2004 World Championship Deck backing.

The 2004 World Championships was dominated by the powerful "Affinity" deck, which was almost entirely composed of artifacts from the Mirrodin block. Aeo Paquette took this deck all the way to the finals, where he was stopped by Julien Nujiten's green-white "Astral Slide" deck. Nujiten used Eternal Witness to gain great card advantage and became the youngest World Champion ever!

Manuel Bevand played a combo deck based around Krark-Clan Ironworks, which was good enough to get him to the semifinals. In the quarterfinals, Gabriel Nassif's blue-white control deck met its end, but not before beating numerous Affinity decks along the way.

ho Are You Going To Beat Today?

We tapped into the decks of world beating Magic: the Gathering players and created four world-class decks -- the 2004 World Championship Decks. Culled from the best at the recent Worlds tournament in San Francisco, these decks are a great way to improve your game and have fun doing so.

Beat a path to your nearest retailer and get all four 2004 World Champ Decks today. 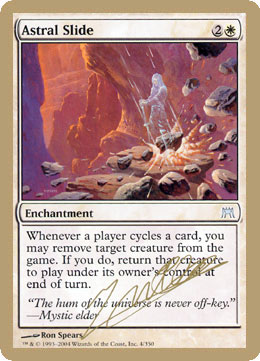 Catch every moment of the action at Worlds 2004 in San Francisco with the magicthegathering.com event coverage.